You wake up in a forest, naked and lying on your back.

As you stand up you realize something has been watching you, it seems to be a dog, a very big f*** dog, a wolf!

The wolf, bigger than you'd ever expect rushes in eager to attack you.

6 meters between you and the wolf is the line separating you from a one way ticket to eternal sleep.

You've got one chance, running is not an option, you've gotta endure through the pain as the wolf bites into you and meanwhile hurt it really badly in a weak spot.

What weak spots in a wolf can be severly damaged without weapons and cause the wolf to run away or be defeated?

An unarmed, unarmoured, unprepared human against a large apex predator? That can be expected to hunt in packs? That's a fairly clever hunter? That eats things that are substantially bigger, stronger, faster, tougher and more dangerous than humans?

Your best bet is to offer it a limb you don't need as much... your off-hand, perhaps. If you're lucky, it won't like the taste of you very much, and will give up. If you're really lucky, it'll choke on some of the splintery little bones, but I wouldn't pin my hopes on that. It is at least slightly more likely than plan B, which is hope that a tree falls on it.

What weak spots in a wolf can be severly [sic] damaged without weapons and cause the wolf to run away or be defeated?

The same weak points that any predatory mammal has. Realistically though, you will simply not be able to hit them... you are a naked ape, with limited capacity for resisting teeth and claws, you have no useful natural weapons, and you're trying to go one-on-one with an actual killing machine. You know how you don't hear many stories about people kicking bears in the balls, or poking tigers in the eyes, and escaping to tell the tale?

There's a reason for that. Don't fight apex predators on their own terms. You gonna get et.

(also, even if you did somehow manage this miraculous action, this is a pack animal, and do you really think you're gonna pull it off more than once? against multiple opponents? nope)

Consider though, it might not actually attack you. You're a funny shape, and a funny smell. You aren't much like its regular prey. Wolves aren't stupid. It isn't going to just charge in and attack immediately like a computer game random encounter. If it has rabies, it'll behave as you're asking, and then you're SOL (and even if you did survive, you've probably just contracted a deadly virus, yay!)

Your only hope is that it reacts like a normal, healthy wolf, and you're able to back away, take stock of the situation and start equipping yourself with the tools you need to survive. Cos without them, you won't.

This is a game. You aren't going to get killed in the first 10 seconds. 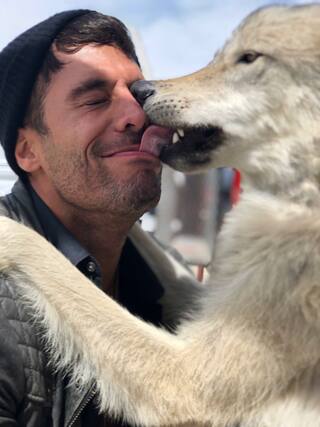 The wolf has been there. It could have killed you in your sleep but it did not. Why not? Now it is rushing in because you woke up. It is excited that you woke up.

If you stand your ground it will watch you. If you talk to it and look at its tail, it might wag its tail. If you hold out your hands it might come get a scratch. If you throw a stick it might go get it and crunch it up.

This is a game. A dire wolf sidekick will be cool.

Using examples of people attacked by dogs and jaguar, ram your fist down its throat. Your hand is large enough it can't bite down effectively once it is far enough in, and it will choke. This will be hard to do but not impossible, even if you are bit drive your arm deeper, no predator is ready for that, prey tries to escape it does not push deeper. Other wise ideas are to kick, punch, and grab, a human easily has the strength to rip a wolf's ear off or gouge an eye. Pin it if you can, humans are much better wrestlers than wolves.

Even better kick or try to pin the wolf first, lettings yourself get bit is stupid, a wolf is unlikely to let you go if it has your arm because it can drag you to the ground. Stay on your feet and hurt it first, predators are not movie monsters if you are strange and dangerous they will leave you alone.

Before it even gets to you grab rocks or soil and throw them at it, humans have defended themselves form predators by throwing things since forever, most predators are confused by projectiles, and a human can throw rocks HARD, hard enough to crush its skull. The mixture of oddity + pain + aggression = get out of there to a predator.

Even if it does not run away it will be far more cautious, which buys you time to find a better weapon or tree o climb.

If you successfully injure the wolf, it may leave you alone, animals are not movie monsters, they generally ty to avoid dangerous fights. If you are aggressive you are automatically a threat, if you do things that have never happened before then you are a strange threat to be left alone.

Just like sharks. The eyes. Creatures are psychologically inclined to avoid permanent damage (except eusocial creatures or a few outliers like badgers). Poking its eyes is your only chance of really threatening to deal permanent damage enough to at least let it back off. If it backs off permanently is the question though.

Look as big as you can make yourself look.

However, if you can, see if there are any large branches in convenient grabbing position, or trees you can climb. Use your ape advantages! With a branch you can go for its eyes. Rocks can do damage, and dirt can blind.

Note that the leafless branches low on trees often break off with no more than hand pressure, so be careful if you use them for climbing, but hey -- the other way gets you a club.

As famously reported by the man himself and illustrated by Jim'll Paint It, Brian Blessed once punched a polar bear when it invaded his tent. Apparently clocking the bear on the nose and loudly shouting at it to f*** off (and we know how loud Brian Blessed can be!) was enough to make it want to be elsewhere. When it comes to apex predators on land, polar bears are well in the running for top place, so if it works on a polar bear then it'll work on anything.

Predators, by definition, want to eat prey. They also want to not get injured in the process. If you look aggressive enough, regardless of size, there's a decent chance you can make it decide that there are easier meals out there.

Wolves (Dire or not) will go for the throat, this would be instantly fatal. If they grab your arm, the canines will pass straight through, they'll then (once you're crippled with pain and shock) seek a better grip on something vital. Don't let them bite you.

You'll need to be fast and bold.

Hold your forearm out horizontally as a point of aim for the attacker, then at the last minute (impossible to practice the timing, just go for it) drop it a few inches, then thrust it upwards with full force. This will have the effect of knocking the D-wolf's mouth closed and their head up.

Wrap both your arms around it's neck pressing your head against its and holding on as tight as you can. At this time the animal will try to bite whatever it can reach - ear, scalp. Ignore the pain, the growling, the claws raking your chest and stomach.

The thing will be jumping, snarling and writhing, trying to free itself, you must wrestle it to the ground. Your objective is to wrap your legs around its waste, cannids are not well protected there. Cross your ankles and using the strength in your quads - kick away with all your might. You might lose grip with the ankles at first, but lock them and kick again crushing it's gut up into its diaphragm. With any luck you'll have the strength to rupture the membrane and muscle between it's abdomen and its chest - thrusting its guts into the space it needs for its lungs and make it impossible for the creature to breath.

Keep kicking hard until you're sure that it's not going to put up any more fight, then pick yourself up and seek first aid for your missing ear, lacerated chest and half a face.

One friend got attacked by a Karakachan like dog because he patted a female dog of its interest. While dog was not super aggressive in general, it was a real attack. His quick reaction (before he could think about it) was to give it a uppercut which caused the dog to fly back whimpering.

1, 2 and 4 hit hard, 3 is caine specific, if You grab and hold then is posibility that wolf surrender and find You alfa male. But need a lot of strengh and agility to do that.

Can try to put arm in to jaw and rip throat from inside but that is so much risky.

Only option I see is to make like Ryan Hall. Dive for an ankle, wrap your legs around its upper limb, and use your entire body to put enough torque into its joint that it snaps.

It probably won't work though.

9
How would humanoid creatures with powerful jaws, claws, and a tail efficiently use their anatomy in barehanded combat?