What would be the physical characteristics of a sapient, mountain-adapted, gliding mammal capable of magically producing thrust?

My question is basically about what a gliding mammal that can magically produce thrust would look like, whilst meeting these criteria:

In the fantasy world I am working on, plants and non-human animals will sometimes develop "magical" adaptations. These will develop similar to evolution where a magically ability will sometimes randomly develop, and can be passed on to offspring. Magical abilities require higher energy use but not necessarily proportional to the amount of energy the physics of the ability requires. For that reason a "useless" ability is unlikely to become pervalent.

I am working on a gliding mammal that has developed some kind of limited ability to produce thrust and has a similar intelligence to humans.

For the sake of argument let's say they can produce a jet in a direction they choose for a limited amount of time per day. Let's say the jet produces a maximum thrust of 0.2 times their body weight, but add the limitation that using the jet at maximum force is strenuous so they would be able to do it for a shorter time.

I am open to other forms of generating thrust if you think they would work better.

Gliding seems to be a common adaptation that has independently developed many times. In mammals, this adaptation seems to develop in arboreal animals. A possible evolutionary explanation for this evolution is energy efficiency when gliding. Another possible explanation is the ability to avoid predators. It seems to make sense to say that this sapient gliding mammal evolved from some kind of arboreal glider before developing powered flight through their jet ability, allowing their ancestors to live in more mountainous regions over time. Another possibility is that the jet ability developed first in some mountain primate, rodent, or marsupial before the gliding membranes evolved. The jet ability may have been selected for to allow for better jumping.

A common feature of these gliding mammals, as far as I can tell, is that they are bad at locomotion compared to their brethren who have no patagium. 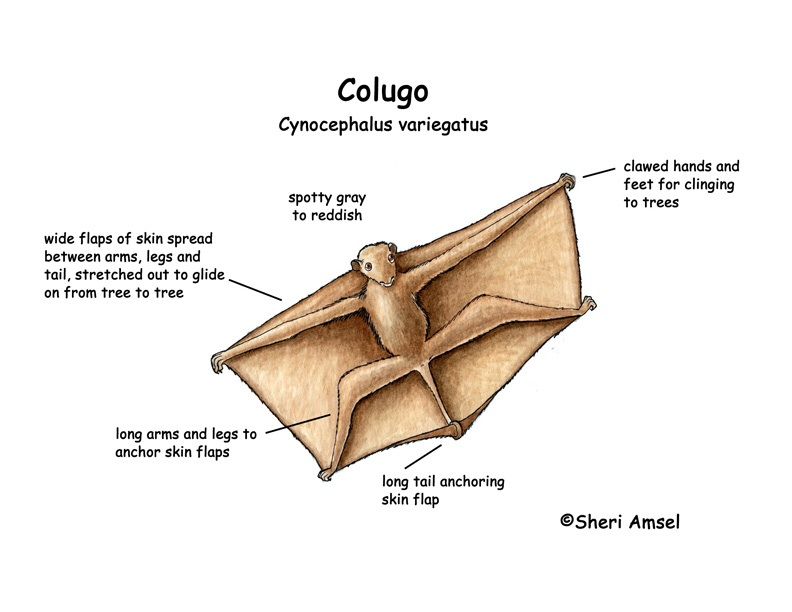 Wingsuits may also be a useful reference. The electric wingsuit developed by BMW might be a good illustration of the physics involved. The device puts out 20hp for around 5 minutes, but I am not sure how those numbers relate to my earlier suppositions about the creature's jet ability.

I am not particularly attached to any of these ideas, but they are the ideas I have reached after my research and hopefully they provide a good starting point. 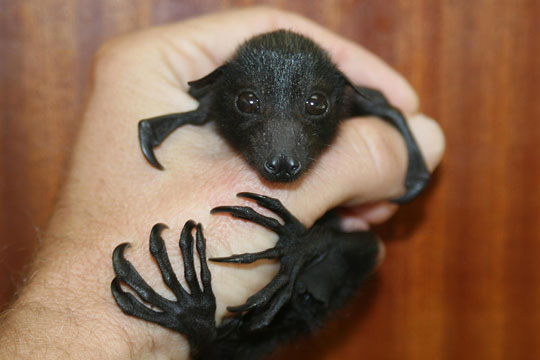 You are already thinking about colugos so I will take this in a different direction. Your creatures are bats. Just as humans have been on the ground a long time but our own bodies have evidence of adaptation for life in the trees, your sentients have been using agriculture and animal husbandry (probably more the latter if in the mountains) for a long time - maybe longer than humans.

The wing has more fingers than the single bat finger - more like a hoatzin or a pterodactyl. In the remote past these creatures could fly. Their close relatives (chimpanzee equivalents for us) can still fly and those things are out there. Tool use, intelligence and a different lifestyle selected for larger bodies in your sentient bat people and although their wings remain useful for gliding, these creatures are now too big to fly.

As adults. Little kids can still fly. Kindergarten is in three dimensions.

I think that you have the basic plan down. I'd suggest a magical ability to speed up the air flowing over their back(like an airplane wing). And then have them evolve from a normal Calugo that lives in the forested mountain valley's. Because of the magic needing more energy the creature evolved to be bigger. Then it moved up the mountains as it could sustain longer flights and oversee a larger hunting ground. The management of this magical ability and the necessity to hunt larger prey in groups drove the creature to become smarter and more social. If the magical ability is powerful enough then they may loose the palagium between the back legs and the tail. Allowing for a free tail that trifurcates near the end to create a hand of sorts. (the pokemon aipom)

This would keep the patagium between the arms and legs though. But in the mountains there are often winds going up and down. Smart creatures could use those natural currents to their advantage. By going down to catch a prey. Cut it up in pieces to store in a marsupial pouch. Then use those currents to get back up to their cave/home.

The ability to ride other animals is severely overrated. First of all the mountainous terrain is difficult to navigate. A flying mount is unnecessary for obvious reasons. And flying is plenty fast so you wouldn't need it for travel. for longer distances without pause then it may be useful. But a smart creature could easily invent a cart.

Not the answer you're looking for? Browse other questions tagged science-based magic creature-design fauna flight .

10
Alien Griffin Design
7
What practical forms can a "branch-tailed" organism have?
7
Anthropomorphic flying squirrel, gliding capability
8
Can a horse-sized flying creature grab and carry a human's weight while flying?
5
Evolution of flying skulls?
5
Anatomical Review: Would the way I designed this semi arboreal Imp be biologically feasible?
4
Increased flexibility for dragons?
9
Are there any major problems with my creature design?
5
Feasibility of a sand gliding creature?
6
What would be a propitious environment in which centaurs could evolve?