I was playing around with my planimal idea when it occurred to me that my world could reinvent fish if I simply tweaked the starting point then applied neoteny (i.e., if they grew to maturity while retaining their motile juvenile form). But being as I’m somewhat allergic to the mundane, I decided to limit neoteny to just the male form. That gave me the following:

juvenile form: As a juvenile, my species is a relatively good subcarangiform swimmer (although turned 90° so the undulations are vertical) with several feeding tentacles and fleshy fins.

original adult form: As they transition to adult form, they inflate a gas pocket on their back and lose their swimming features (fins, tail, etc.). Their feeding tentacles get longer and more robust. In addition (because this started with my planimal design) they activate photosynthesizing cells on their upper surfaces. And, of course, they fully develop sexually.

new adult form (male): Applying simple neoteny, the male form is a slightly larger version of the juvenile with a couple of changes. They are fully sexually mature (which is self-evident given they are adult form). They also get elongated pectoral and/or ventral fins with limited grasping ability to aid in mating.

To my knowledge, no earth species has this type of sexual dimorphism. It’s possible that I’ve missed something but, given the amount I’ve read recently on sexual dimorphism, I would have expected someone to have mentioned this if it existed. So, assuming it does not exist…could it?

I’m really trying to understand any challenges I need to consider so the more detail you can provide in any objections would be appreciated. Also, if I’m wrong and this does exist somewhere, please point me to the species.

Based on responses I'm thinking that maybe I should clarify my question. I attempt that below. Hopefully I don’t make things more confusing.

My goal here is a species that is radically sexually dimorphic but not with respect to size.

The adult male will essentially be a fish-like creature that swims the oceans looking for food and females. It will probably mate with multiple females over its life (and will likely try to mate with every female it encounters). Other than mating, the male is solitary (i.e., it will mate then move on).

The adult female, in contrast, will be a sessile floating creature somewhat like the Portuguese man-of-war (but not colonial) drifting with current and/or wind. It will use feeding tentacles to capture food underwater while also hosting photosynthesis on its upper side. It can also expect to mate with multiple partners over its life (it may or may not accept every male that comes along). I’m also using some form of sperm storage to increase genetic diversity. I haven’t worked out the details yet, but they will likely evolve to be able to attach to other females and form same-sex communities.

I’m using male-exclusive neoteny to get there. This can be seen as analogous to a sex-flipped version of the larviform female (i.e., the male retains what is essentially the larval/juvenile form).

Side Note: Probably not critical here but my world is a pure ocean world (no land, minimum depth of several kilometers). So there’s no worry about my females being blown onto shore since no shore exists.

Hopefully that clarifies my target here. If not, feel free to ask questions in the comments and I’ll keep trying to refine this.

I don't see why not. For a slightly strained example, consider common forms of gametes popular in sexual reproduction: mobile sperm, rather less mobile egg.

For better example (and a case of a fairly interesting and unusual animal in itself) consider Strepsiptera, an order of parasitic insects.

The larvae of strepsiptera are initially eyed and legged and mobile, but once they've located a suitable host and burrowed in they don't need things like that and so they grow up without them. The males undergo metamorphosis and have a flying adult form, but the females do not... they retain their stationary neotenous form and basically just stick out a bit from their host and waft pheromones into the air so that males might find them. Part of the female's body is exposed, so the males mate with that, and live larval forms are later released through it (making them viviparous insects, on top of the other weirdness).

So whilst it is inverted from your particular design, and involves parasitism, the basic plan of one sex being mobile and seeking out the other sex which does not have a fixed location but is instead moved about by some other agency is not only a reasonable idea but has been implemented at least once in real life.

Isn't it the case already of the overused example of the hangler fish? The male has no mobility since it becomes a sort of appendix of the female, which insteas can freely roam the sees.

This can be seen as the last step of sexual maturation, going from "boy" to "man" after finding a partner, mating and losing any ability to move.

Spiders have this system. 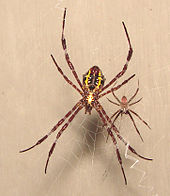 It makes a lot of sense. The spiders all start small and disperse as in your scenario. Mature females need bigger bodies and more food because they need the caloric investment in making eggs so they get big and they get sedentary. The males only contribute sperm, but they need to cruise around and find females so they stay small, like juveniles.

The spider female might also eat the male. That is another contribution to his juveniles that he can make and might be the price for getting close enough to deliver sperm. Some spiders have come up with a workaround: the male can give the female a nice silk-wrapped bug she can eat instead of the male while he mates and then gets scarce. Some males give the female a very elaborately wrapped pebble with the thought that he will be quick about his business with her and get out of there before she figures it out.

Not the answer you're looking for? Browse other questions tagged internal-consistency evolution xenobiology .