Harvesting energy from rain as efficiently as possible

The goal is to engineer the most efficient way(s) to harvest energy from rainfall using moderately advanced technology. My idea was to use this as widespread power source for a race of people that frequently have to deal rainfall. The technology level is space age but would of course started out as more crude and primitive. Unlike photovoltaics which are fairly recent (1800), this technology would be far more developed due to being simpler and centuries of optimisation. It would have started out as a simple means of spinning a wheel to powering a large part of their planet.

Given the Earth's surface area the globally averaged annual precipitation is 990 millimetres. Depending on their size, raindrops fall between 15 and 25 miles per hour no matter how high they are when they begin their descent. The average raindrop has a radius of about 0.2 cm and a mass of about 0.034 grams. That is (excuse my poor math) 3.825J to 10.625J of energy per raindrop on average. There are two means of harvesting electricity from rain; water turbines and nanogenerators. Neither method is more efficient than photovoltaics, however rain power is based on gravity. This is interesting because in theory: the higher higher the harvesting device, the more energy that can be produced.

New research has found a method that could generate enough power from a single droplet of rain to light up 100 LED bulbs. That's a big jump forward in efficiency, in the region of several thousand times.

This is all very exciting but for now still remains in the experimental stage. Regardless I'd like to use this as a staple in my worldbuilding because it's clean renewable energy based on the water cycle. The difference from solar farms will be the design of the technology, which I think will be more vertical than solar panels which focus on covering a wide surface area. There's also the advantage of rainwater harvesting for use in households. So I'd like to know what design would be best for devices that harvest energy from rain.

Any reason that the same thing we use cant be used? Hydro electric power and dams. This graph shows the world power percentage from hydroelectric power. 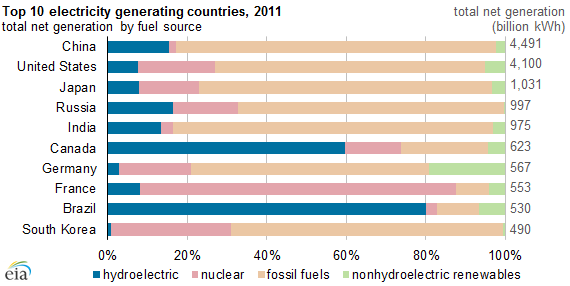 Note Brazil at 80% from hydroelectric power. According to this wikki brazil gets "between 1,000 and 1,500 mm a year". It also refers to the rainfall as varying wildly, so if you have the very high precipitation you have in your world and its constant than hydro electric power is the perfect source of energy for this world.

Water wheels have been used since the antiquity. The Roman empire made extensive use of water wheels to power mills and industrial equipment.

Water wheels work by harnessing the kinetic energy of a stream of water. The stream of water comes from uphill. How did the water get uphill so that it could flow down and power the water wheel? It got uphill by being evaporated from the ocean by the sun, then condensing and raining onto the hills and mountains.

P.S. Don't bother with trying to get useful power from the kinetic energy of rain.

Using the numbers in the question, for every square meter we have, over the course of one year, one cubic meter of water falling with a speed of (generously) 11 m/s.

For comparison, average solar irradiance on the surface of the Earth is about 250 W per square meter; that is 125,000 times larger than the average power of the kinetic energy of rain.

I would say that hydropower remains by very far the best method to extract energy from rain.

As indicated by AlexP and Kezat's answer, deriving energy directly from water is a matter of hydropower, as it is normally done. Create a reservoir, let Newton do the job.

Rain water could have a role in other types of green energy though, like

When using excess heat from industry, clean rain water can be put to good use to transport the heat out safely, that is for direct use by consumers in their house, or food industry.

Not the answer you're looking for? Browse other questions tagged hard-science weather engineering power-sources .

7
Entirely too much mana from the heavens
9
How to efficiently protect a city from constant snowstorms?
14
How efficient can my neutrino detector be?
29
How can I make raindrops bigger?
9
Horizontal lane separation for flying cars?
6
Would a permanent rain be possible?
6
Where could you store the energy from a tornado?