In this recently posted question, and any other question involving strong but prehensile tails capable of holding large or heavy objects or creatures, it seems the knee-jerk response is "that's not possible, flexibility and strength simply don't go together in tails."

So, on risk of starting a tangent, WHY? I get that it's not very realistic, but come on, this is worldbuilding.stackexchange here! Making crazy stuff plausible is kind of the point! So, why not? Surely, considering the brilliant minds here and the incredible potential of biology (albeit with some gene editing), there is a way to get a strong yet prehensile tail, and not just an awkwardly placed arm.

So, that small tangent aside, my question is How Can A Strong Yet Prehensile Tail Be Realistically Achieved?

1. As indicated in the question, I am asking on the feasibility of a specific organ, specifically a strong and flexible tail. Additionally, all answers should be science-based and be able to back up their reasoning. I am not a biologist, so this will be science-based instead of hard-science until further notice. However, I am a logician, and while I appreciate and respect answers, I will point out anything that seems off in an answer's reasoning. TL;DR: The best answer will have sound logic and the evidence to back it up. 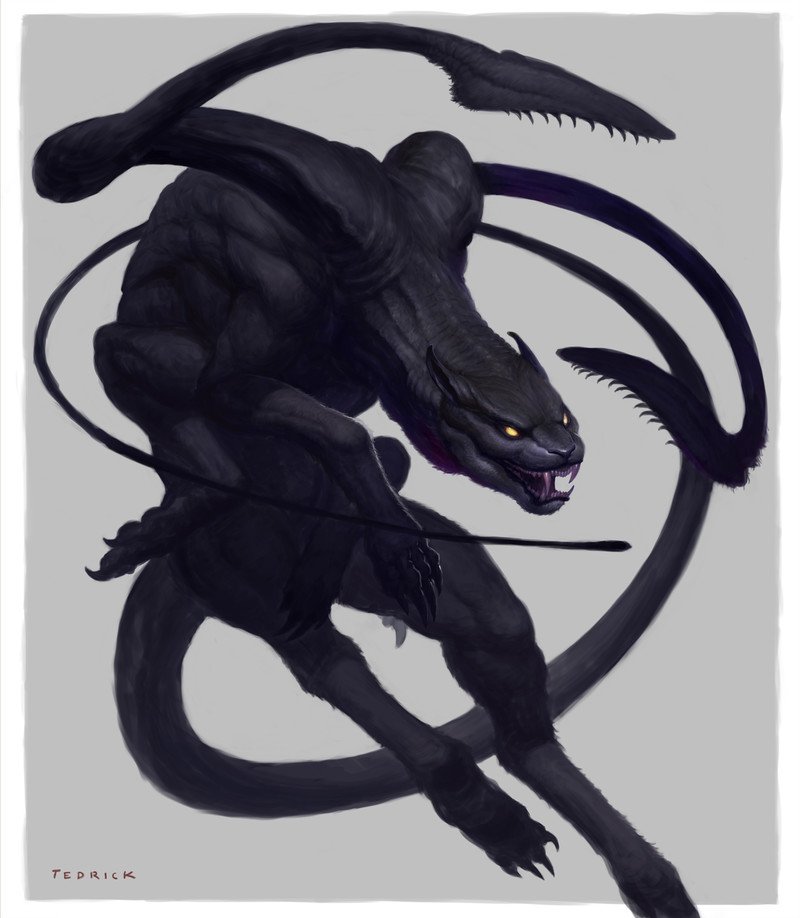 The critter above is a displacer beast, a creature from a classic ttrpg game called dungeons and dragons, and I'm not only using it due to a recent addiction to the game, but because if nature is anything to go by, the best anatomical option for something that is very flexible yet very strong is not a tail, but a tentacle.

The first part, flexibility, is very obvious: no matter how flexible a tail is, it's inevitably hindered by its own bones, which at the end of the day can only really bend in the regions between the tail vertebrae. A tentacle on the other hand is a muscular hydrostat, which in this case pretty much means a boneless limb that's mostly made of various muscular arrangements that anchor to one another for the most part. No mater how you look at it, a boneless tentacle will almost always beat any tail in terms of flexibility.

Second thing is strength: you know how tails are an association of bone, muscle and other things? Well a tentacle is mostly made of muscle and has no bones to take useful space inside (because in a tentacle, muscles are basically supported by more muscles). Want some examples? Well an elephant can lift about 700.000 pounds (about 317 kg) using its trunk and we have recorded cases of octopuses lifting 4 times their body weight with their tentacles (also, we've had cases of octopuses snapping shark spines, and the giant pacific octopus can hold over 30 pounds on a single sucker). In addition, both octopuses and African elephants are known to be extremely dexterous with their limbs. Elephants can easily hold brushes, pluck single blades of grass and hold onto potato chips without breaking them using their muscular trunk, while octopuses are known to engage in tool use and operate cameras.

So basically, if you can choose between giving them a prehensile tail or a tentacle, give them a tentacle. Give them 2 while you're at it. Depending on thickness each tentacle might be stronger than their very arms, and elephant trunks have shown us that tentacle-like appendages ending in pincer-like muscular structures are more than possible, they could choose between just grabbing a sword or wrapping the limb around it, and God help anyone trying to predict how a tentacle attacking with a sword will move next. It's true that a tentacle is functionally more fragile, as it has no bones whatsoever to stop a blade and relies almost purely on muscles for structural support, but honestly I'd say it's safer to use a more fragile tentacle with less important nerves inside than it is to use an extension of your spinal cord to fight, because that's what a tail is at the end of the day.

But well oh well, onto tails. The first difference is that in the majority of time, prehensile tails seem to be more focused on movement in a 3d environment before tool manipulation (true, octopuses also use their tentacles to move around, but the same cannot be said about elephants, giraffes and certainly not about male tapirs and their own prehensile "limb"), and in this case the square cube law and the strength of tree branches comes back to haunt us.

In spider monkeys, the creatures I'll be focusing on due to how adapted their tail are, have basically turned their tails into a fifth appendages down to having actual tail prints much like they have fingerprints. They use their tail for more stability when accessing food in more unstable parts of the canopy, as well as to swing around with Dexterity. The tail is also easily capable of sustaining their own weight. The problem? That normally equates to no less than 10 kg. Truth is, muscles work best at smaller sizes. The smaller a creature, the more weight it can usually carry in comparison to its own bodyweight, which is also most likely a reason larger heavier monkeys like chimpanzees lack such tails, as their weight means they can't go swinging around less they risk grabbing hold of a branch too weak to sustain their own weight.

Looking at felines on the other hand, the tail seems to have evolved towards a different purpose, more specifically for balance. Many feline species use their tails as a counterweights rather than as another limb. Cheetahs use them to quickly switch directions, while cats that are more adept to climbing, particularly leopards, use them to counter their momentum and stabilize their climbing motion.

So basically, not only is the cat tail not something that is normally used for grasping, but for balance, we also run into all of the problems that come from using a tail for attack like you wish them to:

1- it needs to be long. The scorpion tail is actually its segmented abdomen, and remember: 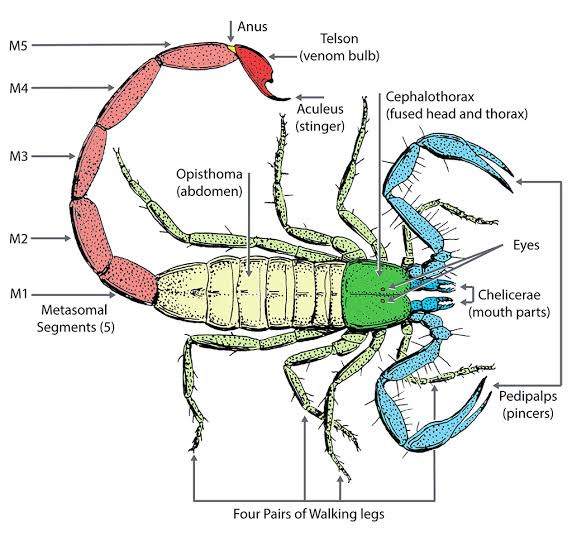 The yellow part is also the scorpion's abdomen

2-another reminder: by weaponizing your tail you're putting the spine at risk. Spinal cord damage is a possibility, especially if someone manages to twist the tail in ways it shouldn't, and in here the flexibility becomes another problem. Most animals that actually used their tails for defense , particularly ankylosaurus, used them as more rigid, mace-like weapons with a flexible base. Apart from the base, the thing was basically a bony rod with a club at the end (stegosaurus seems to be an exception to this, with their tails seemingly having unusually flexible joints, which makes sense since it's defense strategy was stabbing the attacker rather than breaking some of their bones, although I'm no paleontologist). Notice that between the ankylosaurus, the dirpotodon and other mace tail animals, one core similarity was a notable lack of the flexibility necessary for a scorpion like motion or to the dexterous mobility of a prehensile tail.

The only creatures I'm aware of that actually use tail-like structures to attack like scorpions are, well, scorpions. Also: a funny thing about scorpions and their anatomy is the usually correlation between venom potency and pincer size that's: as a rule of thumb, the smaller and weaker the pincers the scorpion has, the more potent the venom tends to be, because scorpions with stronger pincers usually have less trouble dealing with prey with pincers alone, and therefore they don't need venom that's as powerful or fast acting. Scorpions with smaller and weaker pincers however need their prey to stop struggling as quickly as possible, and so comes in the the need to have more powerful venom. Notice however how in all of these cases the scorpion is mostly using the tails for the time needed to stab the prey and deliver the paralyzing venom.

So basically, is it possible to have a strong prehensile tail that's both flexible and strong? Well, a tail has muscles anchored on bones. The stronger you want the prehensile tail to be, the more surface area you need the bones to have, and the higher the size of the bones, the less flexible the tail will be,and the more muscle you'll need, because the mass of the bones also increases faster than the surface area. In addition to all of these problems, we have going against this idea the evolutionary history of feline tail as more balance oriented appendages (a smaller problem, evolution is known for repurposing structures all the time) and the fact that by using the tail as a limb in the way you want, you're basically making a limb that's longer than the other 4,but placed in the opposite direction to where you'd normally need it (the very reason it needs to be long) and that by being more flexible also risks damage, because breaking an arm bone doesn't risk your spinal cord, but breaking a tail vertebrae might.

The one way I'd see it working would be to have a tentacle-like muscular structure over the tail, but at this point you're adding things that normally wouldn't be there, and if you want to add in a tentacle to a tail, you might be better off removing the tail and adding 2 tentacles that just extend from the back and act like a cat tail while they're not being used (Think white spikes from the tomorrow war). It ensures the spinal cord will be safer not being swung around in combat, it can be placed closer to the creature's front, making better use of its length and still allows for that scorpion-esque movement with double the power when compared to a single tail, especially since the base of the tentacle will be closer to the target of the push than a tail base would be.

7
How long and heavy can a tentacle tail get relative to the animal it's on?
1
How could you make a cat's tail prehensile enough to use weapons?

5
How strong would a steam-powered prosthetic arm be?
16
How would a tail affect fighting styles? Or would it have basically no effect?
3
Powerful and strong tail
1
How could you make a cat's tail prehensile enough to use weapons?
11
How much muscle mass would be needed for a genetically modified human to move his ~1 metre long foxtail?
8
Magic: Reality check of effects of mass-altering magic
2
How could be useful a long and flexible tail for a living flying mechanism?
2
How could "muscular hair" work?
6
How to correctly insert a kangaroo like balance and support tail in a humanoid?
7
How long and heavy can a tentacle tail get relative to the animal it's on?