Feasibility of an amateur setting their own broken nose

I am working on a fantasy set in a medieval age (the exact time period is loose due to magic progressing science differently to the real world), and an experienced fistfighter gets their nose broken in a brawl. They would have had their nose broken twice before, and have access to wooden splints of almost any shape (the fighter has the magical capability to manipulate inanimate objects, so could make custom splints).

I want to know the feasibility of

What would be the precedure if they could, and could they do it immediately after the nose was broken?

All your fighter needs is a long smooth tool and the will to stick it up her nose and wiggle it around until she hears that satisfying >pop!< indicating a successful setting of the fractured bone.

The procedure is (unprofessionally) very simple!

Rather like this excellent demonstration! Since the demonstration is modern, the doctor uses analgesics and local anesthetics. Medieval fighter girl might just want to chew on some willow bark and skip to 02:15 for the actual procedure.

Some glue, a bit of cotton padding and a bronze splint for a fortnight should put her back in fighting form, so she can break her nose again!

That tool needs to look a bit like a Boies elevator: 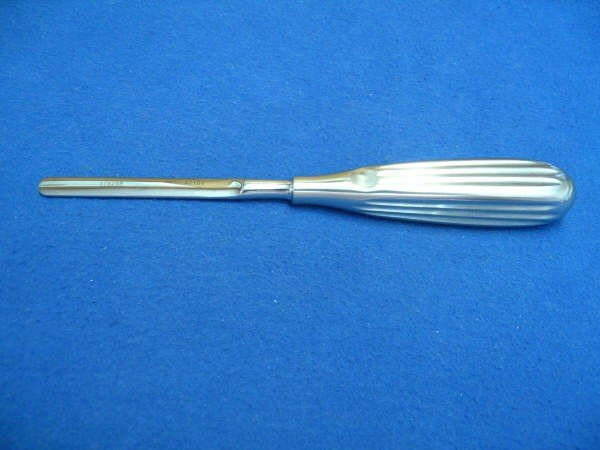 Medieval Sourcebook: Paul of Aegina: Epitome - On The Fracture of the Thigh and Nose

The under part of the nose being cartilaginous does not admit of fracture, but it is liable to be crushed, flattened, and distorted; but the upper part being of a bony substance is sometimes fractured.... When, therefore, the nose is fractured in its under parts, having introduced the index or little finger into the nostril, push the parts outwards to their proper position. When the fracture is of the inner parts this is to be done with the head of a probe immediately, during the course of the first day, or not long afterwards, because the bones of the nose get consolidated about the tenth day. But they are to be put into the proper position with the index-finger and thumb externally. In order to prevent the bones from changing their position, two wedge-like tents, formed of a twisted rag, are to be applied, one to each nostril, even if but one part of the nose be deranged, and these are to be allowed to remain until the bone or cartilage gets consolidated....

If the nose become inflamed we may use some anti-inflammatory application to it, such as that from juices [diachylon], the one from vinegar and oil, and such like; or a cataplasm of fine wheaten flour boiled with manna or gum may be applied, both for the sake of the inflammation and in order to keep the nose in position. When the nose is distorted to either side, Hippocrates directs us, after it has been restored to its proper position, to take a piece of leather of a finger's breadth, and having spread one of its ends with taurocolla or gum, to fasten one extremity of it on that side of the nose to which it inclines, and after it dries to bring the thong by the opposite ear to the occiput and forehead, and to fix the other end of the thong firmly there, so that the nose being drawn sideways may take the proper position in the middle. This practice, however, is not much approved of by the moderns. If the bones of the nose are broken into small pieces we must make an incision or enlarge the wound, and having removed the small bones with a hair forceps, unite the divided parts with sutures, and use the applications for recent wounds and those of an agglutinative nature.

Not the answer you're looking for? Browse other questions tagged humans medieval medicine or ask your own question.

18
Tactical Advantages to Dragons with Riders
6
Alternate History: A European Empire in the Middle Ages - Feasibility
16
How to realistically implement magic-users in medieval warfare?
4
Internment camp for magical beings
6
Feasibility of mute Soldiers on a medieval battlefield
5
Would it be possible for neanderthals to not go extinct, and perhaps build their own nation?
16
Justification for each country having their own form of magic