How can I make my climate zones more realistic? 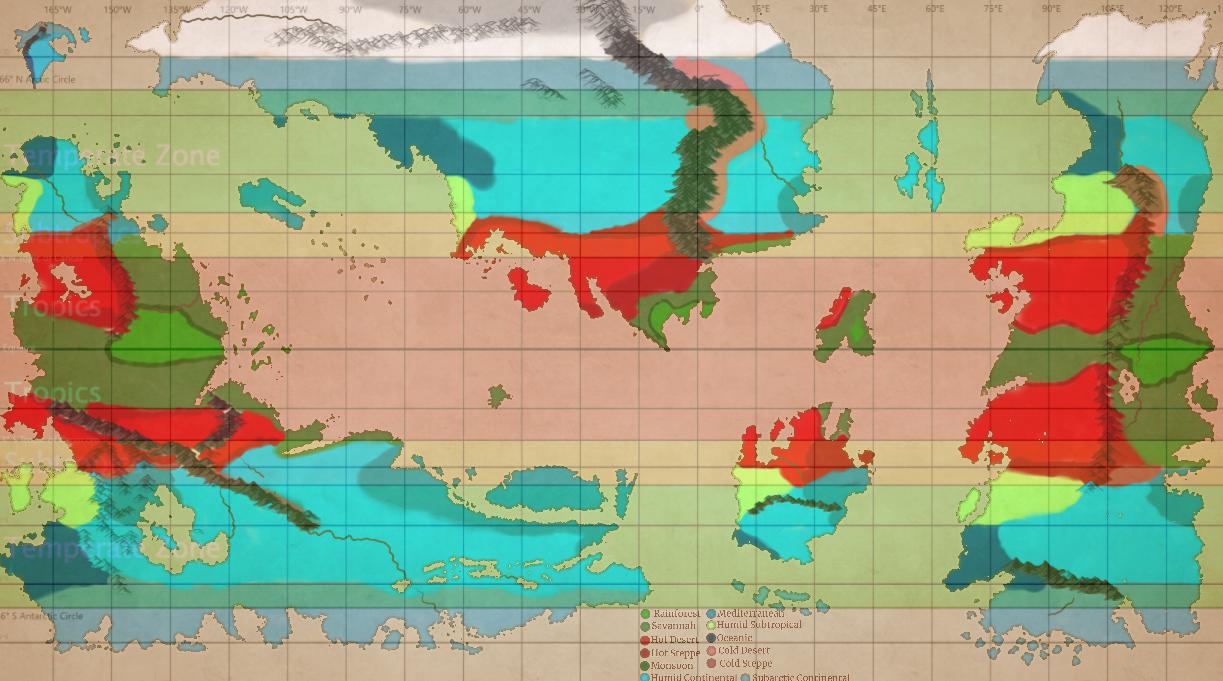 this is about the third iteration I've made so far. It's getting there, but as I pay more attention to climate zones, I find myself more confused or just making more mistakes. I've tried to use video tutorials on Youtube to help, however part of the problem is my own fault- I rushed in and haven't come up with any heightmaps to help me craft the world, besides the mountains on display. What should I do or improve to make these areas more realistic?

EDIT:Thanks to some quick replies,I can help narrow things down a bit. I'm aiming to have a believable amount of realism, with enough room for creative license. Not exactly "soft realism" or high fantasy, but I don't want to go into the level of detail or restrictiveness that hard realism would require.

Considering my copy paste is pretty tiny, the zones (bands) in the overlay represent:

As for the little legend I've got going on, it's as follows:

Do you have an ocean circulation map to go with the biome overlay? The exact details of current flow have huge effects on real world climate compared to what pure atmospheric circulation interactions would tend to suggest. For example large parts of Europe would be frozen dry tundra if it weren't for the Gulf Stream but with it Northern Europe is warm and wet. On the other hand the Humboldt Current keeps coastal Peru much colder and drier than it's tropical location would suggest.

If your world has Earthlike spin then some of the rainshadows look to be reversed but I'm not firing on all cylinders right now so I'll just say be careful that you have you wind patterns the right way around and take Coriolis into account when you work out the wet and dry side of mountain ranges. This effect is huge in my neck of the woods so I tend to harp on about it but Orographic precipitation triples our local rainfall compared to the other side of the divide.

Otherwise you appear to have taken note of the often overlooked maritime climate effects and your climate bands are in the right places. Remember that the smaller and flatter a body of land the farther those effects will reach and truly desert islands only occur where the water is cold and the atmosphere is naturally dry. Isla Guadalupe which is in the suptropical desert band where dry air falls and in the middle of the Humboldt Current so the water doesn't give up any extra moisture that would otherwise support plant growth.

The only other thing to take into account is that forests and wetlands support higher local rainfall through interactions that we have yet to completely unravel. They also slow down water's trip to the ocean so that year-round water courses are often maintained in vegetated areas where the rainfall would suggest a flood/drought cycle.

You will need to take water courses, frost drainage, and solar aspect into account if you want to get into the fine grained local climate effects, what are referred to as micro-climates. These make major differences at the human level, in terms of where farming etc... can and does take place and thus where and what kind of settlements people make.

Not the answer you're looking for? Browse other questions tagged climate currents .

10
Where are the wettest and driest places in this world and why
7
How would a large arctic mountain range affect the weather?
13
Are these climate zones somewhat realistic?
2
Does my climate map work?
3
Are the ocean currents and climate zones of my world plausible?
5
Assigning realistic climate zones
3
Help with Pressure, Winds, Precipitation and Climate Zone
5
Is The Climate Map for My Alternate Earth Accurate?
4
Climates of a Eurasia-like continent in the tropics
2
How accurate was Azgaar.io about what Biomes my Fantasy Map should have (realistically)?