What kind of propulsion system would work in the air and underwater?

I have a futuristic aircraft that's supposed to be submerged under the sea and to lift off again without an issue. The problem is, I don't know of a propulsion system that could work both under water and in air and offer sufficient trust. There's also the issue of transitioning from water to air. I've explored a few options (but I'm no rocket scientist) and I'm a bit stuck on this. Realism is part of the appeal so I'm not going to use sci-fi magic on this. Fortunately the vehicle I'm writing is fairly small, capable of carrying one or two people. (The design of the ship will heavily be affected by the means of propulsion, which is why I don't have much data to offer.)

The options I've explored so far are the following: combustion engines require a lot of oxygen, which is unavailable under water. Propellers would need different designs to work in gas and fluid. A pump-jet would work in water but maybe not in air. Ion-thrusters don't work under water.

I'd reward an inventive solution to my engineering problem :)

It is the same principle used in a railgun, but instead of one projectile you continuously shoot the medium you are in. It is contingent on a conductive medium. That means seawater for water, and ionization in the air. These are real, and working models have been built since the 1960s. 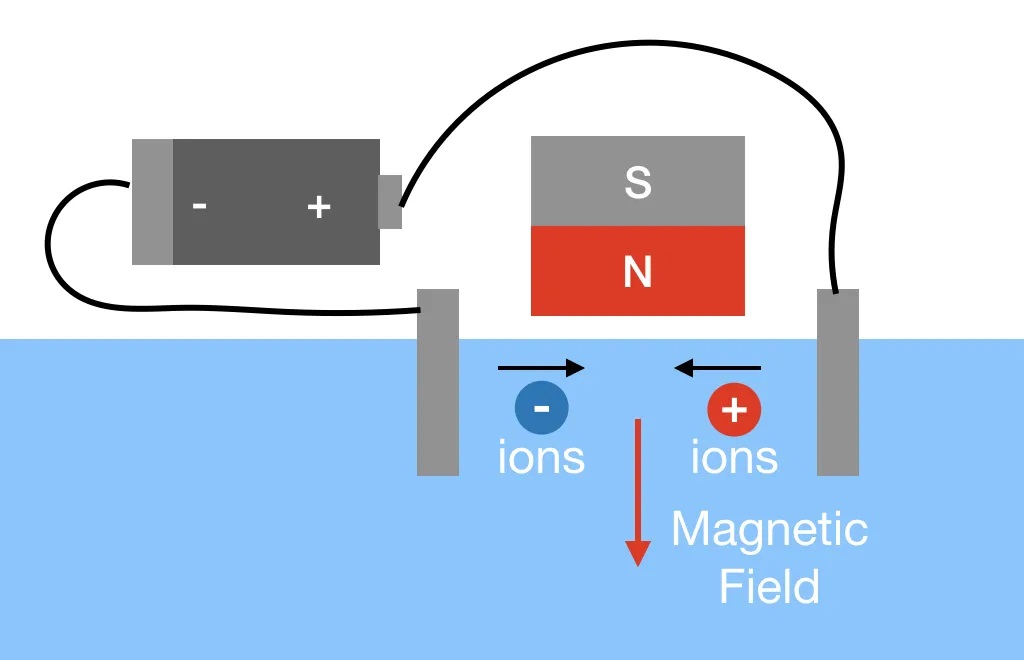 The working principle involves the acceleration of an electrically conductive fluid (which can be a liquid or an ionized gas called a plasma) by the Lorentz force, resulting from the cross product of an electric current (motion of charge carriers accelerated by an electric field applied between two electrodes) with a perpendicular magnetic field. The Lorentz force accelerates all charged particles (positive and negative species) in the same direction whatever their sign, and the whole fluid is dragged through collisions. As a reaction, the vehicle is put in motion in the opposite direction.

An additional cool thing: air, water, and also space. You could easily use magnetohydrodynamic propulsion as an ion drive if you have something with that you can ionize into plasma and then shoot out the back.

Additional additional cool thing: your engine can easily become a generator. If the conductive medium is flowing through on its own it will run the process backwards and charge your battery - the same principle as induction brakes. This would be fine to use on re-entry to slow your vehicle and convert its speed into energy for later use.

Cherry on top: the part of the story where the characters convert the drive on their ship to a railgun.

Submarine launched missiles have been around since the 1960s. They travel through water from the (submerged) launching sub until they reach air, and then act as normal surface to surface missiles over long distances. If your rocket engines are refuelable, they will be a workable duel environment propulsion system for your needs.

There are two common methods of airplane propulsion: propellers and jets.

These both work in water too. Propellers are far more common in water, but there are water jets too, commonly used in those loud jetskis everybody hates.

Not the answer you're looking for? Browse other questions tagged hard-science near-future aircraft shipbuilding or ask your own question.

18
Could edible fish live in a large water tank used as a radiation shield on a spacecraft?
5
Airborne Hotels - Stabilizing and steering a Cloud Nine tensegrity sphere
7
Small-scale aviation without fossil fuels
5
Tech required for low-flying/hover vehicle
2
What kind of star will work for my system?
20
What kind of ships would an amphibious species build?
10
Medieval fantasy ship carrier
15
Decelerating a relativistic, beam-powered starship at its destination without pre-established power-beaming infrastructure at said destination