Yes, I know the answer for this is "no, that's unrealistic and ridiculous," but magic in my world may just change that. You see, mermaids have the (super)natural ability to create and manipulate seashells (and pearls, but that's outside the scope of this question).

Now, I've decided that mermaids will use seashells as clothing (specifically seashell tops, but other seashell attire will exist too) in my setting, both for modesty and practical reasons (explained below), but that made me wonder. Could seashells even work as clothing?

I mean, realistically, there are only three justifications for seashell tops:

However, just because I came up with three reasons to justify seashell tops (or seashell clothing in general) doesn't mean they're actually viable. Perhaps they just can't be made comfortable enough, or maybe seashells have some irredeemable flaw that would prevent them being used in this way. So my question is, Are Seashell Tops Viable Clothing For Mermaids? 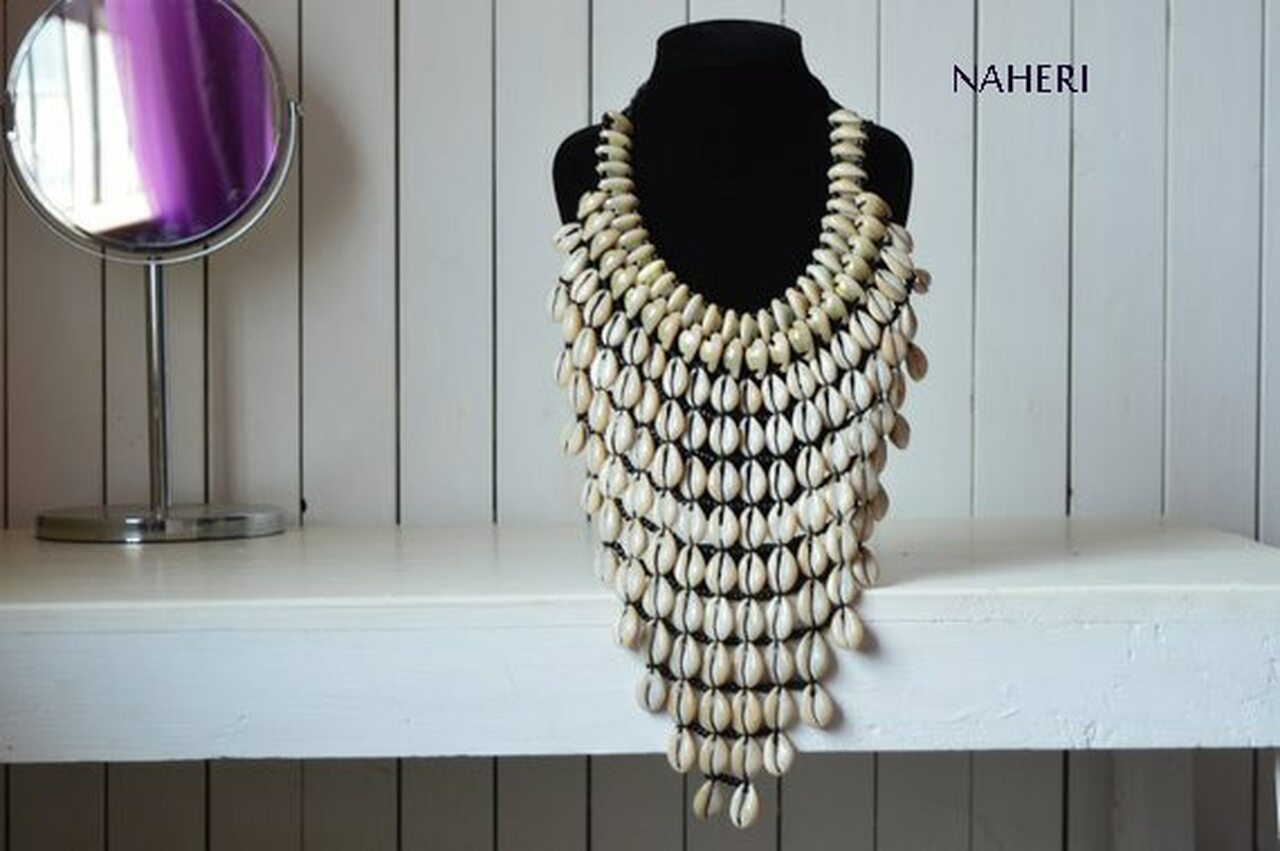 This top (really a necklace) is eminently practical for a mermaid. Shells are available. Cowrie shells are smooth, waterproof, durable and common. Varying sizes can be used to provide more or less coverage for the front as desired. They are heavy enough not to float up when she is in the water; a larger necklace could wrap around and tie in back at the midriff and so secure it against the body when she swims. A top like this could be made more extensive to provide protection from the sun.

Plus it is a sweet and exotic look. Project Runway here I come!

Seashells are rigid. Totally rigid clothes on a moving body are very likely to cause blisters and bruises due to friction.

Prolongued friction might even cause ulcers. If you have ever worn boots which were not broken in for long hikes you will get something like that.

If the shell covers only the breast is not offering that much protection.

If it covers the whole chest it hampers movement and all what I have written above.

To everyone saying that seashells are a no go because they are hard, remember that coconut bras are a thing in the real world. Mermaids would surely use some sort of padding to protect their voice producing organs.

That said, who's to say that those bras are made of actual sea shells? They could be made to look like shells because that's underwater folk culture. Same reason why people cheering for some sports team in North America use hats with moose antlers, which are not actual moose antlers.

It would be cruel, and then you would be left with hard shells and straps. Have you ever seen a mermaid with straps?

There are more fundamental reasons: mermaids do appear to be mammals. Marine mammals have no trouble nursing young in the ocean, but mermaids might like to do better than nature. Maybe it started out for protection, to soothe baby-nibbled surfaces sensitive to sea water.

Introducing a little magic to the breeding of pets, it should be easy enough to come up with a flattened gastropod or a one-shelled clam, bred to use its muscular foot and antimicrobial, healing secretions to conform closely to a soft substrate of varying shape. More importantly, these can be bred to accumulate milk in a sanitary internal sac, and to allow it to be sucked out through a separate small orifice in its shell by a determined infant. Filling several such shells with milk in advance allows the mother to prepare for a period of separation.

The invention of this mollusc-pumping magic helped mermaids take part in longer marathon swims and elaborate festivities where the presence of infants might be an encumbrance. Now they leave them behind in communal babysitting creches for days at a time. Some may argue that this is not truly an altogether good thing, but natural sensibilities rarely stand up to convenience and obligation.

Not the answer you're looking for? Browse other questions tagged magic clothing mermaid or ask your own question.

12
How could mermaids talk with gills?
9
Could mermaids feasibly make clothing out of natural rubber?
3
What headwear could a triton wear?

1
Clothing requirements for people with enhanced speed
9
Could mermaids feasibly make clothing out of natural rubber?
6
Surface Clothing for Merfolk
5
Clothing for Fossorial People
0
Balancing Eggshell Tops
11
What Benefits Could Tongue-eating Lice Have For Mermaids
3
Mermaids: Dealing With Predators
3
Role of Mermaids in Medieval Fantasy Society