space - Is there a minimum safe distance to watch a supernova?

Consider that humans now have technology to travel around the galaxy at will.

Hyperspace, warp speed you name it.

There is a distance in which they can watch a supernova as a form of entertainment AND not be harmed in the process? As we do with the sunrise (in terms of experience). It can be from a planet in another system or a ship.

Edit: consider a special kind of glass-like material capable of filter some radiation. But not all of it. The risk is the same as we taking a sunbath without sunscreen.

The actual explosion of a supernova isn't really all that much "entertainment." It's an extremely bright flash. The formation of the nebula might be interesting. But that is a much longer process, starting at months and upwards to 100s of years. And, if you are far enough away as not to be fried by the initial flash, you will need very good telescopes to see the nebula expanding.

So the supernova that produced the crab nebula was observed on Earth in the year 1054. Now, through some very good telescopes, it looks like the following. 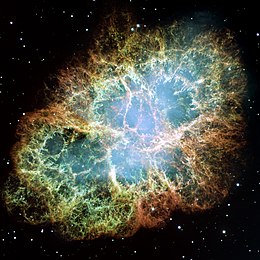 It would be pretty interesting to be able to watch that form. The problem is, it took 1000 years to get to that stage. Your audience would need to be quite extremely patient.

But they have hyperspace you say? OK. There is not a single distance to watch from. What you do is arrange to start at a very long distance from the explosion. In this case, about 1000 light years. Then, on observing the initial explosion, you start moving towards it in hyperspace. The idea is, you stop and observe for a short time. Then move closer, stop and observe, move closer, etc. What you wind up with is a "movie." You start with the initial flash, then the "firework" expands out as you move closer. Because hyperspace is faster than light, you adjust things so that over about 30 seconds ship-time (or 4 hours to allow a nice dinner and drinks), you move that 1000 light years closer. That means the apparent expansion takes 30 seconds, because you are travelling "upstream" of the light.

Now, if you add a glassy shield, it would depend upon how effective this shield is. Blocking 75% of radiation means only 1 part in 4 harmful radiation gets past your shield - this would allow you to be twice as close since the radiation falls off proportional to distance squared.

If you had a 100% effective shield against ionizing EM radiation, you still have limits unless you could shield against neutrinos since they easily pass through planets and stars and presumably your shield - and there are a massive number of neutrinos in a supernova. So much so, that even though interactions between a neutrino and your body is very rare, you can be killed with a few A.U. of a supernova from neutrinos alone.

Not the answer you're looking for? Browse other questions tagged science-fiction space space-travel .

6
Can this version of the Alderson Drive be used to violate causality?
57
FTL travel is impossible. How is interstellar trade possible?
15
What would we see of a devastating interstellar war between alien civilizations within 1000 Ly?
4
How to retrieve cultural artifacts from a world under siege?
14
Navigating storm fronts in space
0
Can someone with a better understanding of physics review or correct my design of a hypothetical fusion reactor for space vessels?
10
Proper combat distance scaling for a sci-fi space opera tabletop setting
6
Interstellar Space Near Future Betelguese Supernova
13
'Speed Bumps' as a Lethal Trap in Space Ship Combat
3
Minimum Safe Distance From Planet-Destroying Event