How Can a Creature With Knockback Come to Exist?

Background: Alendyias is a world that was formed inside the Fracture of Reality, one that is still forming as the Fracture in Reality grows and absorbs other worlds in its path. Absorbed worlds and all life in and on them are saturated with Chaos Energy, which in many cases turns ordinary creatures into monsters like trolls (formerly large apes) and goblins (monkeys).

Chaos energy and magic go hand in hand (are practically synonymous), so various creatures have turned the Chaos Energy infusing them into something we call Enchantments, a magical effect they hold during life and grant to whatever kills them upon death. (The link explains how this works for one specific monster, a slime-type creature called a Plop.) Enchantments are not just imposed by the Fracture, they are reflections of a creature's innate nature. If a creature evolves in such a way as to develop a new nature, it will develop a new Enchantment as well.

The trouble is, I need a creature with the Knockback enchantment, as this is a very useful Enchantment. Knockback is (sort of) simple; items and creatures with Knockback absorb kinetic force when struck and put it into their pushback. In clearer terms, due to Newton's Third Law, all matter pushes back with equal and opposite force when pushed upon. All Knockback does is redirect the force acting upon it into the force it is putting out, essentially doubling an item's kinetic output to push the offender away.

Enchantments are based upon a creature's nature and/or physiology, so a creature with Knockback would need:

Why am I asking this? Well, I could just handwave this thing's existence, but all of my other creatures have a logical basis, so this Knockback monster needs one as well. Thus, my question is How Can a Creature With Knockback Come To Exist?

Going on a different tangent, how about something like a yak?

From a physical standpoint, horns to attack with coupled by a dense fur that normally keeps them warm could work as a base.

The lack of springiness inherent in the animal could be solved by the chaos energy making their fur elastic/springy enough to be capable of absorbing the kinetic impact of blows, thus fulfilling the qualification in a different way. The energy absorbed by this fur is then turned into a devastating counterattack from their horns. There is a balance to be struck between springy and insulating fur that might alter their habitat a bit.

As herd animals of the cattle variety they are not known to be aggressive in our world outside of mating season. That should be fine -- they don't use their Knockback enchantment for offensive purposes anyways. These animals can be aggressive if provoked, they are just difficult to provoke normally.

As a plausible reason to develop this skill, their range of territory is smaller in this world and has less places to run compared to the world they originated from. Alternatively, their predators on Alendyias are smarter and cut off main avenues of escape in an attempt to corner them -- possibly through their own abilities. Regardless, they have been pressured to develop a way to weather attacks from predators and discourage them from attacking. Knockback would work nicely for this -- the springy insulating fur absorbs the force of impact and prevents the predator from injuring the animal, and the additional force makes their counterattack that much more dangerous to the predator trying to eat them.

No, it doesn't have to be a Kangaroo specifically, but kangaroos store and conserve large amounts of the energy they use while hopping and use it in their next jump. They certainly are known for kicking and using this energy to repel things trying to harm them. so if you want an animal that stores and redirects kinetic energy, that's a good one.

If something like that doesn't work for you, the jumping of frogs is based on storing and releasing elastic energy. Without storage, frogs would just be awkward walkers. 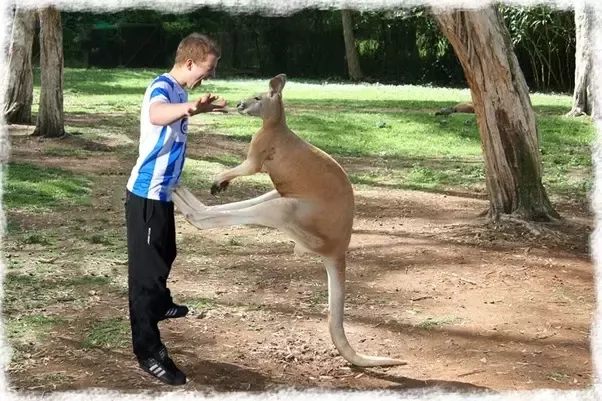 Rhinos? Naturally aggressive to anything in their territory that is considered a threat. They've been known to attack vehicles driving on roads through their habitat. Their tough hide could be considered springy maybe?

Another option would be a Hippo. Same comments as the above, but you could add an additional enchantment property due to the reddish oily sweat that they excrete to keep their hide hydrated. Maybe the secretion could be changed through Chaos to provide the knockback effect.

I'm not sure about their springiness and elasticity but i guess their bodies are also kind of springy as they can jump around and butt heads. 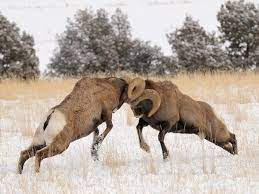 How about something like a darumaka/punching bag. you knock it down, it knocks you down. In practice like reflection.

Not the answer you're looking for? Browse other questions tagged science-based biology magic mythical-creatures .

25
How Can I Protect Medieval Villages From Plops?
6
How Can a Creature With Focus Come to Exist?

11
Preventing Dead Monsters From Spawning Undead
8
What Weapons Would Benefit From the Rubberizing Enchantment?
1
Making Stone Walls Feasible Against Monsters
0
Making a Predator For Bitbugs
6
How Can a Creature With Focus Come to Exist?
2
Benefits of the Strengthen Enchantment
5
Explaining Dragons
0
Effects of Remnants on Monsters
0
Impact of Chaos Sense
7
Determining Predator/Prey Relationship for Plop and Chompers