Biology of a creature that could instantly gain weight at will?

Certain creatures, like geckos with their detachable tails, are known to reduce weight at a moment's notice in response to attack from a predator.

When I considered the opposite phenomenon⁠—increasing weight suddenly and at will⁠, perhaps for stability or a combat advantage—I immediately dismissed it impossible due to the conservation of mass, but then I realized that weight != mass, and perhaps some trickery involving buoyancy in the air or the water would be possible. Maybe certain Earth creatures that I'm unaware of already do this.

What could be some theoretical biological mechanisms that might achieve this, whether instantly reversible (e.g. metabolically mediated gaseous phase changes) or needing time to recharge (e.g. gaseous production and release)?

To change your effective weight in Earth gravity and atmosphere, you need to add or reduce lift force. Mechanical lift is easiest to achieve, so the most realistic answer to your question is: birds! They "gain weight" when they land.

For other kinds of lift you can design different kinds of animals, all of whom are very much fictional and less than practical.

For thinking up forces to overcome gravity, the sky is the limit!

This is entirely possible for an aquatic or partially aquatic creature, by the simple expedient of ingesting a large volume of water, and is readily reversible by ejecting the ingested water.

In fact, puffer-fish rely upon this mechanism to inflate their bodies and erect their defensive spines.

Squids and octopi also rely upon this mechanism as a source of reaction mass for their 'jet' propulsion.

So, this is not an outlandish idea at all, nor is it a new one.

We can extend this concept to terrestrial creatures with a ready access to water, which may be able to ingest and store large amounts of water for whatever purpose they may evolve to fulfil. This could certainly include gaining mass in order to increase their stability in something like wrestling for dominance.

A terrestrial creature might be able to gain a mass equal to its normal body mass, or more, depending on its size - smaller animals being more able to carry extra mass due to the workings of the square-cube law.

If you compress gas, its density increases and effectively increases the weight of a vessel containing it. For example, a filled scuba tank can weigh several pounds more than an empty one.

So in terms of an organism, what you need is an organ for storing air (kind of like an air bladder in fish) with two properties:

In addition to existing answers that mention venting swim bladders and compressing air to reduce buoyancy:

The spoiler on a racecar is designed for exactly the purpose you describe - the downward force of air hitting it it increases the apparent weight of the vehicle, increasing the amount of friction between the tires and the road, and allowing the car to take corners faster or more tightly. Since it only increases apparent but not actual weight, it has a benefit of providing more friction without requiring a larger force to accelerate more mass.

I'm imagining an animal with some kind of natural spoiler on its back that can be adjusted to produce a down force in high winds. These animals would naturally live in windy environments, perhaps on coastal cliffs or on mountaintops. As the wind picks up, the animals use the down force from their spoilers to increase their apparent weight, allowing greater friction with the ground and improved stability. By adjusting the angle of attack, the amount of down force and apparent weight can be varied very rapidly. A spoiler is very much like an upside-down wing - instead of providing positive lift to counteract gravity, it provides negative lift to push things into the ground even harder.

Another option is "hiving": several creatures can emerge into a bigger thing (via glue-like skin coverage that is exposed as a reaction on dangerous situations). That naturally leads us to a condition the creatures are not lone wolfs and live by colonies/communities like sea gulls etc. 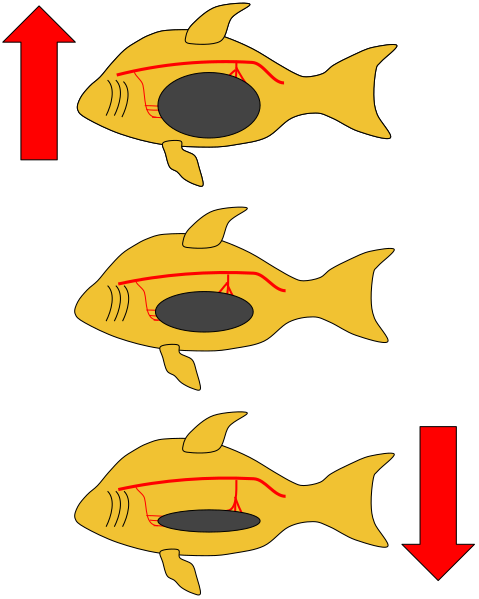 Many bony fish have swim bladders. These are gas-filled internal organs that help the fish maintain neutral buoyancy and rotational stability, so that they do not have to expend energy maintaining a constant depth or staying upright. The bladders are designed to extract gases from the bloodstream, which are in turn extracted from the water via the gills. In some species, the fish can also "gulp" air from the atmosphere to help fill their swim bladders.

One could imagine a species that has evolved to be able to "vent" its swim bladder at will, leading to a sudden decrease in buoyancy and a corresponding increase in apparent weight. Imagining a way that a species could suddenly increase its buoyancy is trickier, but perhaps one could handwave an ultra-efficient gas-extraction mechanism in a particular species's swim bladder.

Absorb mass by sucking in:

In a sand desert environment you could imagine an animal that sucks sand into a body cavity / 'sand bladder' This was already suggested by another answer. (Dry) sand has the advantage, that it can quickly be sucked up.

Any oxydation, that doesn't expel exhaust gases will gain you mass

If the creature could store considerable amounts of hydrogen (perhaps chemically bound) it could burn this hydrogen into water (steam if not being cooled down quickly) If that water is kept the creatures mass would increase. (Two H2 molecules can bind one O2 molecule) It would be that oxygen, from the air that is bound and attributing to the mass.

This would mean, that a lot of gas surrounding the creature would disappear quickly, resulting in a bang, or an whirlwind or similiar.

Generally speaking if a creature can provoke a chemical reaction that absorbs molecules from the air Oxygen is the one, that springs first into mind, but perhaps Nitrogen could also be absorbed especially with the energy produced by transforming H2 and O2 into water, then the mass could be increased.

Problem is of course how to not burn die / because of overheating. You had to find chemical reactions, that are not too exothermic or that are compensated by parallel endothermic reactions, that don't release mass. The tricky parts are probably:

In fact any oxydation, that does not expell exhaust gases like CO2 or CO will gain mass.

Your creature appears to be composed of mundane atomic/molecular matter. However, swimming around him are thousands or even millions of tons of exotic, weakly-interacting particles.

When necessary, these particles can be caused to decay back into the regular sort of matter, and it results in an apparent (but not true) gain of mass. This process is reversible, and the extra mass can be converted back to weakly-interacting particles.

The one caveat here is that sensitive scientific instruments might be able to detect the WIMPs via gravitation... they're invisible, but still there and weigh quite a bit.

Basically, he can fart out the dark matter, but the stink lingers.

Fugu fish can consume water and air quickly to become much bigger. During inflation process, fugu consumes water, and her mass gradually increases. Mainly because mass of water she consumed is added to her own mass.

This is video showing fugu inflating to protect herself from fisherman https://www.youtube.com/watch?v=L8-IFdxXW4w

This mechanism could be defined as the abrupt growth of bone cells in response to outside stimuli which would explain the gaining of mass. (Osteo - bone, genic - growth).

You could manipulate the wording to dictate that the creature have control over it (Instead of "Spontaneous" maybe use "Controlled" or "Dynamic").

Changing the type of cell created by using a different medical terminology prefix (instead of "Osteo-" for bone, you could use "Hemo-" for blood, "Myo-" for muscle, "Neuro-" for neuron, etc) could work too.

A downside of the ability would be that it could be detectible through heat signature. The cell division (mitosis) uses energy and with it being a spontaneous reaction may cause the immediate area to heat up which would make the creature detectable via the infrared spectrum.

Another downside would be that it the creature would have to consume a lot of mass (maybe by eating or assimilating organic matter in some type of absorption) in order to fuel this ability.

They can have jaws big enough to promptly consume a dozen of surrounding turf and elastic belly (like deep-water fishes) to accommodate it. Then, just eject the turf back if it's not required anymore. So, the idea is close to gators eating stones to adjust their weight/volume ratio.

To be more realistic, that creatures may habit only places where the turf is soft enough for quick-swallowing actions (or rocks are small enough to fit into mouth etc). In addition, ejected turf may be poisoned by the creature's inner fluids so aggressors would take secondary damage from that.

While it is hard to gain weight, your creature could have something like momentum wheels ready to accelerate to high velocities.

Momentum wheels rotating at high speed make the creature more resistant against angular momentum against its axis, which gives the benefit of better stabilization.

A crude example of this effect is seen with bikes, at higher speeds they are more resistant against angular momentum and fall down slower, giving you more time to correct those movements. They

At the moment, no creature on earth evolved with this ability, the closest we got are flies which only uses a dual function gyroscope for quick midair maneuvers

I am assuming a terrestial creature rather than one in water.

The creature would either use compressed air, but that is a lengthy task, or it could simply have the stomach to eat whatever is nearby. Scoop up all the sand nearby and you just gained weight. Swallow some rocks, a heavy plant etc.

Another option is to use claws to dig into something like a tree and let the force needed to get you off your spot work in your favor. Even grabbing on to some stubborn plant life can add several kilo's of effective force needed to lift them.

Not the answer you're looking for? Browse other questions tagged biology physics fauna .

11
How soon will tinkering with biology be as simple as programming is now?
3
Would enabling a human to chew his cud make him lose weight or gain weight?
9
Could a creature like the brethren moons exist in reality?
2
Which of these changes to physics will have the least effect on earth’s biology?
1
Feasibility of a creature that can affect biology
14
Could a fungus fuse itself to a living creature and how could the creature pass this on?
1
Making a Predator For Wild Anklebiters
3
What benefits could a creature gain by developing claws on its digits?