how might look and be used the firearm hand weapon for four-handed humanoids?

i mean, our firearms, in many ways, are depend on this fact - that we only have 2 hands. What would the weapon look like, its ergonomics and its qualities and properties and usage - if the use of 4 hands were envisaged? I'm more interested in firearms, not a melee weapon ...

1.How might look and be used the firearm hand weapon for four-handed humanoids ?

The question may sound like this too: what are the unexplored possibilities of designing and using arm weapon (or expanding its capabilities) - if we had 4 arms?

the image of the race : https://gamedev.ru/files/images/peleng_wip_18x.jpg

only and exceptionally for example only(!)- for any such 4-handed weapon: I can imagine firearms in which, for example, the muzzle rotates to 180 degrees for aiming without turning the body : 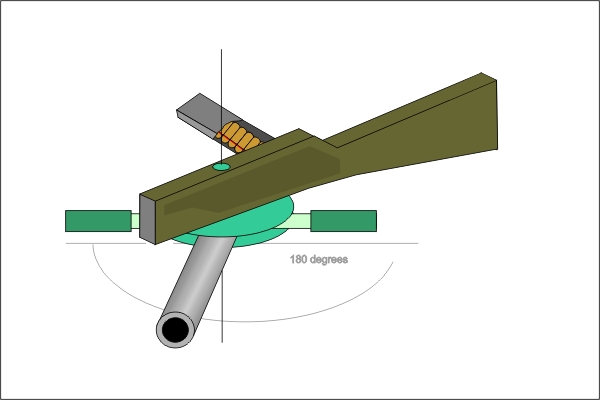 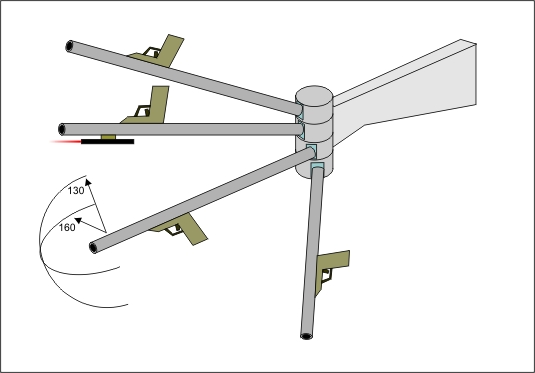 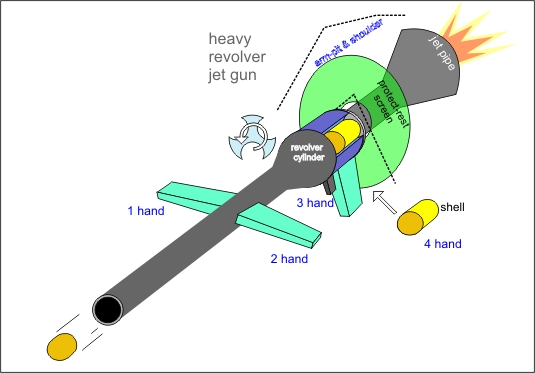 Here is the full range of weapons that your 4 armed friends would reasonably have: 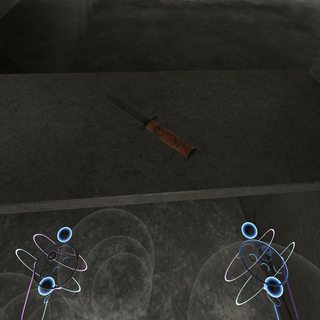 Better than your hands, but not by much. Easy to make, use and conceal. If each arm is less strong then lighter weapons for each hand might be better.

You will be able to have one handed, two handed, three handed, and four handed swords. Since each individual hand is less powerful, you are likely to not have swords much bigger than our swords. However, the hilts will be larger. 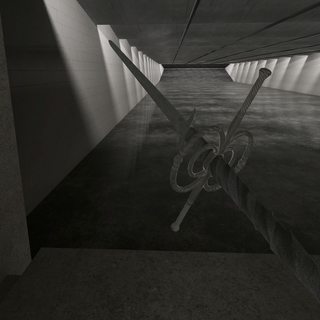 Shields again will be used like normal in most cases. As I will show later, the shield might be modified to also handle simultaneous use of long arms in addition to pistols. However, pre guns shields will be bigger since the two handed sword can get around the shield better. 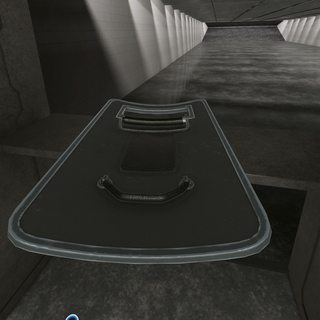 SWAT members might also use the load out below to get the most "tactical" load out. Shield, long arm and pistol. Shield for defense, long arm for long range attacks, pistol for reloading and close up attacks. 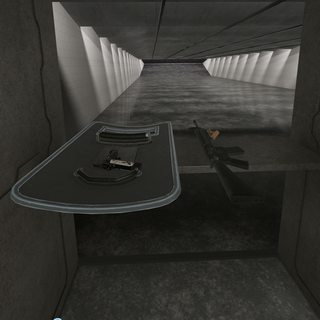 If your creatures are less strong in each individual arm, their pistols will be weaker. While crazy things like Dessert Eagles might not be possible, nearly any other small arm would be reasonable. Revolvers and other weapons would also make sense. These weapons exist because they are easy to make, easy to smuggle, concealable, and good for hunting or self defense. 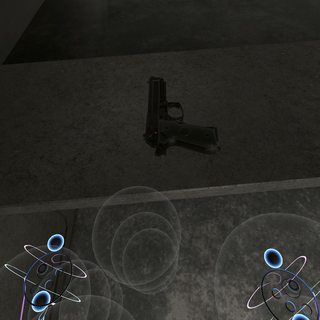 Since two handed weapons don't have to be fired with a left and a right hand, there will be an opportunity to fire weapons with only one side of the body. This will let the user either carry a shield on one side or expose even less of their body when going around a corner. In the case of shield this means that your gun grip will have either a normal grip or a fixed canted grip to the user's dominant side, as seen below. In the case of the less exposure on corners, your grip will have a lock that can be adjusted on the fly to let the user go either left or right around a corner. These grips already exist in real life, but are uncommon, in your universe they will be very common.

Each of the examples below has a straight grip, and then the canted grip. 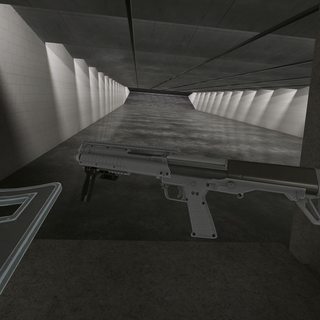 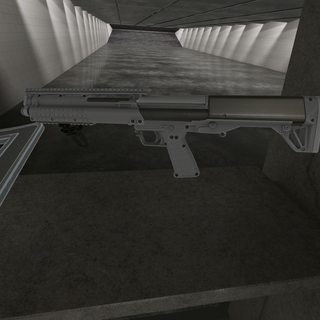 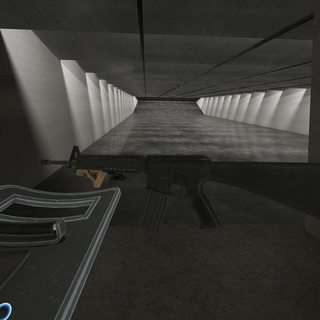 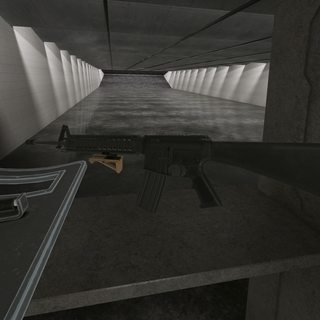 For long range rifles, bipods will be more stable than hands, so there will be no change. For bolt action rifles meant to be used in a standing position either extra grips or people will just grip in the appropriate positions. because Rifles are longer on average there will be plenty of space to grab the weapon. Bolt action rifles will be very common and well used by these aliens since they can keep one hand on the bolt while aiming and work it with out taking their hands off their gun. 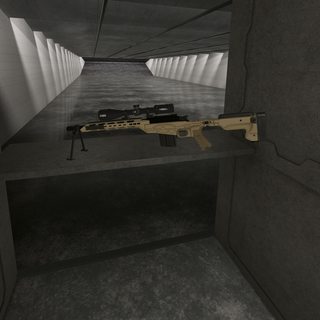 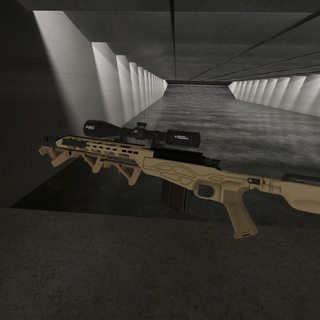 Since shotguns are not accurate and rely on the shoulder to absorb recoil, shot guns will remain mostly unchanged if they are meant for all four hands. 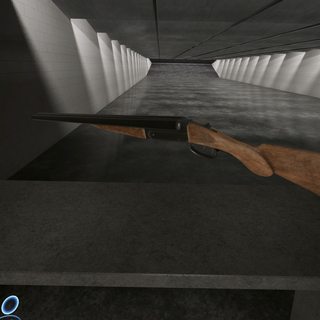 Anti tank weapons, large machine guns, grenade launchers, and mines will remain unchanged. These don't depend on the number of arms, but more arms can stabilize the weapon, or can brace themselves with two hands while firing. 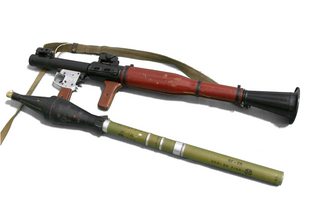 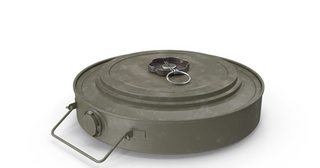 The one really cool weapon that could be done is under barrel weapons, or other combination weapons. These are smaller weapons attached to larger weapons, these would be under barrel shotguns, or grenade launchers. Normally these are sub par because you can't reload your second weapon while you have two hands on your weapon, meaning you might as well put down your first weapon while reloading. but since you have four hands you can afford to use two hands to reload your second weapon, as you hold your first weapon. 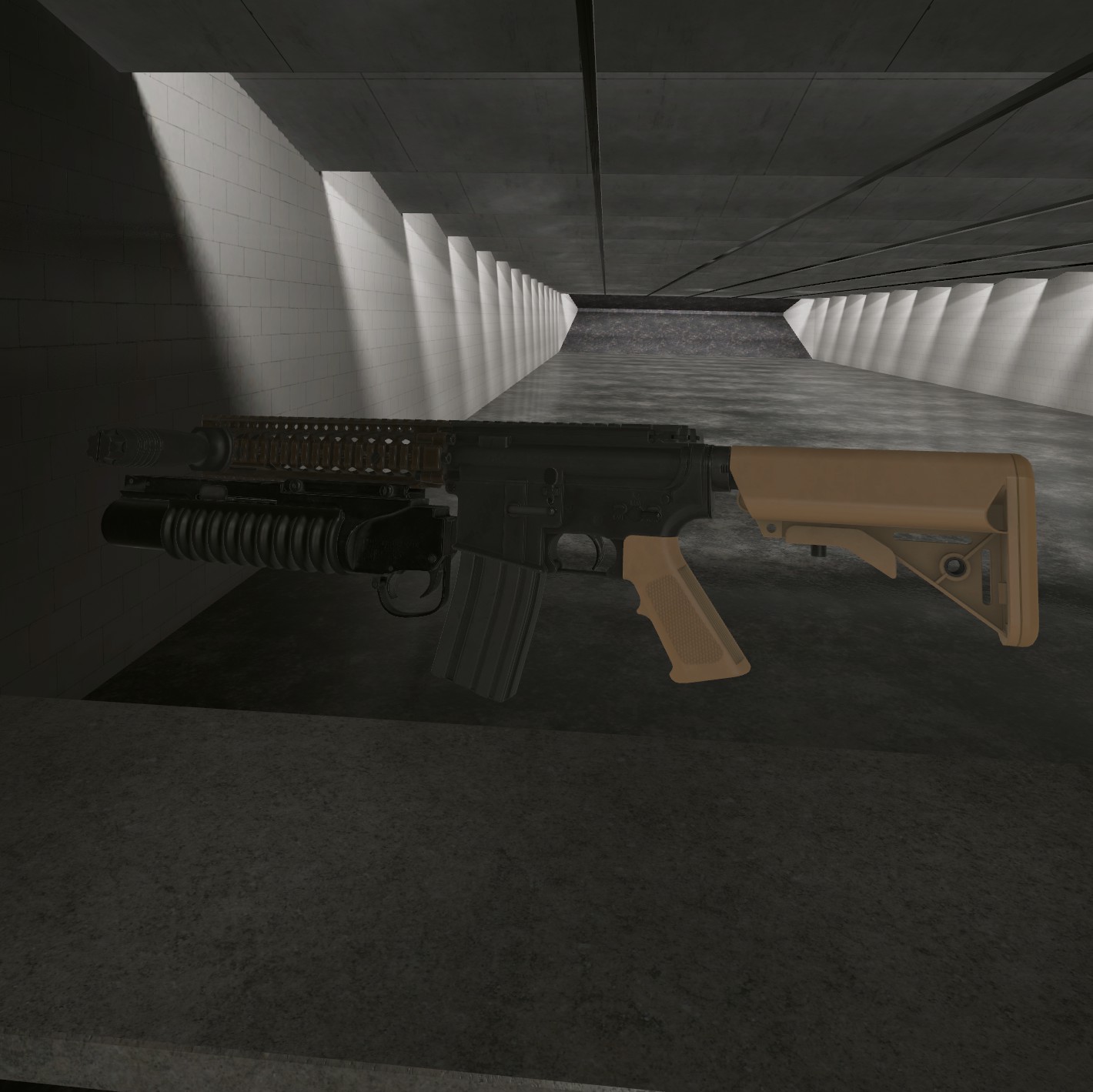 Since you can reload a weapon with two hands while you hold another with two hands this means you can shoot two guns. Not at the same time, but as you get close to running out of one gun you pick up another and aim that while reloading the first gun. 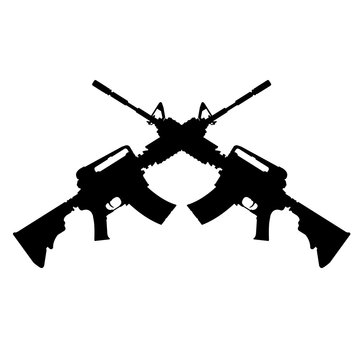 The weapon you have described bears resemblance to a corner shot weapon. This isn't necessarily a two handed weapon, or a more than two handed weapon, but having two hands to steady, one to pull the trigger, and one to aim would help. This takes your ability to turn corners better than other species to a whole new level since you now don't even need to be around a corner to shoot them. 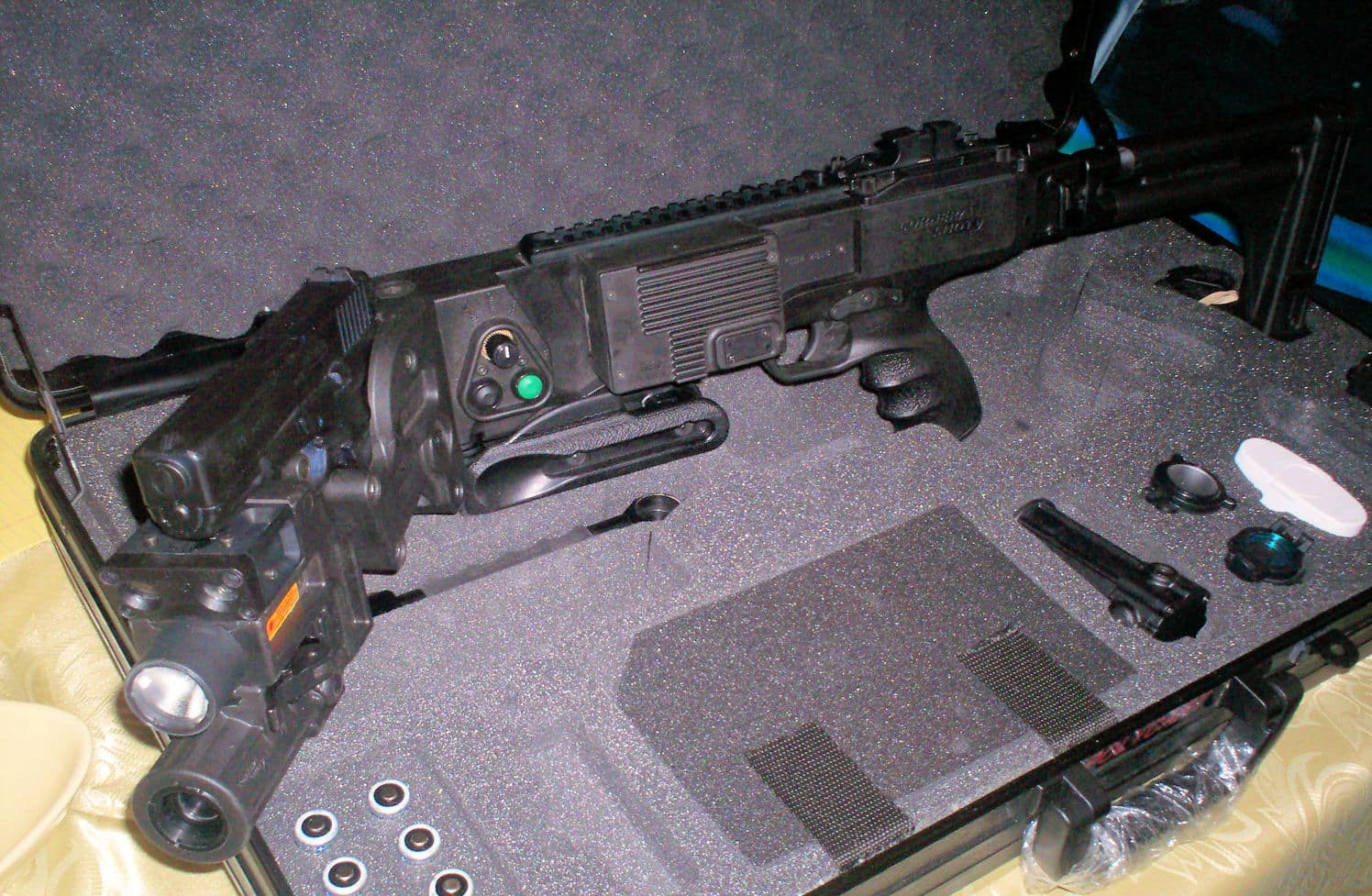 I’d imagine a lot of firearms wouldn’t change much. There’s no need to make a gun more complicated just because you have more arms. For example, a pump shotgun would probably work the same way, as the process of loading the shells and pumping the shotgun (as well as pulling the trigger) can be done easily with two hands. I would honestly think if I was going to war with four hands, I’d still carry a rifle I could fire with two. Maybe I could carry two of those rifles with double the hands, or use my extra hands to carry some sort of shield or grenade launcher or something. One modification I could think of for high-powered firearms (sniper rifles for example) is extra handles or grips so I could use my extra arms to keep the weapon steady as I fire it. In fact, maybe four-armed weapons could include much more powerful rifles, as you have extra arms to control the recoil (assuming each arm is similar strength to an arm on a normal human).

At the end of the day, you could just carry four pistols.

The main difference that I envision when it comes to firearms built for four hands instead of two is nothing to do with modern firearms. Four arms may or may not be able to greater recoil, four hands might speed up clip exchanges slightly, and four arms may or may not give greater stability for aiming etc... but while modern semi and fully automatic weapons for a four armed creature may change in layout, mainly to include more handgrips etc... they will change very little in mechanical operation. So any modern firearm, designed to be operated with two hands, is going to be substantially similar to it's "four hands" equivalent.

What would have changed drastically was the efficiency and rate of fire of earlier firearms, most particularly early breech-loading firearms had a far higher rate of fire with four, or more, hands to run through the loading process. In the time of flint- and match-lock firearms it was common to have two, or even three, dedicated loaders rotating three, or four, rifles for a single sharpshooter. Multiple people formed crews to handled cannons, carronades, and large blunderbusses to accelerate loading and firing. With four arms, assuming a human level of co-ordination between them, you could halve the number of loaders and get the same effect on rate of fire, to a point. This effect becomes more marked the smaller the weapon in question, cannons require a set of sequential steps that cannot be reordered and each step requires quite a lot of movement around the cannon so has to be handled separately. When loading a rifle or pistol on the other hand one pair of hands can attend to the pan and flint while the other rams home the powder and shot halving loading time. The larger guns and smaller cannons are somewhere in between.

The characteristics of your species' firearms will be, indeed, a consequence of the 4 arms.

Please note for the answer the following hypothesis:

First question is: what are the possibilities with 4 weapons compared to 2 weapons existing firearms?

So how would the weapon look like? Given those usecases, I think that compared to our current weapon, such a weapon would have at least:

Mount a gun on your gun!

There are under-barrel weapons there are weapons that can bend around corners the only thing preventing us from combining the two is an insufficient number of arms to aim both barrels independently. This arrangement is more than the sum of its parts because you can aim at two different targets at the same time (which you can't do with a normal under-barrel or corner shot) on top of a potential combination gun (one barrel is rifled the other is smoothbore) and shooting around corners (which is something you can't do with dual-wielding). Another benefit over going guns akimbo is the whole set can be held in one hand allowing the other arms to be used for other tasks like reloading both cartridges at the same time, throwing a grenade, or grabbing on onto something. Even with a second set of hands, accurately aiming is an issue so the focus would be on properly aiming the primary gun and using the secondary gun for closer targets (this one will likely be smoothbore). Depending on practicality the secondary gun can be on a gimbal for more freedom of movement while mounted or even on some kind of telescoping mount like the periscope rifles of World War One. Overall, a swiveling mounted gun provides unique opportunities to a species with four arms that aren't provided by existing weapons.

An all-in-one, Swiss knife like, weapon. Extra lever to expel jammed cartridges. Extra magazine. Grenade launcher. Laser that can be tuned to be used as a gun sight or to blind the enemies. Quickly pluggable silencer to use when the fighter can manage the extra recoil. Plus any thing that could come from future technologies.

Probably the biggest change would be the reloading mechanisms. They'd still aim & fire the gun identically to how we aim & fire ours, but with adjusted ergonomics so that one could reload with their free hands. That way they can easily keep aim on their target.

Not the answer you're looking for? Browse other questions tagged science-based science-fiction weapons technological-development humanoid or ask your own question.

39
What would be favoured weapons and weapon styles of a four-armed human?
15
Weapons for Long-armed (Winged) Dragons?
11
What would be the best fighting styles for a humanoid with a low center of gravity?
16
How would a lack of smokeless propellant affect WW1?
15
Best Ergonomic Design for a handheld ranged weapon
7
Could one grow an organic sword?
2
Is this sci-fi weapon of mine realistic?
1
How practical would firearms be for early humans?
16
Taking the bayonet to its logical conclusion. Or, the pike-rifle