Would 6 Earths Separated by 60 Degrees Have Day-Night Cycles? 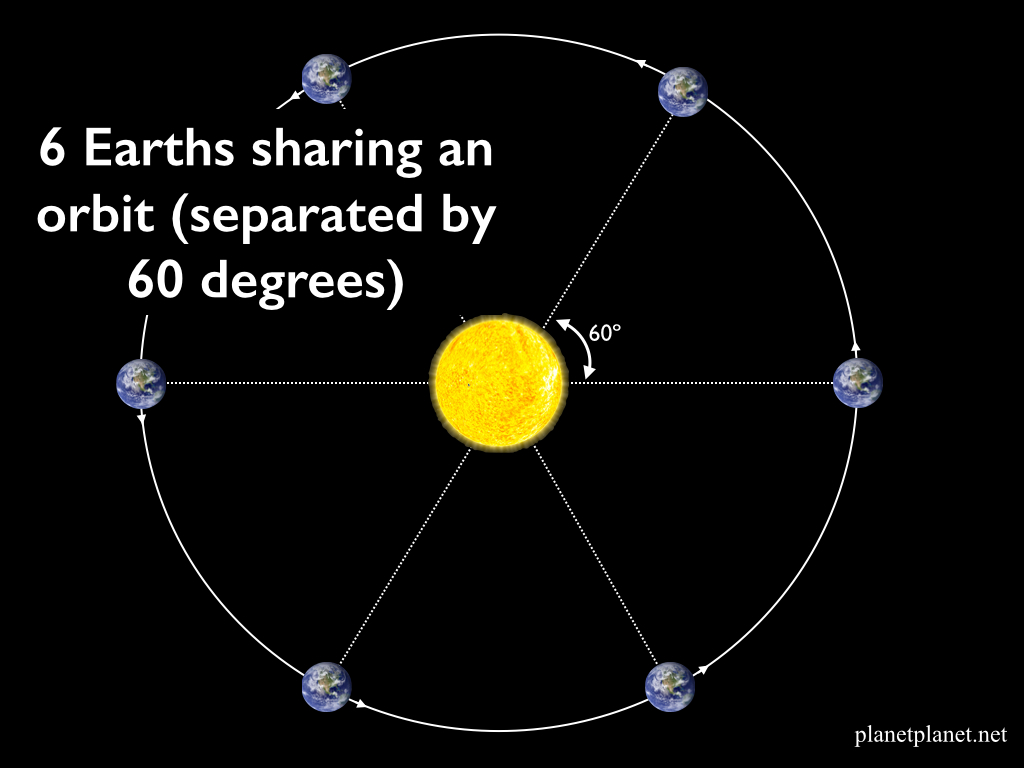 This picture is taken from one of Sean Raymond's Planet Planet articles, Cohorts of co-orbital planets.

What the article doesn't explain, however, is the basis for the question. In a solar system in which six rocky planets, each one the size of Earth and each one orbited by a single moon 1/4 the mass from a distance of 238,900 miles, orbit their sun from one same distance, would a 60-degree difference allow each of the "Earths" to spin in day-night cycles?

Thanks for that interesting link.

Rotation will be maintained

When planet-sun distance and planet mass are similar to Earth's, there is no reason for tidal lock, because the other planets are far away. Tidal locking depends on size, orbit and mass of the orbiting object and the sun's mass. There is no need for symmetry: rotations could differ. The rotation of a celestial body does not affect gravitational interactions with other bodies, because the center of gravity does not move.

In a simulation model, like the one used in the article, you just launch an isolated configuration and wait a few thousand years, until things collide. If they don't collide, conclusion is "stable".

But your picture shows 6 mature, developed planets. In the real universe, planets like Earth exist for >4x10e9 years. In that timespan, orbits get disturbed, eventually causing issues with distances. For example, our moon was supposedly formed by an early collision with a planetary size object. Little is known about earths orbit before that event occurred, but I think "shakeup events" must be included in the simulation ! A subtle orbit disturbance could have grave consequences in due time.

12
Would co-orbital planets with very similar convergent evolutionary paths be possible?
5
Day/Night temperature variation on tidally locked binary planets
0
ELEVEN Inner Planets?! What Will the Ice Ages Be Like?
3
Can A Theia-Like Object Make Earth Richer?
1
If Earth's Moon Were Ganymede-Like, Part I: Rotation
19
I want ten Earth-years long day on my planet. Can I have it?
14
Could We See a Lagrange Giant in the Sky?
2
How many co-orbital Earths can we fit and NOT get them tidally locked?
4
What is the Roche Limit of a White Dwarf Compact Star?
0
In this binary, how far would the secondary planet orbit the primary planet and still have its own day-night spin?