How much weight can a human wear without tipping over?

Let's say that there's a group of humans walking across a plain.

Incredibly strong winds blow across this plain at predictable intervals on an hourly basis.

For one hour, the wind magically blows in from behind the travelers, pushing in the direction they're traveling - so much, in fact, that they need to wear weighted packs on their backs in order to pull themselves backwards and stop themselves from tipping over.

The next hour, the wind dies to absolutely nothing. Zero. Nada. Zilch.

The next hour, the wind magically blows in from in front of the travelers, pushing away from the direction they're traveling. Again, they need to wear weighted packs in order to stop themselves from tipping over; however, in this case, they have to be on their front, in order to lean them forwards into a wind that's trying to push them backwards.

The next hour, the wind dies again, and the cycle repeats from the beginning.

Hunkering down during the windy hours and moving during the clear ones is not doable for a couple of reasons that are irrelevant within the scope of this question, as is splitting the group up. This means that they have to carry the packs constantly, rather than ditching them.

Assume that they magically have infinite endurance (not strength, endurance; they can't carry infinite weight, but they can carry some weight forever), don't need to sleep, etc.

Question: how heavy of a backpack can the average human wear on their front or back while still maintaining a walking pace and not tripping/falling over/etc?

Let's say that they're wearing a high-quality hiking backpack that transfers most weight to their hips.

On long duration hiking trips, every extra gram of load is meticulously considered. I personally know a guy who cuts down his hiking toothbrushes to half size to avoid the extra weight. Additionally, these people are presumably going to be carrying water and food with them, which are used up as they go, resulting in lighter packs. Are they going to carry their excrement with them? Not likely. Even less likely would be requiring people to carry useless weights.

Specific to this windy situation though, I don't really think it makes sense to continue onwards when facing a headwind of dangerous speeds. All you'd be doing is tiring out the travelers, crossing less distance, and risking injury from the ground debris/insects/whatever which will doubtlessly be flung at the travelers. Also, when they have a tailwind, that's free energy!

I think there are several clever options your travelers could use:

The earliest records of people putting wheeled sailing vessels on land date back to ~500AD, but they've been used occasionally ever since. A notably relevant example would be that these vehicles, called "windwagons" were also used by American settlers crossing the Great Plains: 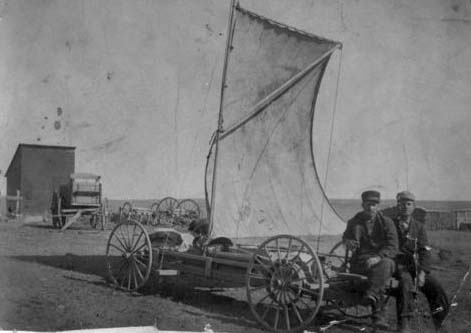 They can also be built quite large, as seen in this example: 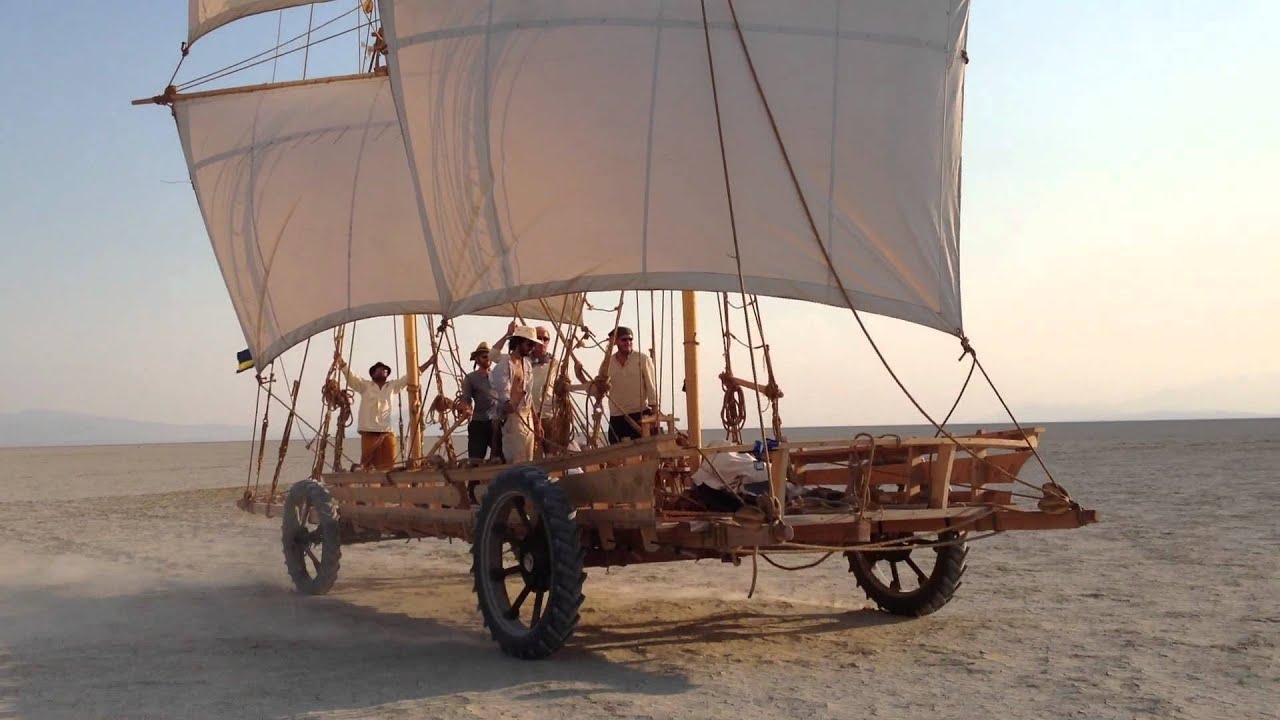 With such a vehicle, the group of travelers could make progress at all times:

Each traveler carries a small kite that is proportioned to their body size. It is easy to repair and disassembleable when necessary. Additionally, they have a harness on their body which allows them to tie the kite's rope to their center of mass. Then, they simply:

Your "tipping point" happens when the wind basically pulls your center of gravity outside of the area of support between your feet. That is highly dependent on the size of the people, their surface area and the windspeed.

I myself have once been in such a gale wind that I had to lean forwards, but each time I tried to take a step my foot was simply blown backwards, I did not have the strength and leverage to put it in front of me. To my surprise I had leaned so far forwards that my hands could reach the ground in front of me, so without leaning on my arms I used my hands to pull myself forwards. I had no packs, so theoretically your travelers could do something similar. Going the other way all I had to do was lean against the wind and lift my foot, then put it down as the wind would push it forwards.

First, a big caveat - I have no idea what "the average human" is like. Is it the mean of all humans alive today, including newborn babies and adults with infirmities that don't allow them to walk? Is it the median of all those that can walk? Note that just the word "average" has multiple meanings in statistics.

Hence, my answer is based on the standard "marching order" loadout for Australian infantry soldiers from 20ish years ago. Not everyone's load would be equal, depending on exact weapons and equipment, but generally it worked out to 30-35 kg per person. Not all of it was on the back, but if you had to strap your weapon to your pack then it was still able to be carried. Adding much more weight (eg "how about you carry the 84mm Carl Gustav too") had a significant effect on performance, so going much above that is a problem.

Similarly, when you had to get on certain military aircraft for short flights on the lovely inward-facing seating then pack, webbing etc was all carried on the front of the body and was on your lap for the duration of the flight. The awkwardness of carrying the load on the front was more due to the height of the pack blocking vision rather than the weight.

However, now that I've breezily asserted the weight (OK, kg are mass, the weight is approximately 300-350 N for those being pedantic about units) I'll mention why adding weight to the front or back isn't going to help. As mentioned by @SonorelHaetir in comments, a good pair of walking sticks will be much more help. You do not want to be standing up as straight as possible in a wind that high, you want to lean forward and reduce your cross-section. With a tail wind you can make up time by jogging with greatly reduced effort even uphill if not heavily laden. Given that the question makes it mandatory to keep moving during the strong headwind, leaning forward and using sticks or other handholds to keep moving forward is the way to go. Regardless of whether the wind is in front, behind or nil, increased weight will decrease speed for a person of a given strength.

The above assertions are based on near-daily commutes either cycling or (mostly) running across a >1 km bridge where some genius civil engineer decided to create really narrow pedestrian walkways (just wider than the handlebars of a single mountain bike!) elevated above the roadway and fully exposed to the winds from all directions. The trick is always leaning into headwinds or crosswinds, using the railings as handholds in extreme conditions (in place of walking sticks that would skid off the surface). On the rare occasions where there is a favourable tailwind it is possible to run almost effortlessly.

Weight might be helpful but your wind catching surface area might be just if not more important. That said I'm not sure "tipping over" would be the main issues. More likely its how much energy you need to expend to travel.

This video demonstrates just how tiring it will be just to stand let alone walk. https://www.youtube.com/watch?v=O4pFdLJmG7M&ab_channel=NBCNews If you did want to add weight you would want it as low and compact as you can get it. Though adding weight will also take energy to move so it might not really help.

Not the answer you're looking for? Browse other questions tagged biology humans wind .

7
How would the Lilim live?
9
How would red eyes occur in a human (without underlying medical conditions)?
10
How much chemical energy is readily available in the human body
3
Would enabling a human to chew his cud make him lose weight or gain weight?
7
How much would a 3" human male weigh?
5
How can human biology be built to allow consistent usage of 100% of the body's muscles without wear and tear?
8
How much Power ("energy") can a human body metabolize?