What would be an environment conducive to the evolution of varanids based Naga?

I already made this question Naga evolution based on varanids related with the viability of varanid nagas. Any ways here I let the most relevant part from that question to explain my reasonement.

Varanids currently are very good swimmers using anguilliform or serpentine moves to swim this might cause the reduction of the hind limbs by adapting to aquatic environments. And varanids are closely related with snakes and mosasaurids. 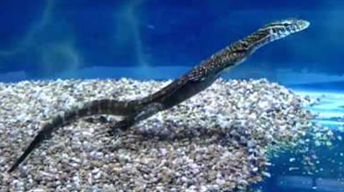 This could have explained the presence of a large snake-like body.

Then, to explain the humanoid part of the body. Many varanids are arboreal too, some species just during their young and others during their entire live, this life style eventually might evolve hands to improve the arboreal locomotion, at the same time getting more complex shoulders and expanding freedom of movement of the arms, improving the object manipulation, maybe with some time would change some aspects of the rib cage. 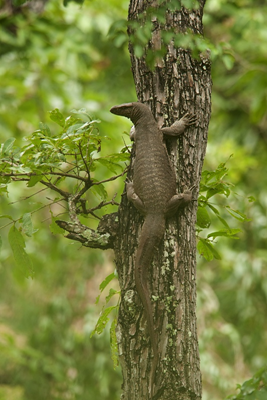 Varanid species are very intelligent too, they know how to count and have one the highest energy and more active lifestyles in reptiles and with a four chambered heart, this would permit the energetic requisites of turn to a sapient specie.

This all is because I want to make some "realistic" Naga species evolved in a natural way without genetic engineering and the options from the question "anatomically correct naga" didn't convince me.

But the problems appears in the adaptive part, there are varanids more adapted to the arboreal life, others to digging or run, others to swim, but none is simultaneously such good for the mentioned life styles and this might cause that none could get a combination of the mentioned adaptations and abilities.

I meaning, I think the most probable case for the evolution of a varanid is to get just one set of the mentioned features generating different species to due the niche partition.

So the question is which would a propitious enviroment for impulse a species to get the mentioned naga features and avoid to evolve in different species?

This reminds me of one of my favorites: Avian Crocodylomorph

The avian crocodylomorph could fly. But you ask for less! You just want a swimming varanid with prehensile forelimbs.

The big ones swim and are basically mosasaurs. They are quite big.

But when they are young they live in mangrove swamps where they are not exposed to big predators that snap them up. The small young ones are semiarboreal and leave the water to clamber around in the trees, escaping crocodilian predators. And while they are up there, eating crabs and birds! The juveniles are smarter than the adults, because the complex ecosystem of the mangroves favors intelligence.

The lineage that gives rise to your sentients is from a neoteny event. If they grow up and get big go out to sea it is a hard world, because there is competition out there from things that are faster and fiercer. The mangroves are good to these lizards. The slower they grow up the better they do, until some can reach reproductive maturity but stay the size of juveniles.

There is your naga - a swamp varanid with a long swimming tail but forelimbs adapted for the trees.

4
Are religion, emotion, and individuality binding factors for evolution of a technology-based society?
12
What would animal life on a methane world look like and how would it evolve?
6
Non-predatory evolution
2
What can give a species superpowers without being magic, evolution or interference from ancient aliens?
8
Would this dragon-rider combo be physically plausible?
14
How big can Europan fish get?
4
Naga evolution based on varanids
6
What would be a propitious environment in which centaurs could evolve?
3
Flatworm's features kept in convergent evolution with vertebrates?
3
Can reconnection of continents be sufficient reason for the evolution of sapience?