Viability of polycephalia, but the extra heads aren't intelligent?

Based on the existance of animals which born with extra heads as the form of parasite twins and the difficulty of justify multiple heads creatures. 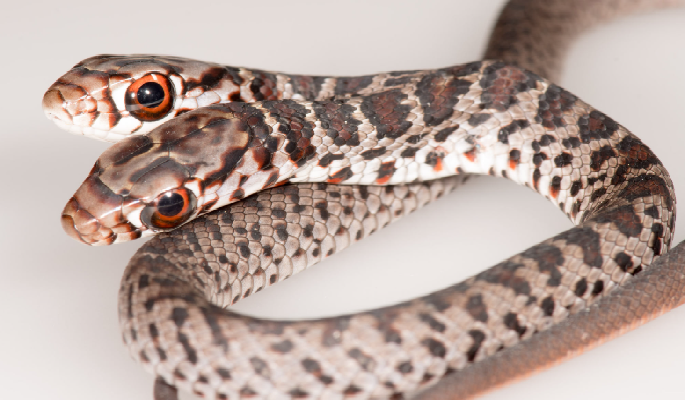 I was thinking that a possible way to get them as realistic creatures could be the case in which the extra head or the parasite twin doesn't have "good" or enough brain functions to cause the problems related with fights between the two heads and unnecesary energetic waste.

This might have two possible ways the extra heads just having the most primitive instincts without any "intelligence" just being able to receive and percibe signals as light changes or smells, but at the end unable to take the body's decissions.

The other possibility is that extra heads don't have any cognitive capacity at all, could be malformed heads that are only capable of moving the jaws and the base of their "neck" but nothing else, basically turning into extra limbs.

The first thing that comes to mind is General Fallon from the movie Jack the Giant Slayer.

Fallon had two heads. The second was smaller, unnamed, and capable of independent thought and observation while unable to exercise any control of their shared body. It appeared to be less formed than the main head and less able to speak properly enunciated words. This might have been due to not having full control of a shared airway. - wiki

And the second is .. I can't quite place it but I saw a movie once that has some kind of alien that has a tumor in his belly that can talk ( pictured as a babyhead on the belly ) maybe it didn't have to be a "head". A tumor or a parasitic creature work best for your need.

Not the answer you're looking for? Browse other questions tagged science-based reality-check evolution anatomy mutation .