Camazotz is a deity present in the Zapoteca, Mixteca and Maya cultures, a creature commonly represented as a giant humanioid bat and maybe inspired by the existance of the giant vampire bat, Desmodus draculae with fossils which were found in the South of Mexico.

Also this deity could be basically described with an angel of death.

Looks easy to solve the problems of this creature, because bats currently have a very humanoid shape and the biggest species are quiete big. 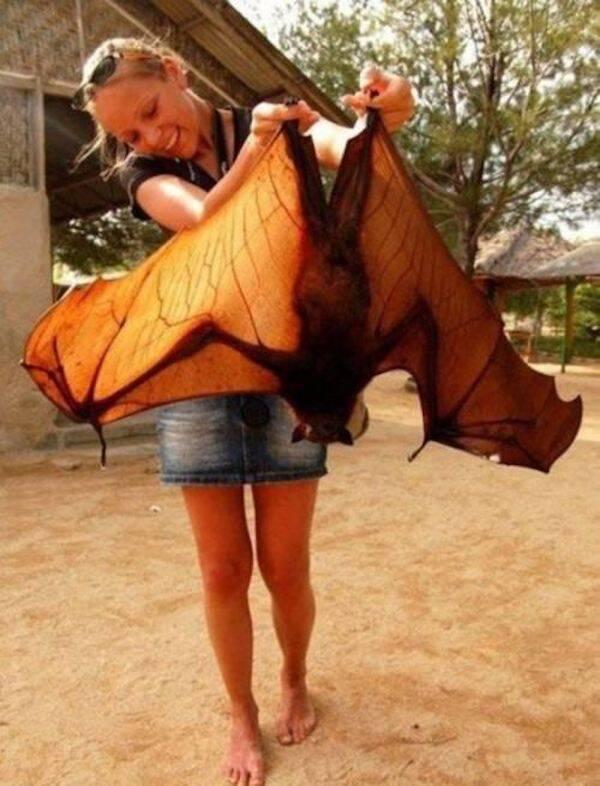 This bat could have evolved to live in trees. Brachiation is a useful way to get around quickly, especially for a bat, which already has a good chunk of the required limb adaptations. This solves most of your problems already

It would probably need a meat/fruit based diet to reach these great size, but it could still have adaptations for drinking blood

The human-faced genital is easy, and could probably be achieved with some aposemantic markings

I'm not sure if such an animal could ever fly, but I've got the rest of the points

Welcome to the island of Batavia:

On Batavia, a niche environment has developed where large megafauna herbivores existed, but the niches for predators are unfilled. Into this environment land a few bedraggled Giant vampire bats. Initially surviving on it's traditional diet of blood from the megafauna, the bats supplement their diet with hunting rodents and small animals (eating meat). Lacking substantial competition, they increasingly feed and hunt all day.

As climate changes put more pressure on the megafauna, the large herbivores go extinct and the bats are completely dependent on hunting. The bats still try to feed on the now smaller herbivores, but their more nimble size makes them harder to feed on than larger prey. The tall grasses that grow thickly with the passing of megafauna are challenging to catch their prey in. Things look bleak for our bats.

But they develop long legs to reach down into the grasses and keep their fragile wings from getting damaged. Without other predators besides other bat species, they can afford to glide instead of fly (allowing increasing size), walking to the nearest trees to take back off. An upright stance means they can see above the tall grasses on the ground if they walk, scouting for rival bats and prey alike. Wings are kept up in the air to avoid damage. As their size increases, they gradually take on bigger and bigger prey.

With hands free, some clever individuals start carrying large local woody branches with numerous broad leaves as supplemental lift surfaces, dropped during attack. The feet are clawed but can also grasp these branches. A few eventually start hitting prey animals with them. Gradually, individuals either sharpen the stems to make them better weapons, or weave additional leaves in to make them better for flying.

Evolutionary pressure encourages the bats to use these early tools to supplement their fragile bodies. Sticks used as weapons are valuable and the bats keep them. Some start using them like stilts to get even higher above the grass. Suddenly, the bats all seem much taller!

So now you have a smart, aggressive and predatory, mostly flying but partly gliding species that can kill silently in the night, use tools, appear extremely tall, and with wings extended looks enormous.

If this animal then comes into contact with early humans, it learns to intimidate with display. What originally was a sexual display to impress the opposite sex but vaguely resembles a human face plays on the superstitions of the humans, who are more likely to be frightened away by a giant bat-god with a face in the genital region (so the individuals with these parts most like human faces are more successful in avoiding predation by humans).

Not the answer you're looking for? Browse other questions tagged science-based creature-design evolution mythical-creatures anatomically-correct or ask your own question.

4
What would be the physical characteristics of a sapient, mountain-adapted, gliding mammal capable of magically producing thrust?