Analog to water in rain

While on earth it usually rains water, it usually isn't a sight to behold. To spice things up, I would like the rain to truly remind its colonists that they're on an alien world. However, this exoplanet has an oxygen and nitrogen based atmosphere. Which brings me to the question: What liquid might rain instead/alongside regular water? Note: solids such as snow or hail are valid aswell!

If you were able to give the chemical reactions to create the gas, liquid or solid it would be much appreciated as well!

Suppose some part of the planet in question (possibly an inaccessible region like a high plateau or the poles; whatever your plot dictates) is covered by what amounts to an enormous oil-field. Perhaps millions of years ago, a large and fertile algal sea dried up and was buried by some geological event.

Now, in the (geologically) recent past, something has suddenly uncovered a significant fraction of the oilfields. Could be tectonic activity, an asteroid impact, or anything else that suits your plot. After the really volatile stuff in the crude oil (methane, ethane, propane, butane, hydrogen sulfide, etc.) has evaporated (and perhaps been consumed by microbes or flora), there'd be a period when the slightly-less volatile hydrocarbons would evaporate. Hexane, for instance, fits your temperature requirements pretty well, it doesn't mix with water to any significant degree, and its solvent properties would make it very easy to distinguish from water rain. It's slightly toxic, and it's a nervous-system depressant, which would have to be worked around.

Another possibility, springing from the same root idea of suddenly-exposed petroleum reserves, is a massive oilfield fire in some inaccessible part of the planet in question. This could give you a couple of different types of rain/precipitation. The volatile stuff (anything natural-gas-, gasoline-, or diesel-fuel-equivalent) would boil off and burn pretty early on, but if the fire decreased to a lower intensity after that, it could evaporate analogues to heavy fuel oil, which could be carried by a jet stream or similar until the droplets coalesce sufficiently to rain out. Or, the precipitation in question could simply be "snowflakes" of fine soot which aggregated in the upper atmosphere. In both cases, it'd be very distinctive black precipitation. Tarry oil in the fuel-oil case, and black graphite snow in the soot case. 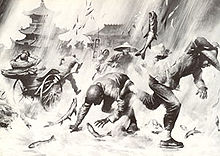 Fortean rain is sweet. And you do not risk someone scoffing at the fact that you have bromine or siloxanes somehow be compatible with your otherwise earthlike atmosphere. Rains of animals really happen!

Such events are freaky enough on earth. On your alien planet it is extra freaky because it is a rain of alien animals; perhaps from a far ocean or high in the atmosphere. And also it is more fun to write about. After everyone collects siloxane from puddles to comb into their their hair you are kind of done. Alien animals falling everywhere provides much grist for your prose mill.

There are some trees similar to poplars

Poplar trees have seeds that are covered by a fine hair, that allows them to fly and disperse. In many places, the poplar trees release in the spring a lot of fluff, which really seems like a (slightly ennoying) snowfall (I can confirm)!

In your planet, almost all plants need wind to disperse their seeds (maybe birds never evolved), so these fluff snowfalls are very common.

A classic writing prompt used in elementary school is "The Day it Rained Lemonade". When I drew that, I set it on an space station like an O'Neal Cylinder where rain was artificial. Any issues with the pipes, or even something like a leak in the infrastructure in the "hub" can rain down to the living deck.

Not the answer you're looking for? Browse other questions tagged science-based reality-check chemistry weather biochemistry .

9
Must all planets have a solid/liquid core?
6
Is a planet with only vaporized water atmosphere livable?
11
Is life required for a world to be habitable for humans?
6
Which hydrogen halide to have in blood to replace water?
1
Waterless planet with vapor geysers
19
Is it possible to place a permanent probe on Uranus?
3
Would these processes be probable on this planet?
5
How should the human respiratory system be changed to be able, in addition to oxygen, to breathe chlorine or hydrogen sulfide?
6
Energetics in a reducing atmosphere