While European Dragons are often described as bat-winged, there are many depictions showing otherwise. Some give them fins or sails, and others depict a structure never seen on a living animal

This structure resembles a fin with many rays projecting down from a horizontal 'spine'. The rays also flare out towards the ends, with the flaring more pronounced at the distal end. This strange structure is (at least in some depictions) connected to to body by a straight stalk, which attaches to the structure at the end near the head, and to the back just above the shoulder. This type of 'wing' is often seen on generically reptilian dragons, which have a mixture of lizardly and crocodilian traits 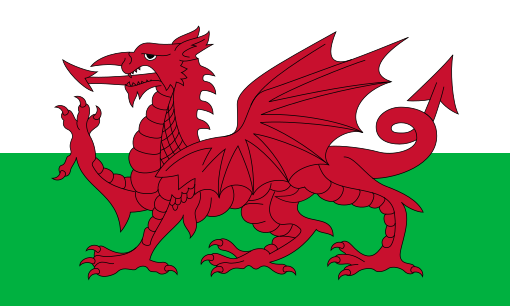 The Flag of Wales shows this structure

What is the simplest way for such a strange structure to develop from more realistic organs?

These rays produce venom that will kill would-be predators (such as tarrasques, leviathans, rocs etc.). The membrane between the rays is the venom-producing organ. Notice how these rays shield the dragon from predator attacks from many different angles.

In this way the dragon is almost like a lionfish. They could have got those from their smaller ancestors, who hid from regular sized predators such as griphons and chimerae.

Suppose, earlier in their evolutionary history, dragons were smaller. As they evolved to grow larger, their surface-area-to-volume ratio began to make thermo-regulation a problem. They might develop short vertical pairs of fins (possibly made from modified scales) to improve cooling. As they continued to grow larger, however, these fins might prove to be insufficient, and the dragons would have to evolve larger ones. Eventually, if these bio-radiators got large enough, they would likely begin interfering with each other's efficiency (if they were still placed on the back, then their inner faces would be radiating heat at each other). At that point, there'd be an advantage in evolving natural radiators which could be separated from the body by stalks (full of large blood vessels), and which could be maneuvered for maximum efficiency, or even fanned (like an elephant's ears) to increase airflow.

The transverse processes of the vertebra.

Here is Dimetrodon with its excellent sail. 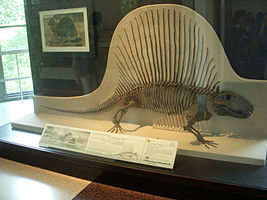 A closeup of the vertebral body with spine. 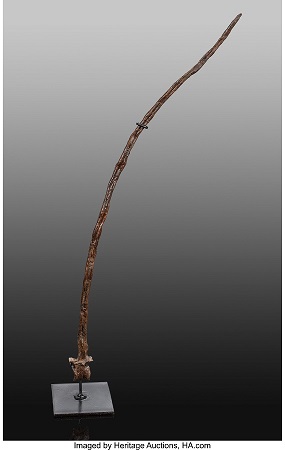 Dimetrodon here made its sail out of the spinous process on the vertebra. But also available are the pair of transverse processes.

Your dragon makes its pair of dimetrodon-like sails out of the transverse processes.

Start with a pteranodon

If the membrane attachment migrates up the legs, along the ribcage and just to the end of the shoulder, you'll also get the "wings on stalks" that you want. Having done so, adjusting the lengths of the carpals and phalanges to give whatever length ratio you want moves the center of radiation in or out as suits your plans.

(It's worthwhile to remember that pre-modern peoples also found fossilized skeletons, but did not necessarily have the geological and evolutionary/morphological mental tools to understand what they found. The particular wing feature you are describing may well come from an attempt or multiple attempts to describe and/or understand fragmentary fossilized skeletons of one or more winged dinosaurs.)

Seeing how the dragon has its four limbs intact, it looks much more like a Chlamydosaurus (frill-necked lizard, frilled dragon) where the "frill" split in two and moved a little bit further down: 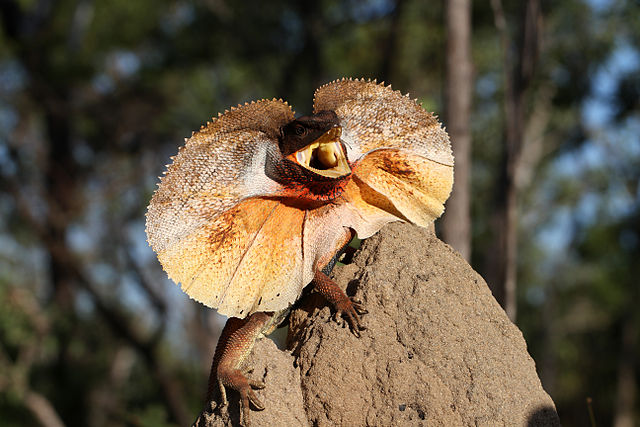 I can see how this could turn into wings if it initially got some lift when jumping, and the more split they were, the more control it had. Eventually they would migrate further back closer to the center of gravity.

In short, polydactyly is a condition caused by a mutation that causes the growth of additional fingers or toes. In this particular case, the dragon has a bat wing with with eight fingers, giving it three extra fingers beyond what a bat wing would normally have (if the thumb is also included in the structure of the wing, which it seems to be).

Not the answer you're looking for? Browse other questions tagged creature-design mythical-creatures anatomy dragons anatomically-correct .