How Quickly Would the Pioneers of this Seeded Jurassic World Alter the Climate?

Sometime last month, I have compiled a comprehensive list of all the prehistoric creatures featured in the bulk of the Jurassic Park franchise--in the five established films, in the upcoming Dominion film, the Evolution video game, the Camp Cretaceous TV show and, most importantly, the original novels:

Now, in a future history scenario, these listed creatures, as well as every plant, other animal, fungus, microbe and even soil of every paleo-ecoregion that they inhabited, were selected to seed Earth. The chosen date was 247 million years ago, right on the heels of the Smithian-Spathian boundary extinction event, which saw a climate spike so high that the tropics were virtually lifeless. What was more, life on Earth was itself on the heels of the Great Dying, the worst of the mass extinctions, in which 70% of all terrestrial species and 96% of all marine species went extinct as a result of one wave of lava eruptions from Siberia, followed by the the global supply of frozen methane being released at once and ending with another wave of lava eruptions, again from Siberia. In the original timeline, life did not fully recover from the Great Dying for 30 million years.

Even so, why set the seeds 247 million years ago? Why Pangaea? Why not an earlier, more barren supercontinent, like Pannotia?

But where are we going to find room for such an extensive list? Turns out that Pangaea was more diverse than just desert, as presented in this drawing by Gary Meaney. 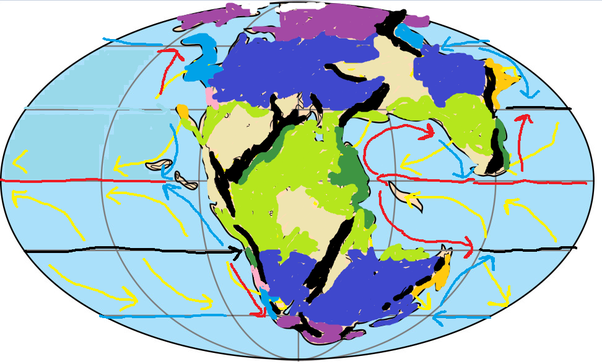 The black lines represent major mountain ranges. The deserts that stereotyped the Triassic are marked in the sandy colors. Light green, something of a milder, more savanna climate. Dark green, a climate range more akin to today's jungles. Dark blue, continental temperate (think the American Northeast.) Light blue, oceanic temperate (a bit like Western Europe.) Orange, Mediterranean. Pink, humid seasonal subtropical (think American Southeast or southern China.) Finally, there is the taiga, marked in purple. (However, considering the Triassic's warmer climate, the taiga might not have such an extreme swing of seasons.)

Without doubt, such a massive seedlist would result in an excessive glut of competition for food and space in both the day and the night shifts. However, the question instead is this: Once the pioneers have settled in to their new timeline, how quickly and extensively until the plants and soils in the seedlist started altering the climate, thus resulting in a potential mass extinction?

For one, it's not clear if you are talking about introducing the plants of these ecosystems first (given your question is focusing on plants), or talking about just dumping these microcosms of the (primarily) Jurassic and Cretaceous into the Triassic. Broadly speaking, introducing a bunch of these organisms into the early Triassic won't cause any mass extinctions, because there is almost nothing there to go extinct. The Earth still hadn't recovered fully from the P-T and ecosystems then were pretty bare bones. About the only area that wasn't was the marine fauna from Hubei province which records the early diversification of ichthyosaurs and their relatives.

Broadly speaking, dumping a bunch of late Mesozoic animals in that time period right after there have been two extinctions in a row and Earth's ecosystems were still in pieces would cause little to no extinction at all. The late Mesozoic animals would just expand into the empty niches, and while their appearance in the fossil record would be abrupt they wouldn't have actually wiped anything out through competition. Indeed it's possible given how big and uniform Pangaea was that what little early Triassic life there was would have adjusted to fill niches not occupied by the later fauna or remain untouched in some far-off corner of Pangaea (e.g., the really arid zones).

The other main uncertainty regarding your question is that there is no reason why these later Mesozoic plants would alter the climate at all. After the Carboniferous there isn't much evidence of plant evolution having any large-scale effects on Earth's climate, in contrast to what happened during the Ordovician-Silurian (colonization of land), Devonian (evolution of trees possibly inducing the Devonian extinction), or Carboniferous (large numbers of then-indigestible lignin-bearing plants resulting in a drawdown of carbon). In terms of their effect on the climate a Triassic conifer is the same as a Cretaceous one. If anything it would make the global biosphere recover faster, because you have large bubbles of intact forest balancing the carbon cycle and providing reservoirs of diversity to spread outward. A bunch of conifers and other plants messing with the carbon cycle already happened in the Olenkian IRL, with forests re-establishing themselves some time in the Anisian.

More broadly, the answer to your question is: they wouldn't alter the climate at all or cause any mass extinction, what you are proposing is from a geochemical perspective no different than what happened in our timeline.

Not the answer you're looking for? Browse other questions tagged science-based science-fiction terraforming climate-change prehistoric-times .

0
Meteor Impact Events and Magnetohydrodynamics
18
How long could an operational Virginia-class sub survive in the Jurassic sea?
6
Could an earthquake alter weather over the long term, and therefore climate?
13
An Inverse Great Dying
15
Mass extinction because of too low CO2-levels
6
In an Ice Age Extinction, Which Latitude Would Be Hit Harder--Tropical or Temperate?
6
Who on Land Will Survive The Inverse Great Dying?
5
How would this island tribe survive when a tornado meets a volcano?
2
What Size and Likelihood Of An ET Impact Would Destroy A Small County Sized Region But Not Our Species?