My human colony on Mars uses gentically modified archea/bacteria to turn dust collected from the surface of the planet into construction material and breathable oxygen. Technicalities of the processing method are not relevant, colonist put dust into machine and machine outputs iron sludge for further refinement with oxygen as a byproduct.

My question is: how much of this is science and how much is it fiction? How far are we in aspect of bioengeneering to be able to create such organisms (to my knowlegde no such archea/bacteria exists in nature). How efficient could be this process in terms of kg of raw materials processed per hour/day? What would be the biology of such organism: should it be fed scraps, exposed to sunlight, could it sustain itself from processing iron-oxide itself?

Now I see a fundamental problem with my idea - unless the organisms arrange the iron into immediately usable structure, the colonists would still need to smelt the sludge at the same temerature as the raw ore, so the whole process didn't contribute anything in refining. Which is fine, maybe the bacteria coats itself with iron shell as sugested by @L.Dutch and fills the prepared form with a porous, iron slabs ready for construction after treating them with hydraulic press.

But assuming that the colonists would actually want to smelt (or rather bake) the resulting substance, is there a chemical compund that is:

If you go from iron oxide to elemental iron in an oxidative environment you are going up on the free energy ladder, while spontaneous processes prefer staying low on that ladder.

This means that the only way to achieve that outcome is putting energy into the process. This is why when smelting iron from iron oxide, one needs to burn coal: it provides the needed energy by burning, and also provide a reducing environment where the reaction can happen.

If you want that to happen in a living organism, there must be some reason for the organism to put energy into the process. Photosynthetic organisms do something similar because they produce energy rich substances (polysaccharides) starting from CO2 and H2O, while releasing oxygen.

Iron doesn't form chain compounds like carbon, so the photosynthetic way seems off. Maybe some bacteria can be engineered to produce an iron shell which is then used as a shield/absorber of EM radiation (on Mars it could be handy).

The shells could be used by your people as starting material for their processes, in a similar way to how diatomite is used on Earth 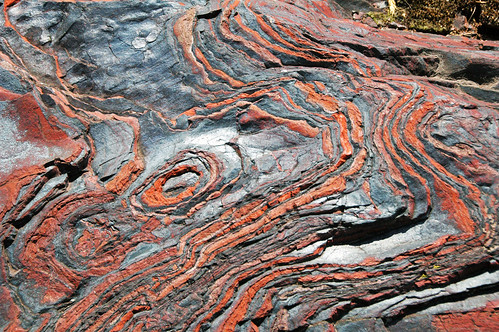 As illustrated in this 1.874 billion year old rock from Michigan, there was a time when Earth's oceans held a high concentration of dissolved iron. It came out of solution when a strange new organism started a biological catastrophe - one which surrounded the Earth in a toxic shroud of a formerly exotic gas known as oxygen. This converted Fe2+ to Fe3+, and the Fe3+ came out of the oceans in vast bands that contain most of the currently mineable iron on the planet.

Fe2+ - iron carbonate - is a very plausible compound to produce on Mars. All you need is iron, water, and carbon dioxide. You might find a workaround for the water.

Reduced iron is also desirable. One commenter noted it is pyrophoric, and it is ... on Earth. Most people would be surprised to hear that a planet covered in one of nature's strongest gaseous oxidizing agents might pose a problem for delicate chemical reactions. Even the natives are prone to inadvertently detonating chemistry labs, and for life forms that evolved in gentle oceans of diethyl ether, the planet is on the Do Not Travel list. Nonetheless, pyrophoric iron is actually made under a CO2 atmosphere, and it is perfectly stable there.

When a region of Mars is doused in melt water, the bacteria will do several things.

5
Can you forge iron from oxide dust?
6
Is this Martian creature plausible?
4
Would a parasite that turns peoples into succubi/incubi be possible?
6
How to design a proper void whale?
5
Making the moon red? Physics please!
4
A chemical process that creates sapphire bones
6
A creature that turns all water near it into slime
12
Could a biological creature get oxygen from oxide rocks or by breaking down H2O?