How does a species of animal dig through rock instead of dirt?

So basically I am trying to populate ravines and canyons with fauna that digs through rock and make extensive networks of tunnels to live in. They don’t need to be fast diggers by any means, solid rock is far harder to dig than dirt or sand. However the burrows would be permanent and offer better protection against predators and the environment. Predators that can fit through the tunnels may still be a danger but it’s far easier to defend oneself in tight spaces by blocking entrances or lunging at the attacker. The creature would occupy the niche of a herbivore that live in communities, stashing food into the tunnels chambers. These animals are essential for the ecology of that environment thanks to their burrows creating homes for many other species.

What I would like to figure out is the body plan and necessary adaptations of such a creature.

How does a species of animal dig through rock instead of dirt?

Some already do but none of them are fast.

None of those examples really look all that different from normal animals of their type, of course If you want something that does the same thing at speed then that may be a different issue. 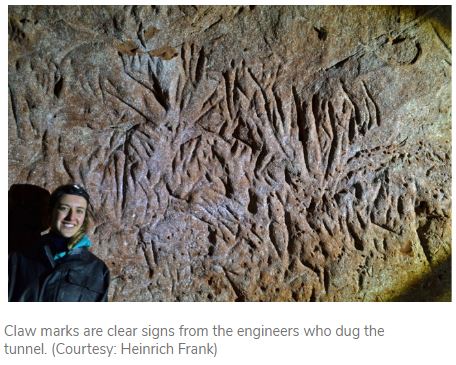 Paleoburrows are giant tunnels through rock, excavated by extinct South American megafauna. Opinions differ as to whether these tunnels were excavated by giant sloths, giant armadillos. I favor both, in a team effort.

These burrows are found in continental settings, in substrates that include consolidated sands, sandstones, and weathered granitic and basaltic rocks ranging in age from the Precambrian to the late Cenozoic. The size of these structures precludes their assignment to any living species, and therefore, they are considered paleoburrows (i.e., produced by extinct organisms)... Large (about 2 meters in height and up to 4 meters in width), subelliptical paleoburrows that can surpass 50 meters in length and become narrower towards their ends. These megatunnels are subhorizontal; so far, no body fossils have been found inside, but scratches produced by the diggers are present along the walls...

Tunnels that have not been choked with mud and silt are big enough to walk through and some are big enough to drive a car through. The longest one found so far is 2000 feet long! It is not known how long it took for digging animals to excavate these tunnels. It is known that they are super cool. This would be perfect for a fiction and the body plans of both giant sloth and giant armadillos are known from their skeletons. 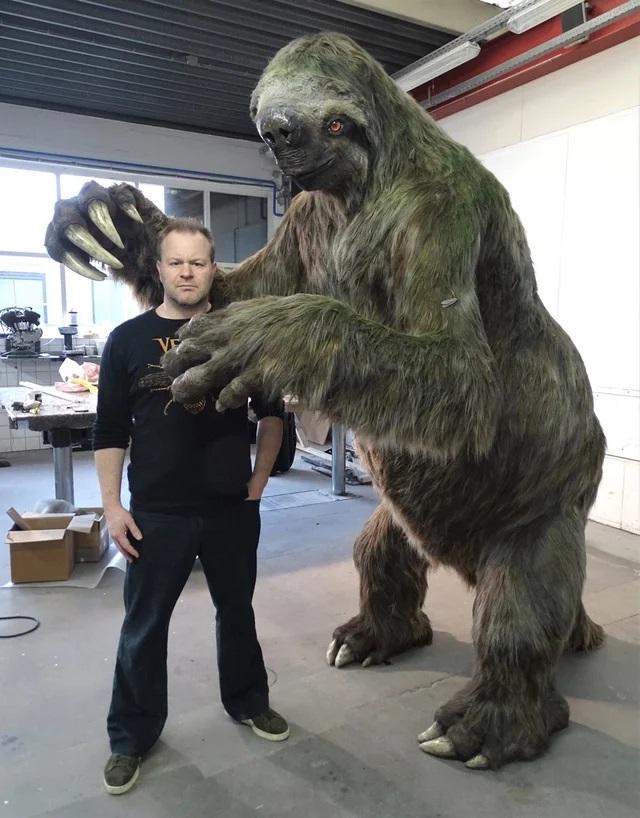 With tools. There are plenty of actual animals that can use simple tools, so any animal picking up a rock and bashing it into a wall isn't hard to imagine. And a Mantis Shrimp is capable of punching at 23 m/s, with a force of 1500 N. They have been known to smash the glass out in aquariums. If giant Mantis Shrimps picked up hard sharp rocks (like flint buried in chalk), they could probably progress quickly compared to other methods. It's likely how early humans did it.

Like some animals sweat pheromones (territory, sexual marking), or saline solution (cooling), through their paws/hands, theres no reason why a creature couldn't have mildly acidic sweat/secretions. Not on the scale of Aliens, just enough to weaken and burrow into a very alkali rock such as limestone.

In a number of places in the world, people have cut tunnels and homes into volcanic tuff. That is a fairly soft stone and I think that a number of animals could dig into it. For example, Cappadocia has both homes cut into volcanic tuff towers and into deeper areas. Bandelier National Monument has a history going back 11,000 years. Both places have deeper valleys.

Your story can have both critters with claws and soft stone to dig into.

Unless they enlarge existing tunnnels or cracks in the rock which are ventilated they would not have enough oxygen. The soil is porous and lets some air go through, the rock is not, they could not stay very long in a deep unventilated burrow.

Take a cue from Tremors, and just assert that it happens:

an enormous burrowing wormlike monster suddenly erupts out of the ground

As mentioned in comments, this is going to depend on the type of stone and how quickly you want it done.

Sandstone, soapstone, some pumice and a number of other types of stone are less than 3 on the Mohs scale, meaning you can at least scratch it with a fingernail. Most animals with good strong keratin claws can dig through these with a little effort using nothing other than their claws. It'll still be slow, but with some persistence it's not hard... sorry, had to be said.

For tougher types of stone nails aren't going to be enough. Up to ~5 on the Mohs scale you're working with material that's softer than human tooth enamel and the more dense bone structures of the human body. Animals with stronger teeth aren't terribly uncommon, and there are several types of animals in the world that grow new teeth throughout their lifespan. Properly configured this will get you almost as high as granite, letting you tunnel through marble or dolomite.

From Mohs 5 up you're going to need something better than the norm for hard biological structures on Earth. At this point I'd switch tack and look for a chemical solution (yeah, I know, just ignore the puns). Acids sound like a good option, especially as acid production is a routine function of most animals. You'll need to adjust the particular type of acid to better fit the rock type you're attempting to tunnel through, both for efficacy and to minimize the toxicity of the reaction products. And you'll want a decent airflow.

On the plus side you don't have to actually dig the tunnel with acid, just use it to soften up the work surface until it's weak enough for you to dig out the next layer. It's a slow process, but still faster than trying to scratch or chew your way through granite.

For more esoteric options, you can do a lot with ice in a rock face filled with microfractures. In a sub-zero C environment (< 32F for the Americans in the audience) all you need is an organic antifreeze that either breaks down quickly or with some enzyme action. The antifreeze lets water stay liquid long enough to seep into the cracks, then when it breaks down the water freezes and breaks the rock via expansion. Repeat the process until you have friable rock that can be easily cleared to allow access to the next layer.

If ice isn't really your speed, how about something biological that's a bit more explosive? Bombadier beetles mix hydroquinone and hydrogen peroxide and combine the mixture with an enzyme to produce an extremely energetic reaction. While it doesn't get much above the vaporization point of water, up to 1/5th of the mixture of hydroquinone and peroxide can be vaporized. If you could externalize the reaction then it might produce enough heat and pressure to crack the surrounding rock. With the right combination of reactants you could perhaps end up with an acidic compound... or cut out the middle-man and just use the peroxide to eat the rock for you.

Stepping out of the normal biological mold, there are all sorts of creatures in fantasy and science fiction whose natural processes grow crystalline teeth rather than the less durable enamel-coated structures we use. Imagine a process that lets an animal grow teeth and/or claws out of quartz (7 on the Mohs scale), corundum (9) , or diamond (10). Even if they were fragile to impacts and therefore not much use in a fight, they'd still be good for grinding away at the rocks.

And since I've already gone on far longer than you're probably interested, let me leave you with one final option: bacteria. No, hear me out. I always save the weirdest for last...

Your tunnelers have a symbiotic relationship with a type of bacteria that requires specific minerals to reproduce or as a necessary part of their normal metabolism. As waste product they leave behind a compound that either has nutritional value or acts as a drug to the tunnelers. The bacteria grow through the rock following veins of their mineral, cracking the rocks to something the consistency of chalk as they convert the bulk of this mineral to biomass. The tunnelers come along and slurp up the mess, eating the biomass or getting a good buzz, and incidentally spreading the bacteria to new veins in the uncovered surfaces.

Not the answer you're looking for? Browse other questions tagged creature-design geology .

6
Biological and ecological considerations for a giant worm
13
Could humans dig out a 20km tunnel through quartzite by hand?
61
Why is this creature afraid of water but not of body or plant fluids?
7
Help me Explain this Alien's Traits
11
Could a deep ocean creature use some kind of bacteria in its body as a way to generate oxygen?
5
Lizard-like creatures "swimming" through the sand?
7
What would Mimics be like without human influence?
6
Feasibility of leaf scorpions
2
Could this rock-badger exist?