Desert-Adapted Humans: Differences between Normal Human and one Highly Adapted for a Desert

I am writing a story about a scenario where about 12,000 Americans are dropped onto an alien planet, specifically in a desert region of the aforementioned planet. Because of handwavium, they all survived and gathered into one place, called New Washington. By way of magically accelerated evolution, all of them become adapted for desert life within one year, and actually survive it.

I'd like to know any physical differences between these Desert humans and regular ones. However, rules for the evolution are as follows:

The planet's system is this:

What would these humans look like after the evolution is complete? 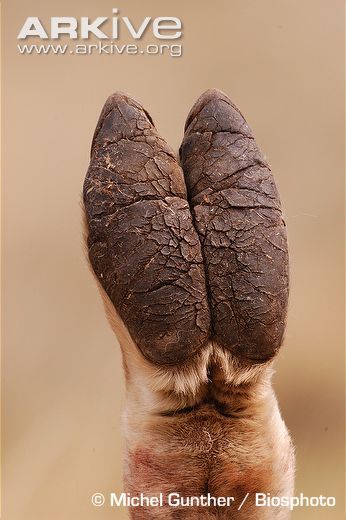 That one belongs to a camel, but a similar thing on humans is feasible to shield from the hot sand, spread the weight and prevent sinking.

Nostrils that close themselves against the sand/dust as per camelids and humans to a small extent.

Hyperkeratosis, ie. skin that's thick and wrinkly (there are no doubt other options with fur/scales etc.). I mention this, because I'm discarding the idea of a hump as unaesthetically pleasing and a thick keratin layer which can hold water in a similar way to that way in which elephant's skin retains it would act as a great substitute.

Blood that can stand a great range of osmotic potentials - what I mean by this is it should be able to be nice and watery when conditions permit drinking, but be able to cope with lots of water reduction in it's makeup. The same would go for many organs, but most especially the industrial-level rugged kidneys that rid the blood of processed waste.

The ability/reflex to divert blood-flow towards and away from different parts of the body to minimize overheating in the sun (and over-cooling at night).

Rather than the big flappy ears of elephants, or over-sweating, I'd suggest forming a habit that kangaroos have, they lick the inside of their wrists over the radial artery (and associated veins which I can't remember what they're called) to cool the blood.

The brain-case. This is always going to be vulnerable to the sun, so how about a massive head of sun-absorbing hair - be it dark or camel's sand coloured barnet, it'll put a halt to hot-hotheadedness.

Huge sexy eyelashes which interlace when the eyes are open, forming a barrier to sand.

What some of the smaller animals have done is adopt a nocturnal lifestyle or a crepuscular one like the Fennec fox, which'll dig a lair under dunes at the desert edge or dune-islands of relative moisture which are frozen in place by various poverty grasses and other shallow rooted plants. There's just enough moisture to maintain the shape of the landscape for a season or so.

Not the answer you're looking for? Browse other questions tagged planets evolution humans or ask your own question.

8
A planet ringed by stars
38
Can a planet survive a supernova?
14
Orbiting one star in a binary system: what are the effects of the second star on the planet?
12
Could life evolve in the degenerate era of the universe?
2
Evolutionary differences betweeen space-dwelling and planet-dwelling humans?
0
Can we manipulate the Sun, gas and ice giants to create more habitable planets and extend the life of our sun?
13
Can two stars orbit each other but each have their own planets in stable orbits?