How would draw weight, range, and power of a bow be affected by a magic bowstring?

So in my world, there are magical artifacts and weaponry.

One of which is the bow. It's bent like a strung bow, but without a string. And when you grab where the string would be and pull back an energy-based string and arrow appear and you can draw back the string and release to fire, and the string disappears but the arrow launches.

The string isn't actually made of a physical substance and you don't bend the bow any farther back when you draw it back, it just extends the string.

This provides the advantage of not needing ammo, or needing much strength to "draw back" the bow, but is there a plausible explanation for it to still produce considerable power, while still keeping the latter advantage to some extent?

One thing to note, my magic isn't entirely hand-wave-y, it is energy-based. And any resulting affects from it still follow physics. 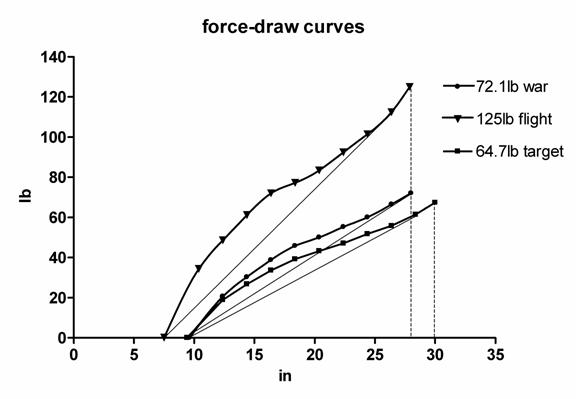 This curve plots the amount of force you have to apply as a function of the distance you draw, for a few bows. For instance, according to this chart, if you want to draw the 125lb flight bow back 15 inches, you will need to apply 60lb of force. The area under the curve is the maximum amount of energy that can go into your arrow. If the force is higher, or if the draw distance is longer, then you will get a faster arrow.

In practice, not all of the energy of your draw goes into the arrow. Most modern bows are about 80% efficient, meaning 20% of the energy goes into moving the bow or the string, or is dissipated as noise and heat.

Your magic bow could do better than a modern bow, while still respecting physics, by increasing that efficiency. So it could at most put in 25% more energy than a standard bow - assuming it has the same draw weight and the same force-draw curve as the standard bow.

We can imagine that your magic bowstring is perfectly efficient - every bit of energy you put in comes out. To attain almost 100% efficiency it is necessary only that the bow doesn't significantly move, which seems feasible with a firm hand.

There is one other thing your magic bow could do. Compound bows have a different draw curve. The force increases rapidly to a set level, and remains at that level for the rest of the draw, until the very end of the draw when it eases off a little so you can hold it there. The force-draw curve for a compound bow looks like this: 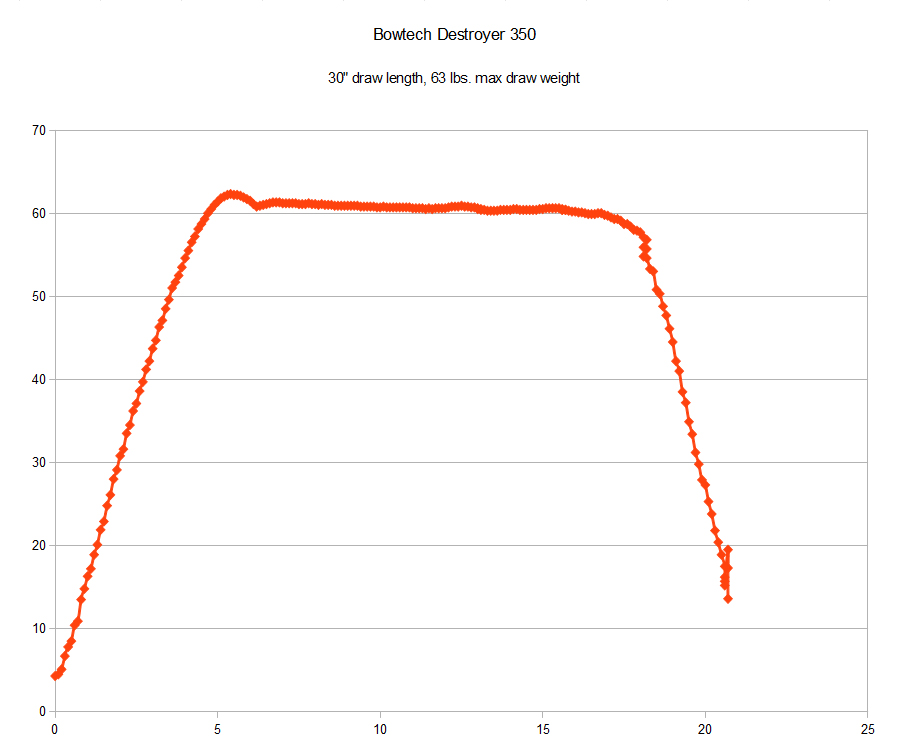 This is useful because the force the user needs to apply is consistently at the maximum force they can draw, instead of starting off easy and getting harder only at the end. That increases the area under the curve, and therefore the energy of the arrow.

If your magic bow had a draw-force curve that looks like that, it could put about twice as much energy into the arrow as a non-compound bow. (Most fantasy bows are non-compound bows; compound bows are the complicated looking ones with pulleys.)

The Draw/Force curve of a normal bow has a steep ramp requiring a great deal of force to achieve reasonable foot-poundage (or equivalent newtons force): 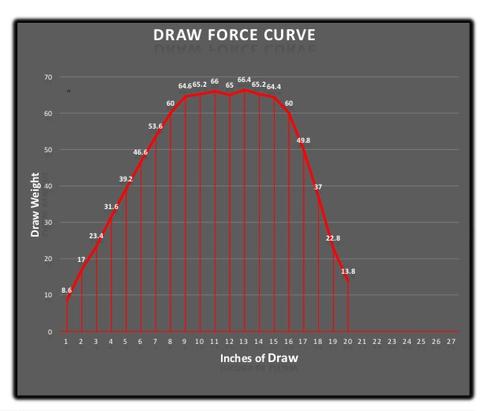 You'll observe that the "normal" bow in question peaks at about 66 pounds draw weight. The total force imparted to the arrow is derived from the area under the curve.

The upshot of this is that if you have a flatter curve with less draw weight, but a longer draw, you can achieve the same total force imparted to the arrow. A 20 inch draw at 33 pounds even-weighting across the length of the draw will produce greater area under the curve than an 11 inch draw at 66 pounds - and greater energy imparted to the arrow.

Modify this as you will to fit the capabilities of the drawer: strength, arm-span. A gangling, long armed weakling can draw further but at a lower weighting - but produce the same total force as a muscled dwarfen character.

Most of a bow's power comes from the flexing of the wood. What you have is a slingshot. Generally, the strength you pull back with is the strength the arrow is launched.

If your wood is completely stiff, your magical string will need to be elastic. Elastic sucks, and the bending of the bow actually helps decrease the raw strength you need to put into drawing the bow.

To make your bow work, I believe that the magical string should be able to vary its elasticity. Increase elasticity while drawing back, and at the moment of loosing the arrow, decrease the elasticity. That way, the "snapback" will be much harder than pulling.

Imagine if you had two rubberbands the same size but different thickness. The thin rubberband is easier to pull, and if you pull it really far and the band suddenly became the thick one pulled to the same distance, the effort to maintain the pull will be much greater, right? Same concept here.

The Power of Ensorcellment
As we know from history, not all bows are the same. Some are designed for distance and power, like the English longbow, others for hunting or use while riding. Your magical bowyers will apply their thaumology for the same range of purposes.

For hunting, you just don't need a massively overpowered siege engine of a bow. Unless your quarry is a brontotherium! The ensorcellment used for a smaller bow will be quite springy: easy to pull, not a whole lot of energy output. Making this kind of bow is fairly easy, as the energy storage curve is minimal and requires fewer safeguards.

For a great war bow, you are looking for something more akin to an overpowered siege engine of a weapon! Here the ensorcellment will be rather more resistant, but not excessively so. The energy storage curve applied here is different: in stead of the easier to manage straight 1:1 ratio of the hunting bow, this curve is more complex. Initially, the curve is easy, but as you pull harder, the string's tension increases more rapidly, perhaps 1:3 or 1:5. This means that when your archer yanks back on the string, the string's enchantment multiplies the force many more times than the other bow.

But now pluck a string and push on the whammy bar at the same time! Now in stead of a D, you'll hear the pitch rise considerably as the strings tighten. The energy stored by the thaumic bow string is actually increased considerably without much of an increase in pulling on the string. Higher amounts of stored energy mean faster, longer, more powerful arrow flight.

Just be careful the string doesn't pull your hand into an extra dimension!

Not the answer you're looking for? Browse other questions tagged magic weapons energy .

15
How would weapons and armour be affected if metal weight was negligible?
13
How would magic work in a modern army
27
How do I use weird bouncing magic to power my society?
33
Would 'magic' muskets be a significant advantage over actual muskets?
3
Realistic bow weight and penetration for a humanoid of large size and strength
11
Could the development of a body armour that completely stop any small arms' fire make a civilization go back to medieval-style combat?
31
Aerial combat: winged humans
10
How much of an advantage in medieval-style combat would it be to have four arms with pivoting shoulders?
4
What would be the strongest "realistic" bow draw weight with ubertech?
4
How can this magic system be used most effectively/creatively?