How smooth would Earth's oceans be if quickly frozen?

I am writing a story in which the average temperature of Earth falls by 150C (270F) over the course of five months. That should be cold enough that, according to a source from Kurzgesagt, the ice caps would meet at the Equator.

With such a process taking place, when the caps connect, how smooth would the frozen oceans be? Would they become smooth ice plains, or rough jagged ice? Or would we have uneven ice but covered in evened out snow?

I spent two years in Finland, where the Gulf of Bothnia freezes almost every winter

In other words, the Earth already has an answer for you. 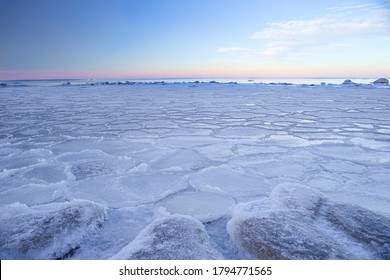 Both years I was in Finland the Gulf of Bothnia froze. It does pretty much every year. Regular trucking lanes are set up when it freezes between Finland and Sweden. It freezes a hair faster than in your case — if I recall, in about a 2-month period.

But that event explains what would happen to the oceans... to a degree.

Salinity isn't as even as you think One problem is that saline not only changes density vertically, it has moderate differences horizontally. This means your ice will freeze at different rates in different areas. This will contribute to...

Platelets due to water motion Since the water is moving beneath the ice, the ice will initially be in the form of platelets (you can see them in the image above). However, the platelets don't last forever for two reasons...

Photons are hot No matter how cold the air gets, those pesky photons still carry a wallop. Yes, you can get the surface cold enough that even photons can't cause any melting, but in the conditions you describe, there would be a minuscule amount of ice melt (and I really mean "minuscule"), but the result is that over time (SEE BELOW) the ice evens out. But they have help...

Wind is the ultimate sand paper And if the photons don't eventually smooth it out, the wind will. Wind and every grain of anything (including other ice crystals) blowing across the surface. I can only imagine the kind of wind that would build up out in the oceanic wastes if there wasn't soft, gooey water to absorb some of its energy. I think the world would see some terrific wind, way beyond what we ever see today. But wait! There's more!

And then there's the snow Falling snow will also cause the ice to smooth out. Now, you're no longer putting water into the air through evaporation, but the process of assublimation puts it into the air just as quickly. But to get real snow in the way you experience it today is unlikely. It's more likely that you'll get fine, crystalline powder or hail. I'm sure you know the difference between "wet snow" and "dry snow?" Yeah, only dry snow.

Now, all this suggests that you'd see choppy, ugly formations initially but, over time (and not that long, months or a year) you'd see the ice smooth out. Except...

But across large areas you'll have hills-to-mountains worth of ice. An every time one of those 8+ earthquakes happens — especially if it's on the coast where it can create an under-the-ice tsunami, you're going to get a lot of stuff breaking up. In fact, one of those tsunamis could rip up whole lengths of the ocean.

Two more things to think about... "sea level" isn't the same world-wide. This is a wonderful complexity.

Should the ice get thick enough, the atmospheric pressure differences will become secondary, even tertiary effects. But the fact remains that there is a difference between the different chunks of oceans. Those differences could contribute to the existence of oceanic ridges, ice ridges on the surface where these transitions occur. Maybe the wind would smooth these out, too, but the existence of the different regions would lead to more ice breaking up.

An then there's the moon. If there's any liquid water at all, it's going to have tidal force. Like the pressure differences mentioned above, the thicker the ice, the less this is an issue... but they would also lead to the ocean never being completely smooth — unless you freeze it all.

While I believe there would be large swaths of very smooth ice, notably where the ocean is more shallow, I also believe that in the areas experiencing earthquakes it will be very broken up and whenever an under-the-ice tsunami is the result of an earthquake you'll see huge ripples of broken-up ice. The world would still be very dynamic.

If you look at the Arctic ocean, it has large areas of smooth ice and places where the ice has jammed together breaking it up and making "hills" of ice. These hills are not large by terrestrial standards, but for those who were attempting to travel by foot to the North Pole, they were a significant barrier (and even worse for those with machines). Wind pushes ice around and ice doesn't have internal strength. So, ice opens up on one side and jams together on the other side.

See the bottom of https://www.pmel.noaa.gov/arctic-zone/essay_wadhams.html Source contains more information, so as links for even more information and photos of all kinds of ice.

Here is the cite about rough water (public domain)

How ice forms in rough water.

If the initial ice formation occurs in rough water, for instance at the extreme ice edge in rough seas such as the Greenland or Bering Seas, then the high energy and turbulence in the wave field maintains the new ice as a dense suspension of frazil, rather than forming nilas. This suspension undergoes cyclic compression because of the particle orbits in the wave field, and during the compression phase the crystals can freeze together to form small coherent cakes of slush which grow larger by accretion from the frazil ice and more solid through continued freezing between the crystals. This becomes known as pancake ice because collisions between the cakes pump frazil ice suspension onto the edges of the cakes, then the water drains away to leave a raised rim of ice which gives each cake the appearance of a pancake. At the ice edge the pancakes are only a few cm in diameter, but they gradually grow in diameter and thickness with increasing distance from the ice edge, until they may reach 3-5 m diameter and 50-70 cm thickness. The surrounding frazil continues to grow and supply material to the growing pancakes.

At greater distances inside the ice edge, where the wave field is calmed, the pancakes may begin to freeze together in groups and eventually coalesce to form first large floes, then finally a continuous sheet of first-year ice known as consolidated pancake ice. Such ice has a different bottom morphology from normal sea ice. The pancakes at the time of consolidation are jumbled together and rafted over one another, and freeze together in this way with the frazil acting as "glue". The result is a very rough, jagged bottom, with rafted cakes doubling or tripling the normal ice thickness, and with the edges of pancakes protruding upwards to give a surface topography resembling a "stony field". The rough bottom is an excellent substrate for algal growth and a refuge for krill. The thin ice permits much light to penetrate, and the result is a fertile winter ice ecosystem.

Look at icecaps already existing, what you will get is not much different from that since in both cases ice will be moving and flowing, resulting in similar surface features. 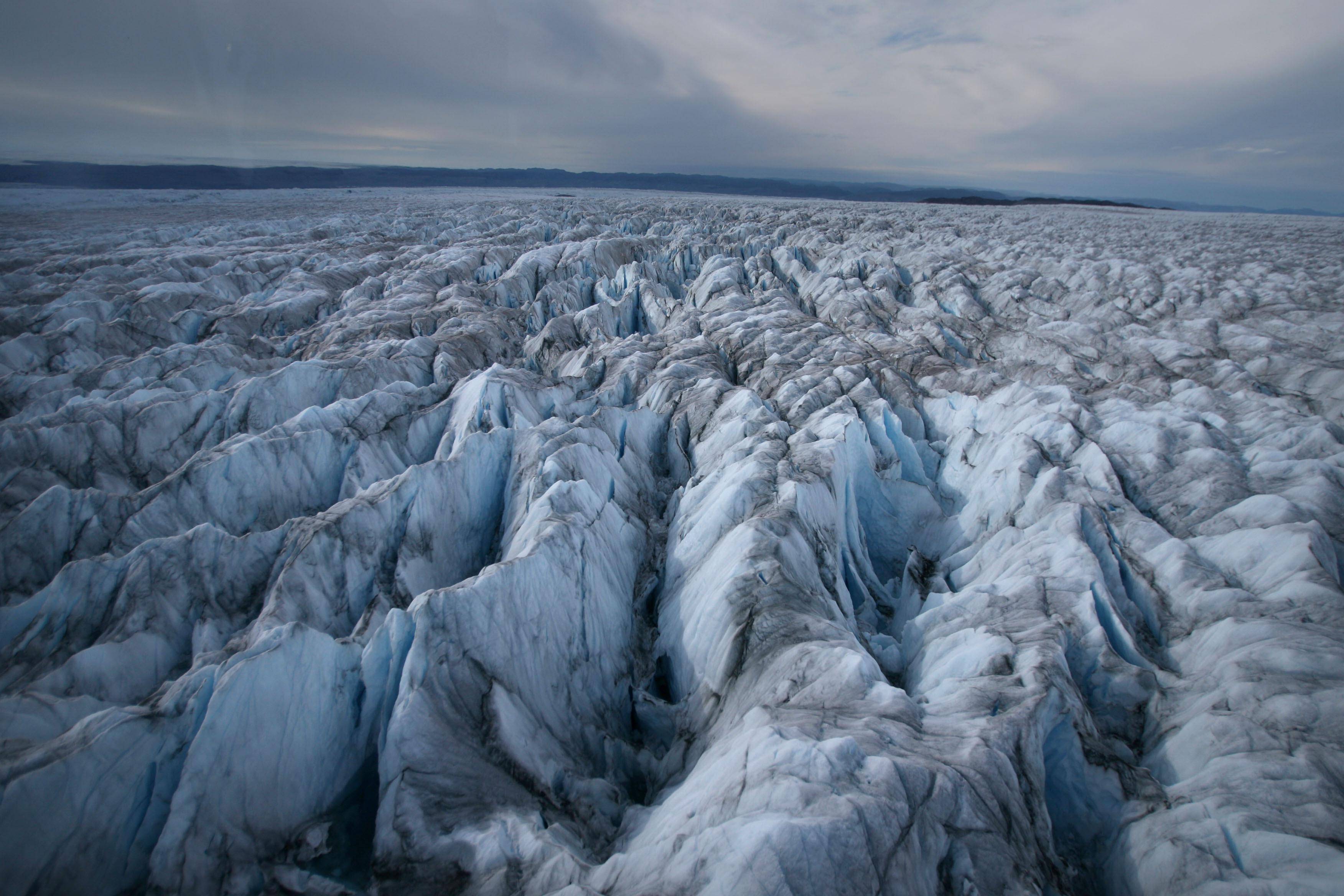 Where it will be snowing the snow will smooth things out, same effect will be achieved by winds.

Not the answer you're looking for? Browse other questions tagged science-based reality-check geography .

6
Geography and Appearance of an nitrogen/ammonia planet
16
How could an Earth-like planet develop huge pinkish-purple forests on ocean surfaces?
21
What would it take for an island to sink and rise yearly and naturally
6
If Earth's Oceans Were as Deep as Europa's
24
How To Make Earth's Oceans as Brackish as Lyr's
5
Plausible design/size of flying cities?
5
TImeline of Rogue Earth
3
Which countries/organizations are most likely to ensure survival on a freezing Earth?
1
Forest fires for heat
1
how do you freeze an ocean to get a desert planet?