How to plausibly justify a species growing mineral-based protrusions that resemble horns or spikes?

I'm currently designing a sapient species for a science fantasy setting that's supposed to be a herbivorous, physically resilient, and bulky sort. They currently bear some resemblance to boars or minotaurs for comparison, but that's currently only the 'foundation' of their design. One thing that characterizes a lot of the species in the setting are their distinct evolutionary traits that inform their character designs, such as one species being able to cultivate mushrooms on themselves, or another with colour-changing sail-like ears for social communication.

I've been experimenting with the concept of the current species being able to grow mineral deposits on themselves as both natural protection and as a form of blunt weaponry, but I'm unsure about the specifics of how to justify this trait without resorting to an excessive amount of handwaving. Of course, the setting is still a science-fantasy blend, so as long as it can be justified to a decent enough degree without having to invent an excessively convoluted setup, mineral or environment, I'll be happy with it.

There's a few ways that I could go about it - such as making it so that the horn itself is actually still just a normal horn (if a little rocky looking), and the crystals grow on top, I could have the horn itself be made entirely out of crystal that's grown on the body somehow, or have it be part of the species itself. I'm reluctant to do something more exotic like, "this species' bones are made out of rock!" mostly because I wouldn't have all of the requisite knowledge to continually justify it or integrate it into the setting or the species' culture as smoothly as I would like. Gastroliths turned up in my research as well, and while most species obviously can't integrate stone and minerals in their body from digestion, that's a potential 'in' for justifying how it works biologically.

There's a few other things that come to mind on this topic, like the formation of Stalagmites and Stalactites, but the problem with those is that they would take an excessive amount of time, nor do they really work on biological species, to the extent in which an entire horn could form. Things that could form 'actual' gemstones like rubies are also highly improbable or impossible without significant intervention as those are tied to geological processes as a whole. Ideally, I'd like for the crystals to happen 'somewhat quickly', and to be part of the species' natural evolution in their original environment instead of being an artificial addition in modern society. It would also be nice if the formed crystals were a little sparkly or glittery, and of course, the formed protrusions would have to be resilient enough to actually serve their purpose as an offensive and defensive tool in the species' arsenal.

I'd appreciate your suggestions and ideas on this, as mineralogy is a field I'm inexperienced in, and searching for more information on fictional takes on mineral/biological combinations has been rather difficult.

Most mammals already do this.

We call them teeth

They're just not growing where you want them to grow, but that's because in most mammalian evolution, the only place they made sense was near or inside a mouth. But is a tusk or horn plausible? More than you might think! Below is an image (taken from that article, click for larger image) of a mountain lion with teeth growing out the back of its head. 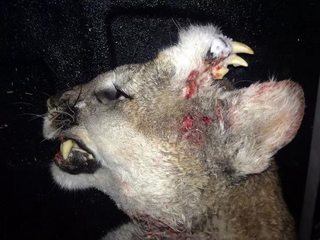 But we also see this in normal life. The elephant tusks mentioned in a comment by @jamesqf are one, a narwhal's tusk is another.

A word about realism

But why don't we generally see them everywhere? Well, other than humans would all look like orcs and Mother Nature has a better-than-average sense of aesthetics, mineral is more brittle than the fibrous keratin-based or bone-based horns and antlers you usually see. So, like everything, there's some pros and cons you need to consider as you develop your creatures. This is good! It'll make them feel more realistic.

The males collect and add their mineral horns themselves, because it is attractive. 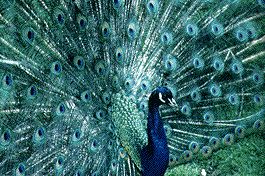 Male peacocks - and many other bird species too - have spectacular 'tails' (or, more exactly, trains) or other extravagantly developed and brightly colored structures. A peacock could inseminate a female just as well without his remarkable tail, and in that sense it is a secondary, not a primary, sexual organ. The peacock's tail almost certainly reduces the male's survival: the tail reduces maneuverability, powers of flight, and makes the bird more conspicuous; its growth must also impose an energetic cost...

A structure produced by sexual selection in males exists not because of the struggle for existence, but because it gives the males that possess it an advantage over other males in the competition for mates.

Your males have biologic horns and protuberances, and historically males with large and spectacular ornamentation of this sort were considered better mates. Some males figured out how to artificially enlarge and augment their horns and spikes by adding things they found - colorful rocks, jewels, and the like. It is possible for them to loosen and remove a spike and put a jewel in its place. I think of the weaverbirds, among which males with long tails are considered attractive by females. When biologists attached the tail of a dead bird to a live one, doubling its length, it got all the mates.

The result is body modification in pursuit of attractiveness. The horns and spikes your creatures have are placed there. Some are passed down in families, or might be taken from a defeated foe. These mineral spikes signify wealth, family and interest in being attractive on the part of the ornamented male.

Humans are no strangers to this sort of thing.

As Pelinore in the comments so eloquently put, normal real life horns (or shells) is already a growing mineral-based protrusion that can resemble horns or spikes.

Or if the question is "what is a reason a sapient species would choose to grow protrusions that can resemble horns or spikes" Then I guess the answer would be the same reason animals do, to fight and hunt.

Alternatively: if the question is why the need to grow them back at a surprisingly high speed than my answer would be: The mineral(calcium equivalent) this species contains is weaker then calcium and needs to grow back fast in the eventuality a horn(weapon/tool) was damaged or lost.

I'm reluctant to do something more exotic like, "this species' bones are made out of rock!" mostly because I wouldn't have all of the requisite knowledge to continually justify it or integrate it into the setting or the species' culture as smoothly as I would like.

This is actually what animals today already do. Skeletal hard parts are typically made of some kind of biomineral that the animal accumulates and secretes into its skeleton. Indeed, in some cases, like early vertebrates, one of the reasons why it is believed that bony skeletons were developed was as a way to store calcium and phosphorus ions for metabolic purposes (among other things, it buffers blood pH).

More specifically, vertebrate bone is composed of about 60% hydroxylapatite, the shells of many marine invertebrates are either calcite (e.g., clams, snails) or have a layer of calcium carbonate to strengthen the shell (most crustaceans). Diatoms, radiolarians, and some sponges use silica to build their shells, and apparently organisms in the past did enough of this that chert rarely forms under natural conditions anymore (because silica-using microorganisms use it all up). All of these materials exist in nature as crystalline minerals outside of living things.

More exotically, shrews and rodents incorporate iron compounds into their teeth, and polychaete worms use magnesium and zinc to construct their hard parts.

So really, all you would need is some hand-wavy justification as to how and why a species incorporates this mineral as part of its metabolism and life history. Bodily support is one option, as is defense or storage of minerals for laying eggs, maintaining blood pH, etc. External shells appear to be easier to develop than internal ones, because all it requires is secreting mineral plaques onto the outer surface of the body. As long as the mineral isn't something exceedingly rare, inert, or radioactive, there should be a chemical pathway to accomplish this.

From there natural selection would shape the distribution of the mineral as needed. This is how we went from boxy armored fish with a cartilage skeleton to fish with no mineralized exoskeleton but a completely ossified endoskeleton and teeth.

Though, this in turn depends on how common the mineral is in the environment and what your species' metabolism is. For example, no Earth animal is probably ever going to have a skeleton made out of platinum, simply because platinum isn't very common and no organism has a metabolism that requires large accumulations of it.

Pachycephalosaurus also had a blunt bony weapon: the top of their heads. Their cranium could be 25cm thick at the top (~10 inches) and their backbone was made to absorb impact from that direction, so scientists believe those critters did a lot of headbutting.

If you can't figure out how a single species would go about doing this naturally, you have two alternatives.

For example, the critter is some sort of filter feeder that while feeding pulls dust particles from the air. These metal/mineral particles pass through the critters digestive system and come out the other end as a sticky pile of $%&*. The critter moves the waste out of the way to the edges of the horny tunnel (haha) systems where it dries and hardens into a composite rocklike material. Over time, the dried wastes build up and the stony horns appear to grow. There could be a pronounced growth spurt of the horns during dry dusty times or during extensive stays in mines etc.

Whenever I see a question like this I always think about diatoms. Diatoms are photosynthetic algae, they have a carbon based water mediated metabolism, like all "life as we know it", but instead of using starch or calcium compounds to build rigid structures like plants and animals respectively they use silica i.e. Quartz to create their exoskeletons. Silica is abundant in nature and is taken up by most plants and in some cases, most particularly grasses is found in their tissues in forms that could be digested with the proper adaptations.

Not the answer you're looking for? Browse other questions tagged science-fiction evolution fauna geology species .

16
Could it be possible to be near-blind in daylight yet see perfectly at night?
5
Biological explanation of age stopping in near-human aliens
10
How to justify evolution of a sapient hermaphrodite species
9
Weapons for bioengineered aliens
16
To justify mortal combat
29
Wasp hives in a walking corpse. Why would wasps do this?
9
How would a life form conform their anatomy to fit whatever they wear?
6
Is it plausible for a being to possess a singular halo-shaped 'horn', while other members of the species possess two 'regular horns'?
6
Interacting with a sapient swarm intelligence