Assuming that a terrorist organization or rogue state has the capability of getting crude rockets up to orbit, could they trigger Kessler syndrome by detonating simple fragmentation warheads in the paths of orbiting satellites?

This seems like a good way for a single organization to hold the entire world hostage. Put at risk the entire low orbit infrastructure unless their demands are met.

Yes, if there are enough objects in low-earth orbit to cascade into a Kessler syndrome type scenario, then it's plausible.

However, it's reasonable to suppose that, if the world ever had enough low-orbit infrastructure to present such a scenario, governments would impose strict monitoring and intervention on all skybound objects to protect the infrastructure. That could include mandatory inspection and authorization of all objects being launched to space, and a network of satellites dedicated to monitoring objects approaching orbit, armed with some kind of interceptor to neutralize unauthorized objects -- it maybe could be done with wide, high-powered lasers, or heavy nets with propulsion on the edges to physically catch or redirect the objects.

Under those conditions, terrorists would have to do some preparation for the attack. The hard thing is to make a threat so that you can make demands, but not follow through with it if you don't absolutely have to. You have to make it clear that you're capable of triggering Kessler, without telling "how" you'll do it, and without actually doing it, so that nobody can stop you.

Here's an example of how this might be done with some misdirection... Say the terrorist organization has a few people working in a government agency related to regulating space objects. They make the false but credible claim that they've rigged several satellites with explosives. The world governments immediately send squads, and cause satellites to begin scanning one another, to check for tampering, all while negotiating with the terrorists. The truth is that the terrorists have hacked into a few satellites which have built-in propulsion. Midway through the negotiations, the government realizes there are no bombs, and calls the bluff, saying that there's no deal. As soon as this happens, and while the satellites are still being monitored carefully, the terrorists redirect several of them into colliding orbits. The government is now aware of the threat, aware of the terrorist's demands, pressed for time, and caught unprepared for the nature of the threat, because their resources are all devoted to another task. The governments pay up, and the terrorists put the satellites back on course.

Note that they do not need the ability to put something in orbit to carry out this threat. All they need is to be able to get a substantial warhead high enough up with very good accuracy.

USSR tried to place nuclear mines in space by the end of the 80's. Those were actually part of a weapons platform called Polyus - which my completely broken and minimalistic Russian tells me means "pole" such as in "north pole", but makes me wish to sing Poluyshka Polye all day long.

You can read all about that platform here. It had ballistic guns and lasers, as well as the aforementioned mines. If those mines ever went off, you could have a serious case o Kessler. Fortunately the whole thing bellyflopped on launch and now lies in the South Pacific. 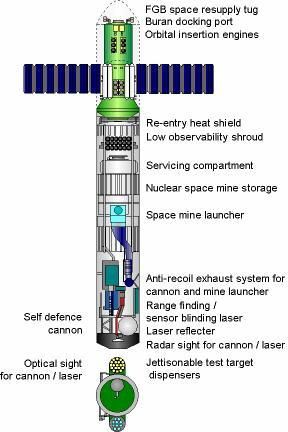 If a rogue state ever got its hands on a functional, dismantled Polyus, and they had access to launching platforms on developing countries (I am looking at Alcantara base in Brazil and another one in the Guianas), yeah, they could totally wreak some havoc.

Not the answer you're looking for? Browse other questions tagged space orbital-mechanics terrorism .