How do paved roads affect the wear and tear of iron horseshoed cavalry?

A relatively young and ambitious ruler has decided to build roads across the domain as part of a large public works project. The dirt tracks and existing gravel roads are to be paved with local stone where possible and fired clay bricks in places where transporting stone is prohibitively expensive. These roads are in relatively flat terrain linking three large cities on the borders to the capital which is in a central location within the realm.

The three cities have large but largely immobile forces of foot infantry anchoring the borders, while the ruler's forces in the capital are mobile cavalry and elite well equipped infantry units small enough to be transported in horsecarts. The sluggish nature of the large border city infantry hosts makes it hard for any of the three cities and their lords to rebel and march against the capital, where the more mobile capital army can harass them to death in-transit. At the same time the equine-centric army is quick in reinforcing any border city in case of external invasion.

How would long term transit on solid paved roads affect the horseshoes of this vital cavalry heavy contingent? Stone or brick is harder than gravel or dirt, with allows wheels to go faster which is the allure of such infrastructure. If the new roads also increased or decreased wear on the horseshoes or the mounts themselves, it would likely have a large impact on the feasibility of consecutive deployments of the capital army.

The type of road being laid is not the object of the question. I know many of the people on stack exchange are super enthusiastic about road laying, but the type of road has been set and will not be changed to be the perfect dream infrastructure because it doesn't fit the story.

Your horse units might shift to using boots with full hoof support and coverage rather than use what might be thought of as just the traditional iron band shoe.

Here is a picture of a booted horse: 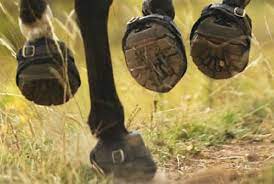 This is what I have learned having a team of semi-retired draft horses (percherons) that we pull with. We "compete" (more like participate) in carriage/wagon driving and in the fall we pull wagons for hay rides and apple picking.

First, it is possible that your horses will not require shoes at all particularly horses that are bred for soundness rather than other factors and can be driven on dry terrain, even a road.

After Halloween, we stop shoeing our horses until the spring. This helps to keep their hooves strong and saves a bit of money with the farrier. Horses can become dependent on shoes and we typically shift to boots to prevent lameness before allowing them to go barefoot. Horses will still require a regular visit from the farrier to keep them sound. Our horses get their hooves trimmed and adjusted every four to six weeks year round.

While it is technically true that horses can be driven on roads without shoes, this can be very hard on them and I would avoid driving on a super hard surface without shoes and I have heavy drafts bread for soundness. If your unit's horses develop hoof bruising or cracking in the field and end up lame then your unit is going to be stuck at some random location.

Now, on the flip side, shoes on pavement can be slippery and there are modern composite shoes that can help address that. What we do however is the more traditional fix of using studded shoes. We also use "boots" rather than shoes if our horses show any sign of tenderness.

One thing to note, year round, the farrier comes to trim a horse to keep it sound, not typically because their shoes are worn, though the longer you go between visits, the more nail heads wear and shoes will loosen and might even be cast off.

A modern farrier visit (at least for us) is about an hour a horse if they are getting new shoes. It is considerably faster in the winter when they are just getting trimmed up. Our farrier comes with pre-made shoes that are adjusted on site to our horse. In the end, I imagine that a farrier or two might be permanently attached to a unit, even when they are away from the keep.

How would long term transit on solid paved roads affect the horseshoes of this vital cavalry heavy contingent?

The unit might require a farrier/smithy/vet detachment particularly for longer term deployment.

Nails of shoes worn on very hard surfaces will wear down and likely result in more frequent attention from the farrier. Maybe every 4 weeks.

To ensure traction on hard surfaces, shoes will likely be augmented with road studs, though without modern materials these studs are likely to be just hardened nails with larger heads.

If horses were still becoming lame, farriers might switch to boots with a full hoof plate rather than shoes. Boots provide support and protection typically with a full plate rather than what might be thought of as the traditional iron band shoe. They can also allow for more participation of the horse's natural shock absorbers.

Wide spread use of boots might also accelerate the search for/discovery of padding such as rubber between the hoof and boot for shock reduction and for frog support.

This is just my best guess. Best of luck with your writing.

Not the answer you're looking for? Browse other questions tagged cavalry roads iron horseshoes or ask your own question.