What POD Would I Need to Make the European "Flag Samurais" a Reality? [closed]

In honor of the much-delayed Tokyo Olympics, Japanese artists (I've never found their names) have drawn the flags of all the nations personified as anime warriors. For this question, let's focus on the following nations:

In our timeline, the kinds of clothing and the types of weapons and armors presented in the images are distinctively Japanese. But in an alternate history timeline, they are common among all the imperial, royal and noble ranks of medieval Europe (5-15th centuries AD). Which raises the question—what point of departure would I need to make this scenario a reality?

Shintoism is too similar to pagan worship to convince people to switch. If you change the names but not the idea people will stick to what they know. But Buddhism might just be different enough for people to consider worshipping it. It should be about as strange to pagans as Christianity and therefore be just as viable. Buddhism has many trappings of the east, and so people might decide that to be better Buddhists they should try to look like the original Buddhists. Christianity and Buddhism also share compassion for the poor, so Justinian would adopt it for roughly the same reasons.

Japan then embraces Buddhism since it is a world religion that replaces Christianity and puts their culture into it to propagate it. Tibetan monks now train with katanas and wear simple non silk kimonos, paid for by Japan. Japan sells these at cut rate to local worshippers, because they sell it at ten times the rate to Europe. Japan puts key Buddhist sites on Japan or in its sphere of influences to get pilgrims, which means even more money.

By the 5th century this garb is religious, and not wearing it calls into question your worth as a Buddhist. Therefore all nobles wear it. If they need to wear armor then they fashion the armor to look like Japanese wooden armor or follow Japanese style.

Somehow, medieval Europe makes contact with medieval Japan. Since it's so hard to get there, and seen as exotic, everyone who's anyone wants to dress like this.

Yes, such fads have been a thing, historically speaking.

Not quite sure why it would last that long, though.

Some time in the 18th century for modern day.

In the 18 century, Dutch technological texts let a few elites in Japan’s military government foresee what we know now: Japan should not fall behind technologically, and should try to lead if possible. They begin founding large science laboratories, and promote international research, as long as it happens in Japan.

In roughly the 19th century, one of the emperors puts cultural practices in place to be accepting and agreeable to foreigners. This includes adopting foreign customs, but expecting foreigners to do the same for your customs. This makes it easier to integrate other cultures and makes other cultures less likely to resist getting take over entirely, since they won’t lose everything.

The 1850s trade agreements with the USA and UK and others let Japan leverage trade for research agreements to further solidify its technological supremacy.

In the ruins of World War One in 1910s the Japanese put all their effort into stealing researchers from Europe using their in destroyed cities and labs as a way to entice them to come over.

Step five Japan says No to Hitler and steal scientists

Due to being a more accepting society in 1930s Japan doesn’t join with Germany, but still expands its influence in Asia. Effectively basically the same since German Japanese collaboration during the war was pretty sparse. However, this gives the Japanese access to fleeing Jewish German scientists.

In 1941 Japan doesn’t attack the us and lets them attack Germany instead.

In the 1940s with all the stolen scientists Japan works on efficient energy generation and discovers nuclear fission. This gives them independence from oil to an extent and allows for the creation of advanced weapons.

No later than 1950, Japan uses their advanced technology, cultural pliability, and in worst case scenario nuclear weaponry to integrate the entire world into satellite states that operate at the will of the emperor. In line with Japanese culture, elites are expected to follow Japanese culture while integrating their own. See above. The conquered are told not to just conform to Japanese culture but to improve it, leading to each nation being distinct like above but obviously Japanese based.

All you need to do is rewrite Japanese culture, change their primary economic focus, make the right choice in every encounter they face, have advanced knowledge of future technologies, and hope that no-one steals the technology first.

Uh, this only works for modern day obviously.

Timing
It won't happen during Late Antiquity, that's for sure. Europeans first visited Japan in the mid 1500s. You'd have to really mess around with the timeline to make that work.

To make the scenario a reality, all you really need is a monarch or military commander with a fantastic sense of visual aesthetics the authority to make that vision a reality and the cash to buy the uniforms.

Take for example the Pontifical Swiss Guard: their dress uniforms are clearly 16th century in inspiration, with their gaily coloured uniforms and halberds and morion helmets, but is entirely modern in conception and execution.

A wealthy potentate with a similar sense of style might recruit from diverse nationalities to form special units within the imperial army and give them spiffy uniforms such as we see depicted! 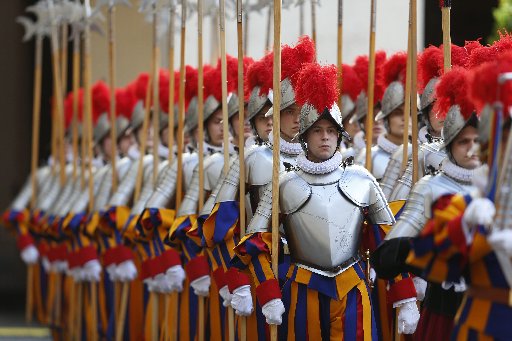 If we assume the only armor is what we see, then that armor is mostly ornamental. But's let's be kind and assume that all that flowing clothing we are seeing is actually Surcoats, and that under that cloth is actually some manner of mail or plate armor.

Even taking this liberty, you can see from the parts of the armor that is has lots of gaps in it making it comparable to 12th century transitional plate armor at best. By the 13th century, European armorers got pretty good at closing up all the gaps in armor making it really hard for an accidental strike to get between the plates.

This armor also has the flaw of being held together by external lacing which is vulnerable to being cut. By the 13th century, European plate armor was fully articulated plates that were riveted directly to one another, or brigandine which riveted plates to a solid sheet of fabric or leather. Both designs were much better than laced plates.

So, if 13th century or later Europeans and Japanese met, it is much more likely that the Japanese would be copying European armor, not the other way around. This means that your POD would likely have to be before the 13th century for that armor to compete anywhere outside of a fashion show. While I could see the kimonos and conical hats taking off as every day attire, the armor aspects, not so much.

The styles of Japanese swords shown are useless against most styles of European armor between the 10-15th century. While there have been many tests showing a katana penetratingly the butted mail often used in Asia, the Europeans almost exclusively used riveted mail. Every penetration test I've seen of a katana vs riveted mail shows that it can not get deep enough to cut through the arming coat. Before the 10th century, partial mail was common enough in Europe that more cutting focused swords like the katana still made since. But, from the 10th century onward, most professional soldiers fought in full-body mail or plate armor that the Katana would be unable to cut through. This change in armor is why knights transitioned from cutting swords like the 8th century Charlemagne sword to the pointer styles of arming swords and long swords you see in the middle-late medieval period.

Keep in mind that the Europeans encountered a comparable styles of swords like the Muslim scimitars in the 11th century, but despite being impressed by the quality of steel, they did not widely adopt the shape because crusader swords were much better at dealing with an armored opponent. This further pushes back your POD to likely have to be before the 10th century for those swords to be practical.

Before the 13th century, pretty much all Medieval European cloth was course, thick, and had relatively low thread counts. Even if Europeans were exposed to this style of Japanese attire, it is unlikely that most people (even many lords) would have access to it since their own textile industry would be unable to reproduce it.

So, for a variety of practical reasons we can already see that adoption is unlikely (but not impossible) at any point in medieval history, but the real reason you would never see this happen is because a lot of what you are seeing simply did not exist for most (if any) of the medieval period.

The elements of Japanese Ō-yoroi style armor did not exist until the 10th century and were not actually common until the 13th century. Furthermore there is a lot of elements of Haraate armor that shown did not exist until the 15th century which rules out Europe getting these styles from Japan before they would have been obsolete in Europe. The older Japanese Tanko style of plate armor was around as early as the 5th century, and I could easily see it influencing the Early Medieval period, but Tanko armor is distinctly not represented in these pictures.

Also, these images show warriors armed with Odachi, a 14th century sword, and Katana, a 15th century sword. Before the 14th century, the Japanese generally used Chinese styles of swords similar to the Dao or Jian. Also, the styles of European swords that had those extra long cruciform cross guards did not emerge until the late 15th century. At most you could interpret these pictures as depicting the type XIIa Longsword (allowing for some artistic license) which emerged in the 13th century.

Also, many of the European styles like the lapels on some of the shirts, and the styles of some of the boots did not exist until the 18th century putting some of these pictures 100% outside of your desired time period.

Not the answer you're looking for? Browse other questions tagged warfare weapons alternate-history culture clothing or ask your own question.

-1
How Would Political and Religious Structures Function in a Buddhist Medieval Europe?

32
What would need to happen to history to make a 21st century steampunk world?
16
What would make good clothing for an underwater species?
9
What is the smallest change I can make to history to allow the French Empire not to fall?
8
What materials would we need to have melee weapons and body armor become the norm?
10
On a frozen world, what would be the thinnest, warmest materials to make clothing from?
7
What Point(s) of Departure Would the Native Americans Need to Sail Across the Atlantic and Colonize Europe?
21
What point(s) of departure would I need for space colonization to become a common reality by 2020?
4
What POD Would I Need For Earth's Lost Worlds to Exist Today?
8
What would make Orcs wear less armor?