Would a "Hunting Horn" be feasible in a realistic world? 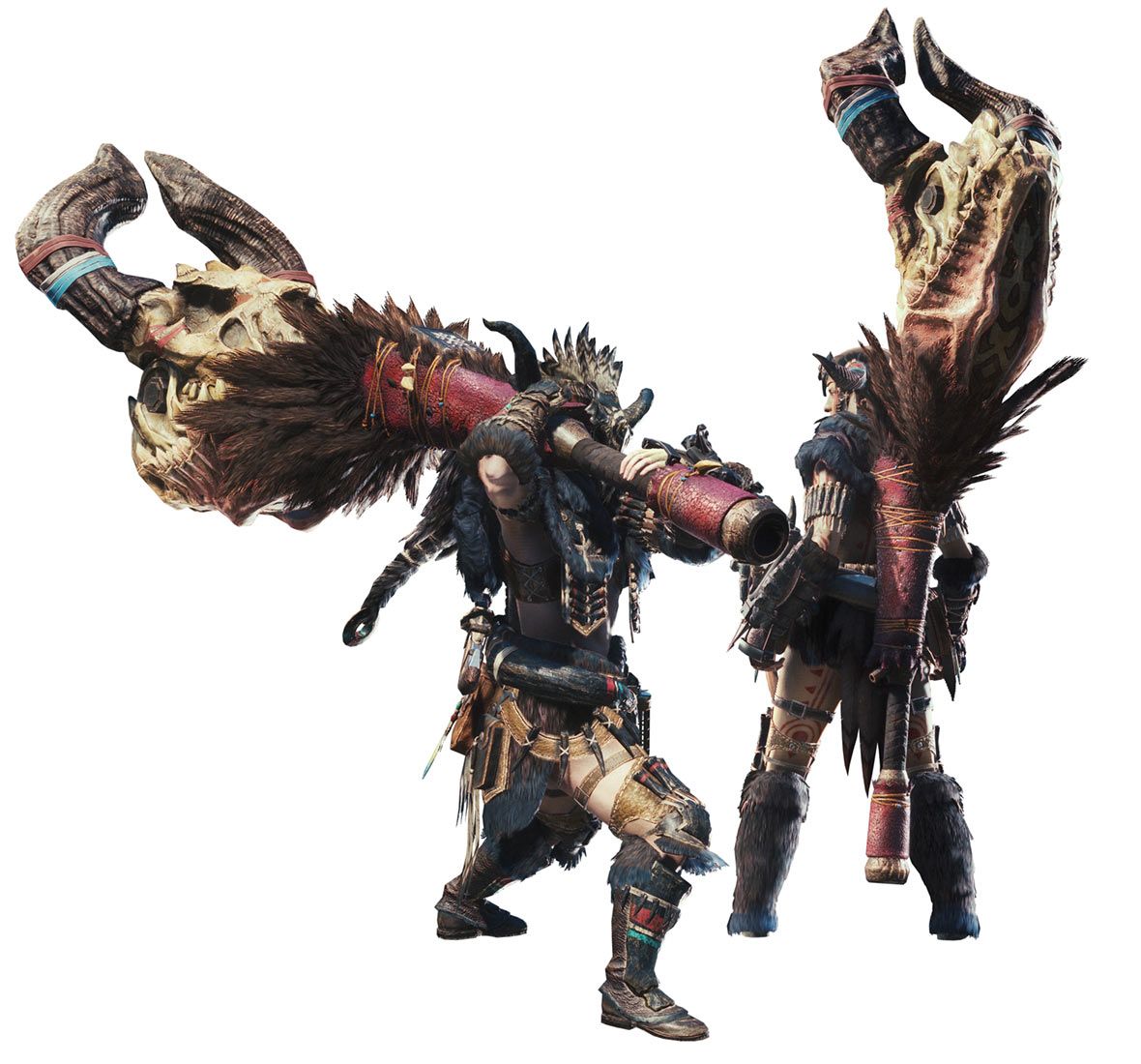 While the source video games undoubtedly take liberties, the idea of a large, handheld instrument that plays various tones by physically swinging the device does not seem immediately improbable. (A fair number of hunting horns from the games incorporate standard instruments such as bagpipes or guitars. For this question I'd like to focus on those archetypes that lack such secondary instrumentation)

Other aspects of the concept (such as use as a practical blunt weapon, or supernatural song-powered enhancements) are ancillary in my case; I'm primarily concerned with the feasibility of using physical movement to create tones, rather than traditional methods of sound creation such as blowing air, plucking strings, or percussion.

Are there any real world instruments that are played by moving the instrument?

If not, what considerations would factor into the shaping or utility of such a device? How might one form multiple tones from a single horn? (The games traditionally have precisely three each)

First seen in orchestras in the 1960s as an experimental musical instrument, a tube with internal ribbings, swung around through the air to make musical notes which "phased" depending what direction the tube pointed at any given time. 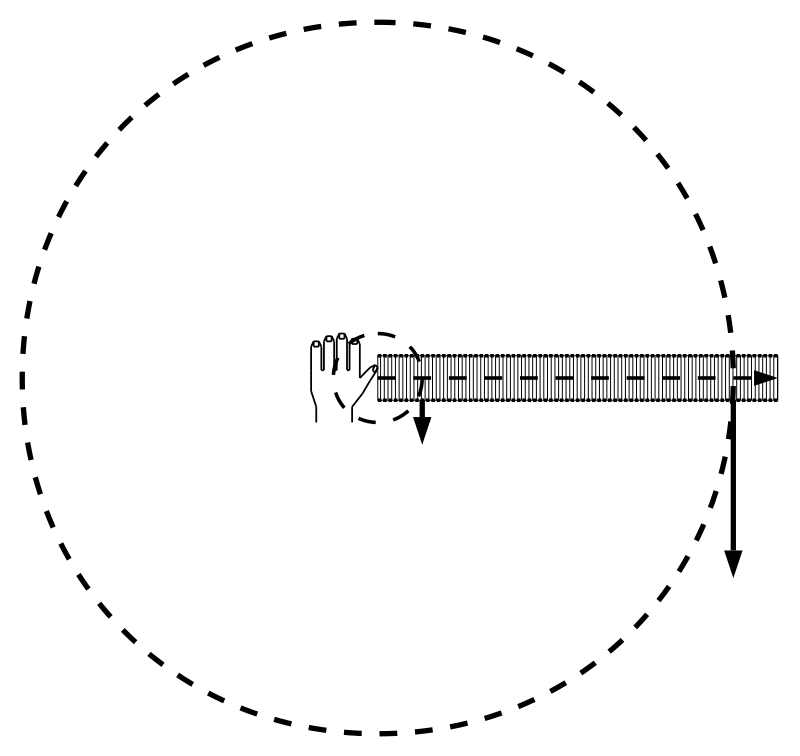 By Bernoulli's principle, the air moves through the tube toward the circumference from the middle.

Like a bugle, the 2nd 3rd, 4th 5 the and 6th harmonics can be played, the faster the higher, maybe even further harmonics with considerable effort.

It's described as hypnotic, mesmerizing to hear.

Are there any real world instruments that are played by moving the instrument?

Yes, the bullroarer. A traditional instrument throughout the world (Australian Aborigines, North American natives, and prehistoric Scandinavians all used them, as did the ancient Greeks), a bullroarer is basically a length of wood on a cord that is spun in a circle. Different pitches can be obtained by varying the radius of the circle, rotation speed, direction, or by twisting the cord so the body spins around its length. 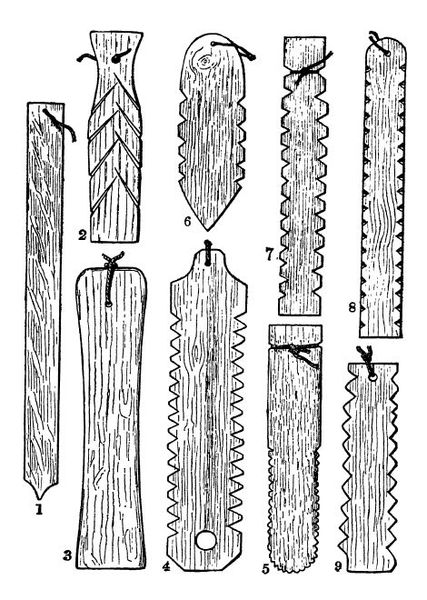 You'll notice that they have some key differences from the hunting horn. First of course is their size - a typical bullroarer is about the size of your forearm, rather than a gigantic monster head on a stick. Second (and related), they are spun in a continuous circle rather than an arc - you need to move them relatively fast to generate any appreciable noise, and if they were only swung in an arc, the note would be very short.

So while there are instruments played by swinging them, they don't have much in common with the hunting horn.

Apparently known by various names, in the west it appears to most commonly called a Chinese pigeon whistle 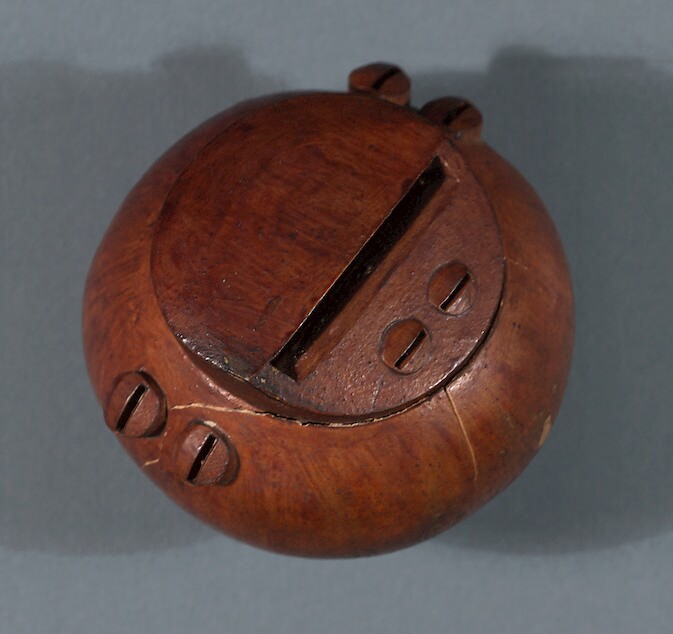 I first encountered these when attached to a replica Roman "Draco" standard to make a noise as the cavalry charged.

As a musical instrument, the theremin is played by not touching it, by moving one's hands through the electrical fields generated by the instrument and the player's body.

One could easily reverse the relative motions: place the theremin inside the weapon and make music while bashing a variety of monsters and evil hordes of EM generating Orcs and Blue Elves.

The key here will be the artful balance between interacting one's own body with the instrument and the bodies of one's foes.

The pūrerehua (AKA: bullroarer) dates back to at least 18,000 BCE and was common among many stone aged civilizations across the whole world. It is basically nothing more than an airfoil at the end of a string. When swung around in the air, it makes a loud whirring noise. The faster you swing it, the higher pitch sound it makes.

If you want a weapon that is an instrument when swung, you could perhaps reshape the blade of a Kyoketsu-shoge or other similar chain whip like weapon to make the same sort of noises.

I note that MH's hunting horn is a club-like weapon so the responses mentioning the bullroarer are, while technically correct, somewhat beside the point. So, to answer the question of the "feasibility of using physical movement to create tones" using a swung wind instrument, some casual searching shows:

Given that, the answer seems to be a definite "maybe". 0.18 psi is enough to operate some wind instruments and the MH hunting horn is longer than a baseball bat, meaning the tip could exceed 100mph if swung at the same angular rate, although it would require more strength to do so.

While not exactly meeting the criteria of this question, I did once attend a folk-music performance where a very skilled concertina player was demonstrating a few things.

As part of this, he swung the concertina around in wide vertical circles while playing it, which led to some wierd "doppler" audio effects, especially since we were in a relatively small function room!

However, I'm guessing this was more due to the changing position of the concertina, rather than the effect of the changing angle of the air pressure.

Either way, it was definitely a fascinating audio experience!

Not the answer you're looking for? Browse other questions tagged reality-check music or ask your own question.

17
Solving the difficulties of a world based on harmonics
83
Would a 'World Tree' be feasible in real life?
10
Creating realistic world - star cluster?
6
Rhino Horn in a Composite Bow?
26
What Purpose Would a Unicorn's Horn Serve in the Wild?
4
Would molten tin solidify and coat an organic horn?
5
How Would I Make an Oceanless World Feasible?
8
Would harpoons help in hunting large land animals?
2
Would this setting be realistic or feasible for this race?