Would pleopod-based swimming locomotion seen in animals like giant isopods work at much larger sizes, or would drag (or something else?) be too much of a problem? 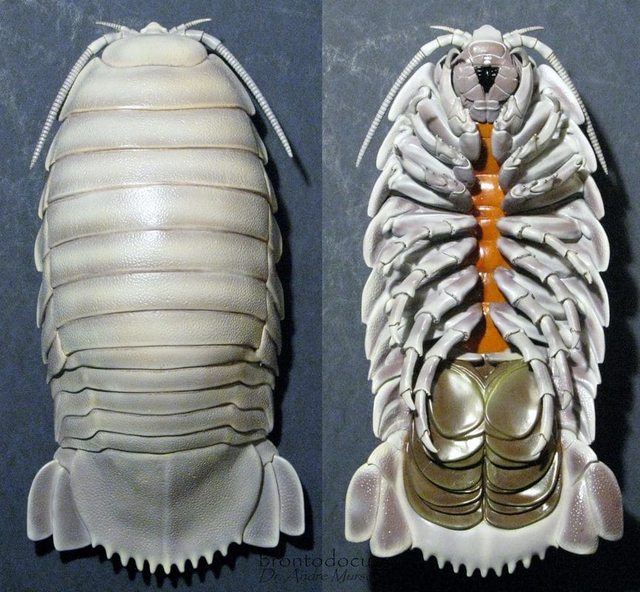 This video shows the pleopods in action from below, timestamp 0:00–0:28, with a side view later.

Imagine a creature, roughly the same proportions of the isopod, with pleopods running most of the length of its ventral side, perhaps 20–25 pairs. Anything from 5 to 30 metres long will do – that's about 12x to 80x the size of a giant isopod. Each pleopod would therefore be between half a metre to five across, and I would guess tens of centimetres thick.

This type of aquatic propulsion is called drag. Drag propulsion is so named because part of the swimming cycle, the recovery phase, has the swimming surface moving against the direction of motion to reset its position. This form of swimming is less efficient than lift-based swimming. Drag can be reduced by changing the profile of the surface in the recovery phase so it is less than the surface in the thrust phase. In the video above it's the clapping-like motion as the pleopods come together and swing forward.

My concern is that such large overlapping surfaces would, during the recovery phase, severly offset the forward motion, or be too small relative to the bulk of the organism to push it forward, or some combination thereof. Or something else I haven't accounted for.

The largest organism known that may have used pleopod-based drag swimming was the Aegirocassis, but the only specimen we have is only a little over two metres long. Contrast that with the largest swimming organisms, all of which swim or swam with lift-based biomechanics. Perhaps there is an upper limit to how effective this form of locomotion can be.

Ignore all the usual square–cube law problems with scaling up arthropods: I'm only interested in the biomechanical swimming action. The organism itself doesn't need to be arthropod-like in any other way.

While I have tagged this science-based and not hard-science I am expecting some number crunching will be necessary to show whether this would scale or not, and sketch the size and/or speed limits would apply.

There seems to be a lot of confusion about what drag swimming is. drag swimmers use a variety of inefficient methods to generate thrust, usually backwards. And use the position of the body, so thrust water is only on the underside, to generate lift offsetting the lack of control in how they generate thrust. A lobster swimming is the classic example. you get a sort of burst followed by a recovery and reset of the mechanism. If there is an obvious clapping motion you are looking at a drag swimmer.

Pleopods are using drag swimming the forward direction but the mechanism is the same, again thrusting water against the body to products forward thrust, we see this in your video.

There is not a upper limit so much as it is favored by animals that are not primarily adapted for swimming, but for swimming and crawling/walking. its just better to develop efficiency and to develop more control if you are a obligate swimmer, these are lacking in drag swimmers. It will work just as well for a large swimmer as a small one, it just does not work great overall. Drag swimming is good enough for a get away but for a habitual swimmer it is awful, so it depends on what you want for your creature. if it spends most of its time crawling along the bottom it is fine, if it is a open water swimmer it is awful.

Lift swimming is a problematic term it is a vague term that gets used to describe a lot of different things, some would body-caudal fin swimming is lift based others will say it is not. Today the largest swimmers use the classic fish system, Body-caudal fin form of swimming, sometimes called undulatory swimming, were the main propulsion is produced by a undulation producing thrust via the normal force. Whales use the same method, it is just turned 90 degrees on its side compared to fish. You can read more about this form of swimming in the link below, there are several forms of it. 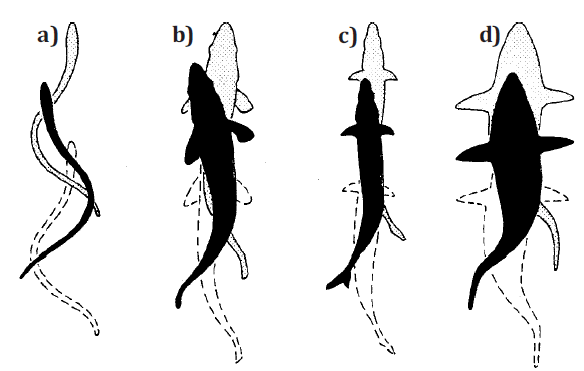 think of fish as walking, while the drag swimmers are frog hopping. the first is way more efficient for long distance travel because losses are much smaller since the motion is continuous, and there is little slowing down. while a frog use high energy acceleration followed by slowing to a near stop requiring repeating the high energy accelerating stage. accelerating is expensive, better to just maintain. pleopods have pushed their system as far as it can go efficiency wise, shortened the "drag" phase and extended the "thrust phase with extra thrust surfaces, but there is still a distinct two step process with a thrust and reset, so it is nowhere near as efficient as an oscillating swim stroke.

the pleopod users (isopods and lobster) also have to rely on the body shape evening out the odd angle of thrust, because thrust is not symmetric. this is done through drag, hence the name, which adds more losses. While fish end up with more even thrust because thrust oscillates back and forth, meaning they can minimize drag as much as possible while drag swimmers need a lot of drag to have any ability to steer.

Some extinct arthropods may have use a similar form of propulsion (see images below), or the more eel like form which is also Body-caudal fin propulsion. Although some of them may have uses something closer to hydrofoils (what some call true lift based swimming) swimming. this is the same form seen it in some large extinct animals like pliosaurs and plesiosaurs, penguin and sea turtles also use this method. Any of these would be more likely of you intent to make a habitual swimmer, with little no use for its legs, something closer to how a whale swims if you have a hard time imagining how it works. 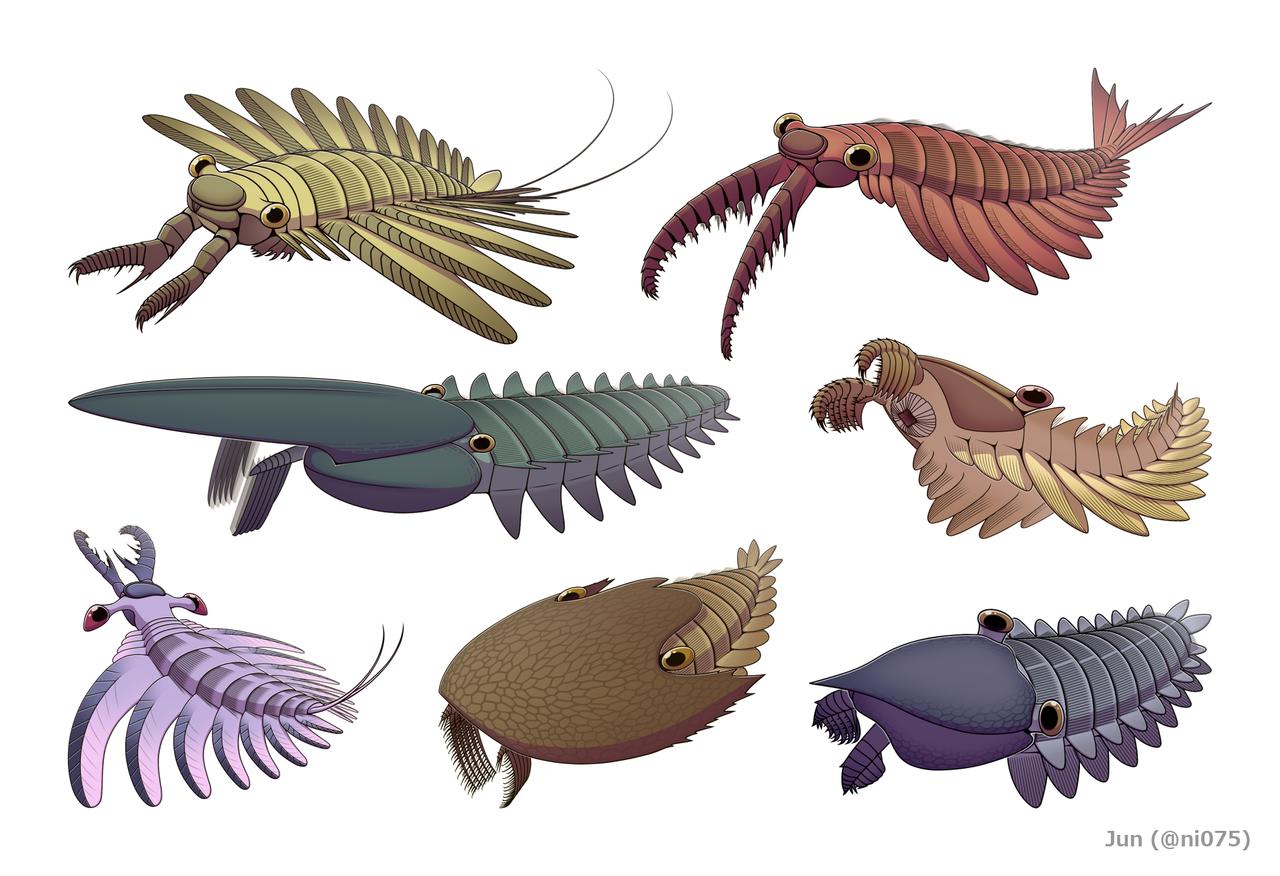 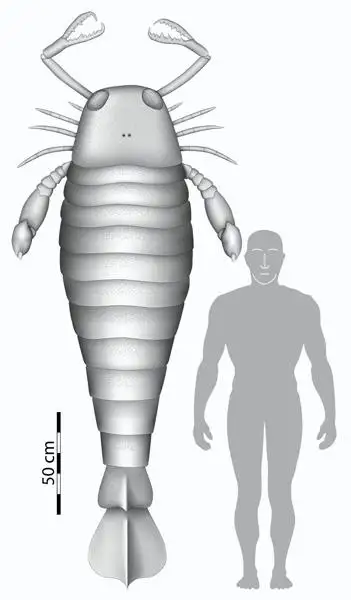 Ducks and other water birds propel themselves in water with a similar mechanism.

Even underwater swimmers can use breaststroke to move underwater, which use a similar mechanism.

It might not be the most efficient, but as long as there is a way to fold the propelling appendix during the recall phase, in order to reduce drag, it can work.

In his comprehensive study of sea monsters, Bernard Heuvelmans called this type the "great sea centipede". Con-rit is the Vietnamese name for this rare cryptid. Karl Shuker has a discussion about this type of sea monster on his web page and quotes Heuvelmans with a description.

The most prominent of these is the 150-ft-long monster spied for about 30 minutes by a number of sailors on deck aboard HMS Narcissus on 21 May 1899, after the ship had rounded Algeria's Cape Falcon...

"The monster seemed to be propelled by an immense number of fins. You could see the fins propelling it along at about the same rate as the ship was going. The fins were on both sides, and appeared to be turning over and over. There were fins right down to the tail. Another curious thing was that it spouted up water like a whale, only the spouts were very small and came from various parts of the body."

The only major problem is the con rit's immense length - far beyond anything recorded so far by science from a known modern-day (or fossil) crustacean. It is well-known that the spiracular system of respiration utilized by insects (involving a vast internal ramification of minute breathing tubes) prevents them from attaining the gigantic proportions beloved by directors of science-fiction movies. However, crustaceans breathe via gills, and their bodies are buoyed by the surrounding water. Hence the evolution of a giant aquatic crustacean is not wholly beyond the realms of possibility and, to my mind, offers the only remotely feasible explanation to Vietnam's anomalous con rit or sea millipede.

The con-rit is a giant isopod. It is plausible to me. Isopods have conquered just about every environment on earth, and in the hadal zone of the deep seas, deeper than fish or molluscs can tolerate, they are the main macro-organism. The con-rit is a giant elongated isopod dwelling in the deepest ocean. Only very rarely does one come to the surface.

OF course can be easily seen that the mentioned creatures had just two pairs of fins in difference with the 5-10 pleopod pairs of the isopods.

Now, I know your question is not based on plausible evolution, but it is safe to think that a massive creature using this type of water propulsion would specialize just some pairs of its limbs to an specific activity, who knows how many, but while animals turn bigger each movement becomes more costly energetically and the limbs and all the movements that they involve are quite a notorious cost for any organism and even more with the drag swimming style which is more energetically expensive than other swimming methods.

Therefore, although it is not safe, it is quite probable that a creature like the one you describe ends up specializing a few pairs of pleopods to propel themselves in the water and that the others end up atrophy and disappear or specialize for another purpose.

So this answer does not take much into account the physical calculations necessary to determine the energy expended with each movement, the horizontal momentum or the drag generated by the water, but is based on the deduction that smaller animals can usually maintain a greater limbs than larger animals.

When investigating a little more, it seems that this answer becomes completely useless for the purposes of the question, since it turns out that the anomalocarida to which the Aegirocassis mentioned in the question belongs, did not use a swimming method similar to the pleopod drag method of marine isopods (at least not significantly or observably).

Here some videos of the Anomalocaris, an strechtly related specie with the Aegirocassis, showing a swimming method which was possibly very different of Isopods.

Not the answer you're looking for? Browse other questions tagged science-based xenobiology bio-mechanics .

5
Must life be molecular/atomic scale nanotechnology?
34
What would an efficient swimming creature in magma be like?
9
Flying or swimming in supercritical CO2?
6
Swimming in the rain?
4
Would a nictitating membrane, eyelid AND eyelashes get in each other's way in the same eye?
16
Swimming in space. What is the mechanism?
6
How would Humanoid Insects Molt?
4
Increased flexibility for dragons?
3
If Gastropods Were the Size of Dogs, What Sound Would Their Mouths Make?