Feasibility of a sand gliding creature?

Would it make sense for a desert creature to glide along the sand to traverse long distances?

There's a number of gliding animals in nature, most of which use it as an efficient travel option for long or short distances or simply to escape predators. Plenty of gliding animals already exist in arboreal environments BUT could it also be used to traverse a desert? The creature I have in mind would probably be a reptile and would dash to gain speed, then spread its membrane and occasionally use its legs or tail to swipe the sand to stay airborne. I'm not an expert in aviation but I assume the creatures membrane should be wide and at the front to create lift. The hot desert sand should also help keep the creature in air. 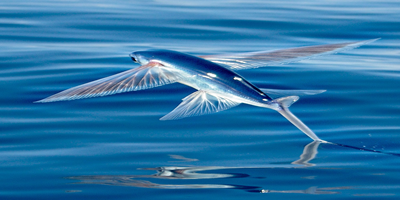 This mode of travel was inspired by observing flying fish using their tail fins to keep themselves in the air.

I got your sand glider right here! The desert locust. 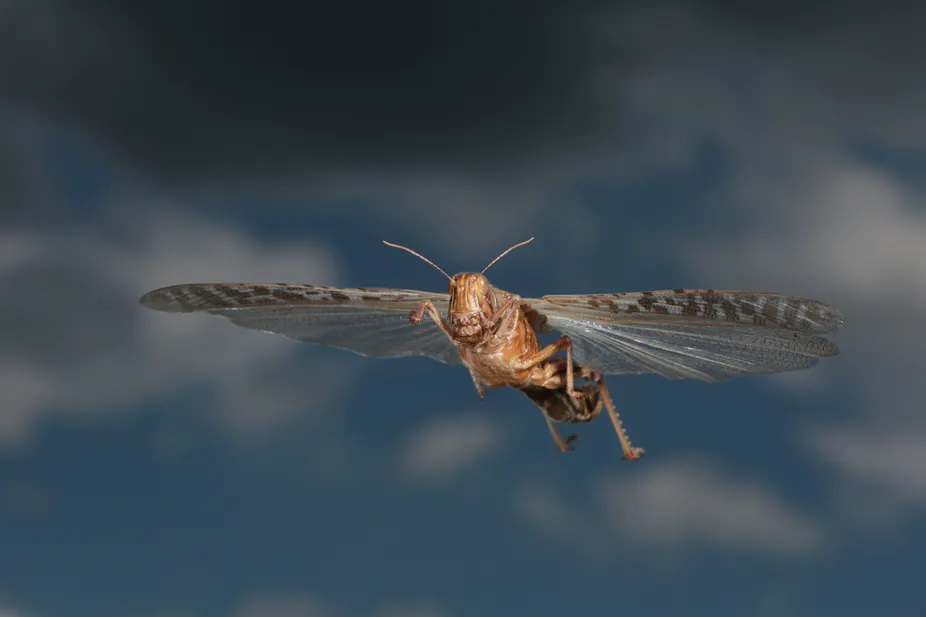 These are big desert insects. They can flap. But once they get going they also glide.

Gliding has been observed frequently in adults of the Desert Locust, Schistocerca gregaria. It occurs regularly amongst locusts descending to the ground from their overnight roosting positions in vegetation and on a number of occasions dense concentrations of adults at the leading edge of and within intermittently settling or "rolling" swarms have been seen to descend to the ground by gliding...

The duration of individual spells of gliding was very variable. Whereas the locusts at Bulo Burti were gliding continuously, conceivably for hours, the duration of glides in the other observations ranged from 5 to 60 seconds, the bursts of gliding alternating with bursts of flapping flight. Even during the longer bursts of gliding the locusts were not obviously losing height, and gliding did not lead to settling, although this has been observed on other occasions. On the other hand, the locusts were not obviously gaining height, although Rainey (1958) has provided evidence that this can occur in the field.

Gliding helps them move rapidly across the sand as suggested in the OP, although they don't run on the sand then jump up and glide. They flap then glide once up to speed. Gliding is used for the cross ground "rolling" movement of swarms which I think is close to what the OP envisioned. Gliding is also key for long distance travel of swarms - gliding insects can catch thermals, rise to altitude and cross great distances with a minimum of effort. Even across the Atlantic!

Running on sand is an energy intensive activity, because it is really easy to sink into it, paired with the issue that sand exposed to the sun becomes really hot. You can see it already with any homo sapiens frequenting a beach in summer. 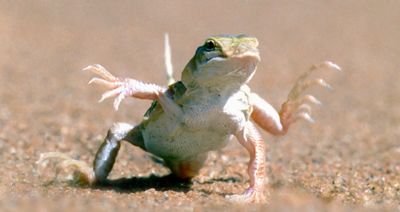 I doubt that the energy saving achieved from gliding would overcome the added expenses of trying to run on the sand to get enough speed.

Further, data from free-ranging colugos suggest that although gliding is not more energetically economical than moving through the canopy, it is much faster, allowing shorter times of transit between foraging patches and therefore more time available to forage in a given patch.

Gliding is useful when you have lots of tall things around like in a forest to get from place to place, or to escape predators in the sea. It's not a good long range travel method, and would be worse in the desert where it's harder to find high places.

It could be used as a way to escape predators if you had an irregular enough desert.

I can imagine some kind of reptile living on mixed enviroment where are some rocks and some not too big sand areas. It can give advantage against predator when can fly from one big rock, through sand pit, to another rocky formation and then climb up. Running on sand will be hard - all that skin/wing needed to glide will be problem when try to do that.

If use back legs to sprint and front as wings then have chicken. Maybe Yours chicken not have feathers but only bat-like wings connected to torso but that be at most chicken shape and body construction animal. If make it bigger size then get Emu/Ostrich, maybe with little bigger wings.

Not the answer you're looking for? Browse other questions tagged creature-design flight deserts or ask your own question.

2
Accidental invention of gliding
3
How can a constant sand storm be explained?
60
Why is this creature afraid of water but not of body or plant fluids?
5
How does my critter communicate across the liquid/air barrier?
6
Would a tunnel in sand collapse?
5
A predator with pseudo-invisibility, partially achieved by airborne chemicals
9
Rocky desert or Sand desert - Which would appear in this scenario?
6
Armor design for bird people? | Gliding
4
What would be the physical characteristics of a sapient, mountain-adapted, gliding mammal capable of magically producing thrust?