Insectoid creature that changes from solid to liquid and vice versa, how would this be possible?

I was thinking about the concept of a little relatively simple creature with a maximum size of a few centimeters such as some beetles but with an "intelligence" similar to ants, with the capacity to turn to a liquid stage and return to its original form (or even other) at will, in a similar form as butterflies and other insects do during the metamorphosis, other animals to consider to develop the working of this creature are flat-worms and based in this other question, echinoderms can harden and soft their body and fianlly slime molds which can move together in a similar form to a high viscosity liquid. 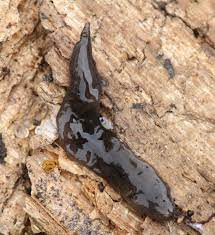 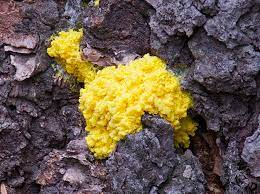 I´m not sure about the utilities of this feature but I thought can be used to rest and rebuild tissues after an injury, or occupy difficult-to-access spaces. But is over all just a aesthetic concept but with some justifications.

So the general caracteristics of a the creature which I want to get would be: An original segmented body with exoskeleton like integument similar to arthropods, which could be solved to turn to the liquid the stage and be able to recreated again and stay as a living creature even in the liquid stage. The mechanism used to change between stages can be encapsulation or other (I not sure about the possibilities).

If a mechanism like this could work, how would do that? Speaking about biochemical and biomechanical mechanisms.

Then I will ask other questions that will derive from this, about a group of colonial beings with this liquid property and another about this ability used to get great anatomical changes.

Not exactly turning into liquid, but an octopus can squeeze its body quite a lot and crawl through very narrow space, like the inside of a beer bottle. This thanks to the lack of bones.

Turning precisely into a liquid is going to be problematic, because liquids do not have a proper form and adapt to the container where they are, meaning that there is the concrete risk of being splattered around, without having the T-1000 ability to collect all the droplets.

You could have a creature that had a hard exoskeleton for protection, and under it a very flexible body with lots of muscles and no bones.

Like an octopus, they would be very fluid like a liquid when needed, but when they wanted to endure damage they would get their hard exoskeleton up.

They'd basically be a fluid bag when in their water form, so it would be easy for a hostile creature to rip them open, but they would be able to access smaller spaces and get nutrients from more weird places.

I've struggled a bit to get a real feel for what you want. You already mentioned the butterfly, and the caterpillar's ability to virtually liquify itself, completely transform it's body, yet retain memory. So we know it's possible. In this case, however, the resulting liquid form isn't capable of movement, only growth into a different form. So any organism using this method could likely heal, but this would leave it vulnerable and would not aid in motility.

We know that various kinds of primitive worm-like organisms can be cut into pieces, and regrow whole organisms from the resulting parts. Some of the best known examples are starfish and flatworms. The flatworm model seems especially relevant here. as the organisms would be very soft and flexible, able to get through small spaces and be cut into pieces while still regenerating. So the biochemistry for these organisms is reasonably worked out.

But this doesn't get you a shell or carapace. One way for this to work would be for your flatworm-esque organism (let's call it a slug) to exude a shell-like substance that could harden into a carapace. But every time they needed to undergo a really radical transformation or squeeze through a tight spot, they'd need to lose the shell and with it all the investment of the carapace. I have a simpler alternative.

There is another organism that supplements it's natural shell with extra protection, the hermit crab. They obtain a shell externally, and can swap them out as they grow or lose the shell. Your slug can follow a similar model. its highly flexible body can fit inside a shell, or stick hard bits of material from its environment on like a suit of scale mail. Possibly even climb into a shed exoskeleton of an insect. It would wear this like a suit of armor. articulating the limbs of an exoskeleton or extending pseudo-limbs out for motility. When the slug was attacked, it could potentially escape the armor, leaving it behind for a predator to fixate on. The same mechanism would allow it to climb out, go into a tiny space, and then go back or acquire a new shell after penetrating the narrow space.

The ability to reproduce asexually from a single organism broken into pieces lends itself well to the potential for a colonial organism. I even imagine a group of such slugs coordinating behaviors to mimic a larger organism or inhabit a larger shell collectively. They would all be genetically identical and behaviors that benefit clones (like a colony sharing food to specialized individuals) benefit the reproduction and survival of the genome.

Not the answer you're looking for? Browse other questions tagged science-based biology creature-design biochemistry insectoid .

11
Ability to harden skin at will

15
How would a creature produce and store Nitroglycerin?
3
Can I make the carbon cycle shorter - by metamorphosis from plant to animal and vice-versa
2
Which of these options is more achievable for a biological creature?
10
Substance that changes quickly from liquid/gelatinous to solid?
6
An organic "mecha" or "krang". Possible or unreasonable?
9
How to design a humanoid with facultative quadrupedism?
4
How arthropods could evolve a placoderm-like skeleton (semi-exoskeleton)?
2
How would a "Tesla tree" work?
2
Can a creature have possible locomotion if the legs are positioned in a x formating to the pelvis or this symbol ><
5
Could a frog develop into a fish?