Easiest way to turn my space colonists into savannah-adapted beings?

A rare opportunity to send a colony ship off-Earth arose.

The target is a somewhat Earth-like planet, with the exception that it was apparently conceived by George Lucas, as it only has one climate and one terrain: Africa-like Savannah.

This poses a specific problem: not every human on Earth is equally adapted to live in Savannah like climate.

To quote from Wikipedia:

Humans with dark skin pigmentation have skin naturally rich in melanin (especially eumelanin), and have more melanosomes which provide a superior protection against the deleterious effects of ultraviolet radiation. This helps the body to retain its folate reserves and protects against damage to the DNA

Now, one solution would be to only recruit the colonists who are already naturally dark skinned and thus better adapted. Africans, maybe Dravidians. However, that solution is not acceptable in the reality of my story (the reason is irrelevant) - the colonist pool must include people of all skin colors and ethnic/racial/national origins. In total, we need to send ~10,000 colonists; and at least 60% would be light skinned.

Having said that, there's no major objection or problem with taking a light-skinned colonists and making them eumelanin-rich and presumably darker skinned. The colonists are guaranteed NOT to object, and whatever forces prevented African-only colony won't affect this either. So, the only problem is, how?

Thus, the question: what would be the best, easiest, least "fiction" way to achieve the goal of turning all - even light skinned - colonists as adapted to Savannah living as dark skinned ones?

"Best" is graded on how close the required science/technology is with what is state of the art in 2015 on Earth today. E.g., "nanoprobes changing someone's DNA" is a possible solution, but clearly nowhere near current state of the art capabilities.

A trip of a few weeks, but the colony will be left on it's own for 1000 years? Seems extremely unlikely unless they ran off during a war and no one noticed.

Have you looked at the middle east? you don't have to be black to survive just fine in a hot sunny environment. It's called wearing the proper clothes. It is much cheaper than forcing a genetic or cosmetic change on %60+ percent of your colonists.

There is also sun screen, granted after the first couple years they would need to find a way to produce it locally but even using dirt can be effective.

Even if the whole planet is a savanna, you still have a north and south, not just a band of land around the middle of the planet. The farther north and south you go from the equator the less 'direct' sunlight you are subjecting your colonists to. Look at the steppes in Eastern Russia and Mongolia. Much safer for lighter skinned people. So there are plenty of low tech ways to protect your colonists.

Educated, properly equipped, and a smart landing zone to start living in is all they really need to survive the sun.

A near-future (less than 5 years for clinical trials to start) way to make light skinned people darker would be through a CRISPR therapy. It is a valid therapeutic technique that shows promise for fixing or altering a wide range of DNA sequences. Assuming that construction on this space ship started in 2015, then with a commensurate investment in astronaut modification through CRISPR therapies, it's good odds that the making light skinned people darker would happen.

Been there, done that

Humans are already savannah adapted beings as that's where they evolved for a million years before leaving Africa. They have eye sight well adapted to detecting motion on their periphery but high detail in front. Opposable thumbs and large brains support tool making and fire usage. Clothing, tools and shelter naturally flow from these capabilities. Humans resubjected to intense, continuous sunshine adapt faster by making the right kind of clothes, not altering their DNA. The OP has made no mention of severe survival pressures based on skin color so it's unlikely that dark skinned colonists will fair substantially better than fair skinned colonists if everyone has access to proper clothing and weapons.

Clothes on the savannah

Every environment with plants has some kind of fibrous material. Sub-Saharan Africa is native such fibrous species as the Raffia Palm. Any plant with bast can be turned into clothing though this is labor intensive. Botanists will have a field day with identifying new plant species and their various applicability to clothing and shelter. Perhaps there's a super-cotton that doesn't require the extraction of seeds from the fiber. It's an alien world, there's no way to predict what kind of plants can be found there. The article on bast could be very helpful in developing feasible cotton replacements. How much energy/time it takes to make clothing will depend heavily on available labor force and the primary fiber-yielding plant.

Clothing has been manufactured in sub-Saharan Africa for thousands of years. While weaving is expensive, colonists should be able to make looms to speed the process.

If they are going to be abandoned on the planet without much high tech for at least a millennium, and possibly more if the planet was settled in a hurry as a result of a war or natural disaster, then evolution will operate on its own.

Granted , a 1000 years isn't really enough time for major changes to the organism, but during the period in question intermarriage between people will even out the skin tone, and there should be some selective adaptation towards increasing pigmentation; in other words, the generation at the end of this process will be generally brown, and in the process of getting browner.

You didn't mention other adaptations, but based on existing human types, people's who live low tech lifestyles in the savannah will probably also evolve towards becoming much taller, having efficient heat regulation mechanisms, and efficient metabolisms to retain water and use energy efficiently. The Maasai people have adapted to this sort of environment and are generally very tall, long limbed in body form. In fact, this may be close to the "ancestral" form, since we all came from there, and adaptations like becoming short limbed and fatty to survive in the cold are more recent, dating after the migration out of Africa.

Further adaptations by sub groups is also possible. If some of the people settled in the mountains, they will begin to adapt in the way many Indian tribes in places like Peru did, evolving more efficient red blood cell production and gradually increasing their lung capacity. I suppose a group living by the ocean could become adapted to a lifestyle involving deep, unassisted dives to gather food from the sea floor, and other adaptations are possible. Perhaps the most extreme Hominid adaptation was Homo floresiensis, a sub group of proto humans trapped on a small island for hundreds of thousands to millions of years and eventually becoming a species of "dwarf" humans to adapt to the limited resources of an island environment.

Of course for this sort of adaptation, the base population needs to be isolated for long periods of time, and to have an environment which produces pressures to adapt for successful survival. On the plant "Lucas", there evidently are no separate biomes, so major evolutionary change will not be possible. In tens of thousands of years, your human population may become somewhat like Arctic Terns, where people on the Eastern end of the continent can breed with the group just to the west of them, but as you go farther down the line, it becomes much more difficult to successfully breed until an "Eastern" human won't be able to breed with one from the far West end of the continent.

My own sense of this is Humans 10,000 years down the line on your planet will still be (rather brown) humans, and will be fully capable of interbreeding, simply because humans are highly adaptable and both capable and willing to walk long distances in search of food, trade and mates. Of course this also assumes the Humans stranded on the planet never develop or have access to technology (which may be possible if planet Lucas has no oil, coal or mineral deposits).

Well, natural selection already has part of the answer, and Man's own technology the other.

For one thing, clothing is technology, and clothing helps lighter-skinned people deal with the sun as it is. Second of all, the sun is not insta-cancer for people with lighter skin. Some of them would at least survive long enough to breed.

So you make sure that the people who do survive with lighter skin, want to breed with the people with darker skin. And make sure that people breed a lot; yes, some of the kids will not survive, but the ones that do, will be the ones you want anyway. Natural selection takes over from there; within very few generations, you will have a small population adapted to your savannah.

And keeping in mind that yes, Man is, basically, a savannah chimp, that stumbled upon technology to deal with his own shortcomings as an ape trying to live on grassland, faced with larger prey animals and fewer trees to escape into, than his forest-chimp brothers. You're basically breeding what would be called in other species "throwbacks". Of course, their intelligence would - should - still remain as high as any modern human, but physically, they'll be more like our distant ancestors were.

As for how they looked, probably not much different; forest apes have hair and very little fat, while us savannah chimps have much less pronounced/thick body hair (though it's actually all still there) and a better fat layer (allowing us to swim - we're the only ape that does.) Why moving to the savannah would trigger that sort of change, is an interesting question in and of itself.

Afrikaners are descended from one of the most melanin-deficient European populations, and yet they thrive in the African savannah. 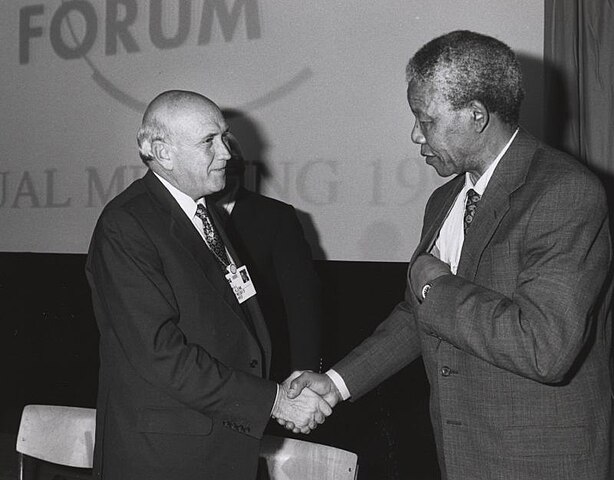 Two humans adapted for life in the African savannah. Note the difference between their melanin levels. (F. W. de Klerk and Nelson Mandela shake hands in January 1992; picture by World Economic Forum, available on Wikimedia under the CC-BY-SA-2.0 license.)

Since real history provides a counter-example, it follows that the premise of the question is counter-factual. As a consequence, we can safely conclude that all humans can live in the savannah.

Afrikaners are not the only counterexample, just the most striking, because their ancestors moved to Africa in relatively recent times, and the source population is very lightly pigmented. Australians, Egyptians, Persians, Arabs, Hebrews, all are "white" (a.k.a. Europoid, or, in American, Caucasian) peoples who live (or, historically, lived) in hot and sunny climates.

Not the answer you're looking for? Browse other questions tagged biology space-colonization or ask your own question.

9
Habitable environment on a big moon of a gas giant lacking magnetosphere
7
Genetic engineering as an alternative to magnetosphere (radiation protection)
16
How to keep my colonists primitive?
27
How should fledgling planet colonies deal with supply crews suffering from barophobia (fear of gravity)?
5
UV emitting alien species
72
Can a human colony survive on a 'hot' world?
0
Effects of a star and planet on human evolution
20
Preventing racism in space colonies