What would a mermaid wear during the winter?

I've been trying to create a world which mermaids are a part of. These mermaids have the ability to transform into an elf when out of water and dry. Technically, they are less mermaids turning elves and more elves turning into mermaids. They are water elves, and there are other types of elves in this world as well that remain elven constantly. These mermaids have access to typical clothing, or as typical as can be in a fantasy world. I'm trying to think of what type of clothing these mermaids must wear to keep warm in the winter. Mermaids that live in the deep sea have adapted to that and have different bodies to live in the freezing and dark water, however other mermaids remain near the top where it is warm. Anyone have thoughts on what clothing they could wear when cold? For clarification, this is for when underwater.

As L dutch already pointed out, the cold water drains heat very effectively, no plausible fabric can stop that *.

It kinda breaks the spell of the mermaid by having them as anything other than the epitome of feminine beauty, but if the water is going to get dangerously cold, then realistically they'd spend autumn gorging themselves to fatten up to the point that they are heavily insulated with a good few cm of blubber.

They would look like sea lions. By human standards they'd be obese. 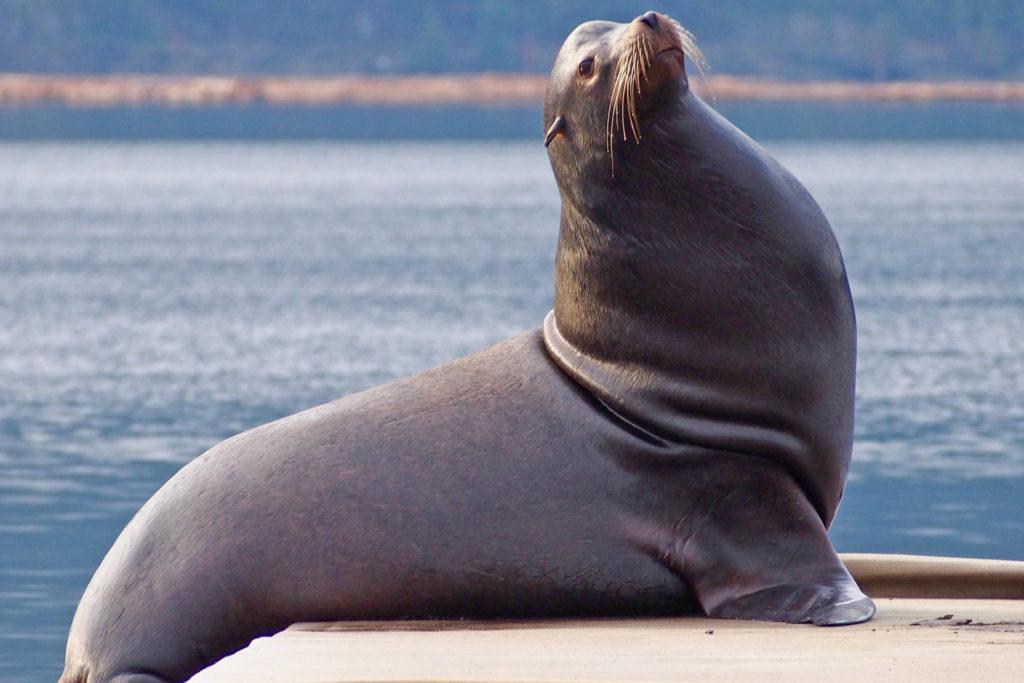 * Or if you can explain a subsurface neoprene manufacturing industry, and your mermaids look like this: 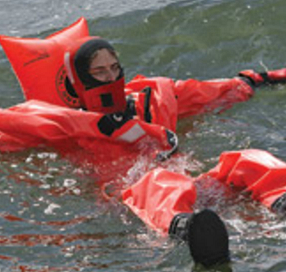 Only Disney Mermaids Wear Seashells
Why would they wear clothing at all? If they're able to shapeshift and they've adapted to watery life (by becoming part fish or part manatee), then they wouldn't need clothing at all.

Consider normal nudity. Humans have historically gotten along just fine & naked in a cool maritime environment (Tierra del Fuego - don't let the climate type fool you, it's COLD, rarely getting into the 50s in summer), there's no obvious reason why Elves can't similarly adapt to their own environment and more especially to a partially aquatic environment.

Your Elf-Merfolk won't wear anything in winter (or summer).

The problem when being in cold water is that water is pretty effective at dissipating heat. To avoid that turning into a mortal problem, a warm blooded creature need to have a good insulating layer to reduce heat losses.

If that's not possible, the only clothes which can offer protection are thick drysuits, like those used by scuba divers in cold water. Anything more loose would allow water circulation around the skin and also allow the related cooling.

Incidentally they would not affect too badly the hydrodynamics of the swimmer as more loose clothing would, which is also an aspect to not be neglected.

Considering that these shapeshifting elf/merfolk are shapeshifters, there are two possibilities:

Firstly, that the act of shapeshifting to their aquatic form gives these people the ability to tolerate the temperatures of the seawater in which they live. While they may live in warm seas, warm seas are nevertheless capable of being sufficiently cold that a human exposed in them long-term could suffer from hypothermia after many hours or a few days. This means that if these merfolk are adapted to their aquatic environment, then they won't need clothing while in the water.

So... if the act of shapeshifting is what allows the merfolk to tolerate the lower temperatures of the seas they inhabit, then the attire of their elven forms would necessarily be identical in its protectiveness to that of other non-shapeshifting elves in similar environments, though not necessarily identical in appearance.

Alternatively, if it is the physiology of the merfolk that gives them the ability to tolerate the temperatures of the seas they inhabit, and this tolerance or resistance to hypothermia is a constant between their terrestrial and aquatic forms, then this significantly alters these people's need for clothing.

Given that they aren't likely to be insulated from the temperature of seawater by medieval clothing, and clothing would be a hindrance underwater, they must be able to tolerate the temperatures of warm seas, which as I have said may still be significantly lower than human body temperature.

This tolerance to cold environments would transfer over to their terrestrial forms. Since air has a much lower thermal conductivity and specific heat than water - which is to say that cold water draws more heat away faster than air - these merfolk would likely be able to tolerate rather cold conditions without needing any particularly warm clothing.

So, in this alternate case, we might expect merfolk to go about on land scantily or lightly dressed even in cold weather, and they may not feel the need to don extra clothing unless the weather is both cold and wet, or snowing.

However, as water attenuates ultraviolet quite effectively, I would expect that unless they have dark skins, these merfolk would probably be as susceptible or more so to sunburn than their non-shapeshifting relatives, and so might dress in light but concealing clothing in summer conditions.

Having presented these options, it is up to the OP to decide which of the two options best describes the merfolk in question.

They stay on land. Clothing we be ineffective against cold in water. Since they are not adapted to the cold they migrate to land ever winter and back to water in the spring.

They can wear stander human/elf cold weather clothing while on land.

Either they don't stay warm, something else does, or the answer is more simple than you might think.

Have you ever heard of cleaner fish? No? What about clownfish, which have protective mucus? Cleaner fish evolved to remove parasites to A) secure an easy source of food, which would be invaluable to fueling a mermaid's large brain and B) avoid predation, as cleaner fish aren't eaten by their 'clients.' Therefore, why not cleaner mermaids?

Now, mermaids need a place to sleep, right? And if they're anything like people, they'll want a place to call home. Given that they'll already be spending a lot of time in something else's mouth, why can't that be their home?

Now, it's a natural instinct to defend one's home-one's territory-so these mermaids will defend their host while using its mouth as shelter, each defending the other when needed. This strategy of course comes with certain risks; acid reflux, saliva exposure, accidental swallowing-and because of natural selection, it seems our cleaner mermaids will develop progressively greater acid resistance, up to the point where they can get swallowed for fun-or warmth.

TL;DR: Assuming mermaids develop a symbiosis with certain sea monsters, they don't need to stay warm, because something else will be supplying the heat. Otherwise, any mermaid, through magic and/or biology, can and will have adapted to thermoregulate (and cope with freezing temperatures) in water, as even tropical seas can become too cold to sustain human survival, therefore ensuring the whole clothing/blubber kerfuffle completely moot.

In my humble opinion, if you want to know what mermaids will need to deal with cold air or water, just look at a dolphin.

They wear nothing in the water. They just shift to third-form when they need to dive below the warmer thermal layers, or when winter winds steal the warmth from the shallows. As first-form is fully elven, third-form is fully fish, complete with a cold-blooded circulatory system, capable of surviving extremely cold water.

Fur pelts. It's not the most ethically sourced of materials, but it's remarkably good at heat insulation (especially when the fur comes from a polar animal). Marine mammal pelts (pinnipeds and sea otters) in particular would be good fits for beings who spend much of their lives underwater.

Victorian bathing suits, when worn, were not for modesty but for warmth. Hence, they wore wool, which keeps its insulating powers even when wet.

For that matter, check out Victorian bathing suits for the style, with some alternations for the tail.

This, mind you, is for winter and other cold situations; they would have to be better adapted to the cold than a human, and this just be a supplement.

Leather made from Seals, Whales or similar creatures. Not only will your mermaids be warm... but they will be warm and in style to meet any fashion need.

Can Seal And Whale Skin Be used to Make Leather?

Seal skin has been used for leather for a long time. Indeed, it is leather as all skin (including human) when properly tanned is leather. It's really a question of how thick it is. Human skin isn't thick enough to make a good leather.

Whale leather also exists, but some comments online suggest many species' skin is too thin or rubbery to make what we humans would consider a good leather. Nonetheless, not finding a lot of whale leather products today may have a lot to do with decades of sustained Green Peace effort.

Since you mentioned these mermaids of yours transform into Elves when on land, I personally say their fashion doesn't matter and they should be put to death on sight, the arrogant "we live longer therefore we're better in every way" pieces of... cough... sorry.

There's a race in Dungeons & Dragons: the Sea Elves. I recommend you turn your attention to researching them, especially in the Forgotten Realms setting.

Because water expands as it freezes, both water that is warmer and that is colder than four degrees Celsius will rise, so normal convective processes will keep the main body of water at four degrees, with fluctuations only near the surface.

So if they cannot withstand four degrees, they will have to stay near the surface even in summer; if they can, then they have a zone where they can stay all winter.

Mermaids could make use of fur coats and shed it during warmer months.

Some river otters shed their under fur during warm seasons and don’t make use of fat to keep warm; they instead use thick fur tightly packed together like snake scales to prevent the under fur from getting wet. As another layer of protection, their glands produce oil to allow water to bead off keeping the otter from freezing.

Your mermaids could make use of the same adaptation producing thick fur and oil during winter months to moult it completely off during warm weather.

Now, if your non-deep sea mermaids need to wear something because they don’t have that adaptation, you can go the dark route and have them slay deep-sea mermaids for their coats and oil. Not much different than we did to Japanese river otters (which are now extinct).

Not the answer you're looking for? Browse other questions tagged clothing mermaid or ask your own question.

4
Can Seal And Whale Skin Be used to Make Leather?

12
What kind of attire would covert ops actually wear?
42
What would people on multi-generational ships wear?
9
Could mermaids feasibly make clothing out of natural rubber?
6
Surface Clothing for Merfolk
10
The History of Werewolf Fashion, Part 1: the 2000s
11
Would nomadic mermaids be capable of domesticating fish that they herd?
3
Clothing With Magic In Mind
12
Why Would Adventurers and Mages Wear Impractical Clothing?