TL;DR: what normally crew-served or heavy weapons could be used as infantry weapons by something larger and/or stronger than a human?

Let's take the M2 Browning, or, rather the .50 Browning round it fires. The amount of armor steel each round can penetrate is impressive - it can blow through brick/cinderblock walls and cut down trees with ease. Its lowered rate of fire in comparison to actual handheld infantry weapons is negated by the fact that the round it fires is big, and since the round is so massive in comparison to smaller ones, its energy falls off less quickly than them. Moreover, its high ballistic coefficient (it slices through the air more easily) means that it doesn't get blown off course as much as smaller rounds. In short, it's a very powerful weapon.

The problem is its weight.

A cursory Google search reveals that its weight, even without ammunition or its tripod/traverse-and-elevation mechanism, is 36 kilograms. On average, its ammunition is about 100 grams per round; if this hypothetical M2HB-wielding soldier wants to carry 100 shots, they're going to have to cart around about 10 kilos of ammunition, as opposed to ~1.23 kilos for a soldier armed with something that fires 5.56x45mm NATO who wants to carry the same number of rounds.

Additionally, there's the recoil. The Wikipedia entry for the .50 BMG cartridge states that its bullet has a mass of between 42 and 52 grams, and a muzzle velocity of between 860 and 928 m/s. Even assuming that the M2HB fires rounds that weigh 42 grams at 860 m/s, and not more, which I personally find somewhat unlikely, considering its impressive barrel length, the M2HB's Wikipedia entry, and the fact that those velocity and mass figures are not from the same round (they're the smallest ones I could find for a .50 Browning round), this recoil calculator gives me a recoil of 5.87 feet per second. If I swap in the largest velocity/mass figures I can find for a .50 BMG round, I get a rather-chunkier 6.96 feet per second. In comparison, even the largest figures I can find for a 5.56x45mm NATO round fired out of an M-16 gets me a 2.98 foot-per-second recoil.

The M2 is also just used for the purposes of reference; think about everything, from anti-tank missile launchers and recoilless rifles to miniguns and flamethrowers that don't work as human infantry weapons but work for larger entities.

If you need a specific entity for the purposes of answering this, imagine something that's 9 feet tall and 240 kg/529 lb, and comparable to an Olympic athlete in terms of physical capabilities related to weightlifting, physical endurance, or stamina. It can be mechanical or biological - it's just being used as a reference for the purposes of measuring how its increased size/strength relative to a human effects its ability to carry big guns.

One of your best options would be a GPMG, that is handled by normal humans like this:

Could be handled by a giant like a normal rifle, with a foregrip & full length stock. You could even give it a heavier barrel. The reason for this is that your giants are still at the size where a HMG would be heavy enough that it would be already 1/6th of the giants body weight, not leaving it with enough carrying capacity for other things; where as a GPMG modified to be a bit heavier would only be 10-15kg vs a HMG on is own is already ~40kg. The HMG would probably be better used as something like a platoon level machinegun for the giants rather than a standard weapon. 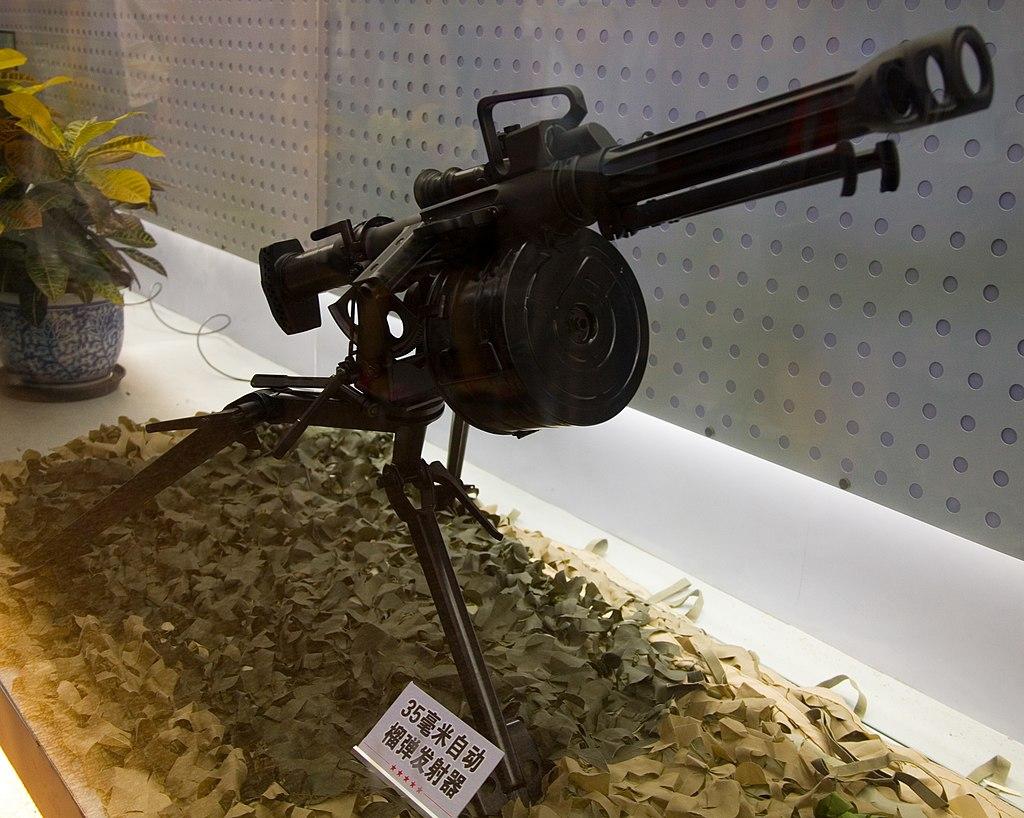 Far easier than a normal human could without having to use a bipod or tripod. With the ability to carry a decent amount of ammo for it without an assistant like you would need for normal humans. As well as with a normal stock rather than just a metal stick out the back, as a normal stock would probably be to big for a regular person to use effectively.

Armor. Body armor worn by human soldiers is limited by weight, which is why they wear vests instead of covering their whole body. Kevlar practical for humans to carry around is only bullet-resistant, not bullet-proof. Ceramic plates take one hit and are then useless. If you could carry around double-thick Kevlar everywhere on your body, you'd be well protected against small arms fire.

There are two groups that really want new, different and exciting firearms available for troops - gun fetishists (because new guns are COOL) and firearms manufacturers (because new guns mean big contracts). What the military actually needs are reliable weapons that are easily maintained and resupplied.

There is little need for increased lethality - poachers have killed elephants by shooting them with enough 7.62 x 39 ammunition, let alone the more powerful 7.62 NATO. Even if the new, improved 9 foot tall supersoldiers become standard, it's hard to believe that they will be tougher than elephants. As for the increased range of the .50 BMG or other rounds - most infantry engagements are at very short range. If the enemy is many hundreds of metres away then it is safe and desirable to hit them with mortars, artillery and airstrikes.

Therefore, go back to the good old FN-FAL in 7.62 NATO. The L1A1 SLR semi-auto-only version used by Britain, Australia and other countries was extremely effective (speaking from experience - it was the first service rifle I was trained on). The reasons that the FN-FAL and its variants were ditched in favour of small-calibre bullpups were:

None of these factors apply to 9 foot supersoldiers - they are strong enough to handle the recoil, they can carry as much or more 7.62 ammo as a normal soldier can carry 5.56 and compared to the issue of fitting themselves into an APC or building, the rifle is trivial. (The FN-FAL could be rebuilt as a bullpup if length is somehow an issue, but the advantage of being able to fire from either side of cover without ejecting cases into your face makes it worth keeping a conventional layout if possible.)

(Speaking of room clearing - unless every building on the planet is scaled up to accommodate them, the 9 foot tall supersoldiers probably need to stay outside and let the normal soldiers clear the buildings. Otherwise it will be like an adult trying to squeeze into a child's cubby house.)

Follow the same principle with everything - don't scale weapons up, just have the big soldiers carry more. Hand grenades, for example - you don't want a more powerful hand grenade because that means a bigger danger radius and they need to be usable in close quarters. Instead, let the supersoldiers carry more of them (and remember to increase the diameter of the safety pin ring so their big chunky fingers fit in). Ditto for Claymores, radio batteries, 40mm grenades, anti-armour weapons...

However, just remember that the square-cube rule is not your friend. Smaller organisms can carry a greater proportion of their body weight. Unless the supersoldiers somehow have a much more efficient metabolism, their increased carrying capacity will be required to carry the increased amount of food and water that their bodies require.

Mounted weapons could instead be carried by the giants. 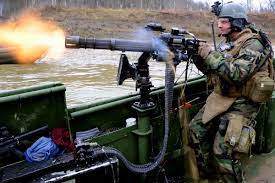 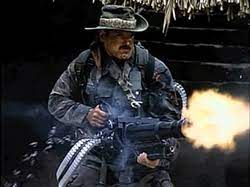 A fine example is the use of the M134 gatling gun or "minigun" as a handheld weapon in the movie Predator. The real M134 is mounted to absorb the recoil, and requires huge amounts of ammo as well as a dedicated electrical supply both of which are heavy. It was awesome has a hand held weapon in the movie Predator but required modifications to the gun as regards rate of fire, ammo used and also suspension of disbelief to work.

Old Painless, which, like the rest of the weapons in Predator, was supplied by Stembridge Gun Rentals, was custom-built for the film... The weapon was fitted with the handguard assembly from a full-size M60 machine gun..., installed backwards under the M134's barrels, as well as a rear pistol grip taken from normal (at the time) Minigun spade grips, attached to the weapon via a custom Y-frame with an M16-style carry handle that mounts to the weapon's recoil absorbers.[3] A special harness was also created, transferring much of the weapon's considerable weight to actor Jesse Ventura's (Blain) shoulders.2 Additionally, the weapon had its fire rate drastically reduced from 6,000 RPM to 1,250 RPM, partly to make the recoil manageable for Ventura, partly to conserve ammunition (even at the reduced rate, the ammo canister linked to the gun could only hold 4-6 seconds of usable ammunition)... .[4] The M134 also requires a significant amount of electrical power to operate; in the film this power source was external, consisting of cables that plugged into the Minigun and lead down Ventura's pants leg and along the ground to off-screen batteries. These were only attached for shots where the weapon is fired as the actor could not walk when they were installed.

Your giants could withstand the recoil, carry the ammo and carry the battery pack. You could extend this principle to other heavy weapons that in current forms require them to be mounted and/or crew served. The giants in effect become a vehicle.

There is a long list of these heavy weapons and you can choose whatever works for your story. Add giants for extra awesomeness! I like the idea of the giants carrying a WW1 style artillery piece like a battering ram and firing it straight ahead. The giants all slide backwards in their tracks from the recoil.

Not the answer you're looking for? Browse other questions tagged weapons military combat or ask your own question.

1
Reducing human military capability
1
Destruction of modern suburbia by railgun
78
What (modern) weapons could be used to destroy skeletal enemies as completely as possible?
25
Could a 19.25mm revolver actually exist?
1
Dragons are supposed to have a "smart" breath weapon. How could that work?
5
Recoilless Rifles vs Bazookas against non Mechanical Targets
4
Could missiles replace guns at the personal level?
3
Realistic Rounds for Penetrating advanced body armor? A round for standard infantry against nano-machined ceramics
2
What kind of support forces would accompany a one-noble armored fighting vehicle into the mountains on a propagandized anti-insurgent mission?