What effects would discharge of high-voltage supercapacitor through one's hand cause?

I'm trying to figure out what effects would this have on hand. Let's assume that we touch contacts of said capacitor with thumb and index finger of the same (dry and pretty clean) hand (but I'm also interested what would happen for other combination of fingers if it differs significantly). From what I know about supercapacitors, resulting "circuit" will have the following characteristics:

As for capacitance of supercapacitor, let's say that it's 1 kilofarad (perhaps it's an entire battery of them connected in parallel?), which is quite a lot. It also was charged at 1 kilovolt.

I've tried to look up relevant information about this, but almost all sources talk mostly, if not only, about dangers of AC current going through heart, which is a most common scenario in practice but totally inapplicable in my case where DC current goes only through small part of body. Those that talk about other effects of electricity on human body, mention the following additional dangers:

I've probably missed some here since, as I said, this seems rather hard to search for (probably a good thing in a deeper sense, honestly). So, what effects on hand/body would this have?

Normal mains-voltage (240/110 volts) is easily sufficient to cause a shock, that's unpleasant and potentially somewhat dangerous, but because of the resistance of skin which can be anywhere between 5KOhms to several million Ohms, the current flow is usually insufficient to cause any tissue damage.

The skin's insulating ability is the body's greatest protection against shock, the standard voltage thought to be sufficient to breakdown the skin's resistance would be 500v, now 1000 volts would likely cause fine puncture wounds in the surface (at first, they'd spread fast) which would then allow high currents to flow within the tissues itself causing tetanic contractions of the muscles (and as it's direct current, a grip you can't let go), heating, carbonization of channels through the flesh and the flow of very large currents, eventually eating away through the flesh creating a crazed fractal pattern: 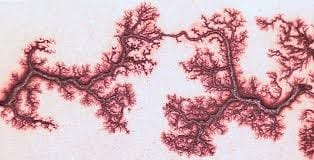 This would take no more than a few seconds. A Kilofarad capacitor charged to 1000v would discharge pretty fast - so the outgasing might be quite dramatic, and you would see the skin glowing orange as it carbonized. This video illustrates, though it's a low current source, the effect on flesh would be faster and more dramatic, and glow brighter (though I've not tried it myself, there'd likely be many small jets of flame-like plasma after the initial steam).

The flesh would lose integrity and tendons would detach, or finger joints allowing the hand to be pulled free. There would be lots of permanent damage to flesh, sensory nerves and muscles of the forearm.

It's possible, maybe just possible, that if the person who's hand touches the electrodes has engaged in lots of manual work and has very thick skin - like a builder or even gymnast, that the skin will be thick enough to prevent breakdown for a while, meaning, if the skin is dry there'd be a painful shock and tetany (and gripping if they were unlucky), but they might get away with little more than a pain memory.

If there were gripping, they might have several seconds or even minutes to cut the current/free the hand before the skin did break down (which it would do eventually).

As a former electronics hobbyist and electronic component collector, I can say from experience that much smaller capacitors can be quite dangerous, because they are suitable for high voltages. Even with normal consumer elco capacitors, like the the ones used in back in the 60's for TV power supplies. Capacity of these elco's ranged from 100 micro Farad to say, 0.01F for the really big ones, voltage max e.g. 400V. Triodes and Pentodes were involved, that's why they were made for this voltage range. These capacitors could become quite dangerous to handle, when loaded up with the TV's power supply.

In a supercapacitor, which could be 100-200 Farads, you could store lots of Coulombs charge. But generally, the max charge voltage of these components is very small, yielding much lower energy content. High voltages cannot be used, because that would pierce the dielectric surfaces in a supercapacitor. It would be huge size.. or special technology. The discharge voltage would be equal to the charge voltage and as a result, touching the electrodes does not have grave consequences.

I can refer to another answer. For supercapacitors, most common is 2.7 Volts.

Supercapacitors allowing for higher voltages are very rare and expensive. I found below one, it is 130F and it can handle 62.5V. A voltage like that would certainly be felt on the skin, but it will not kill you. And look at the price of this baby..

If higher voltages would be allowed, supercapacitors would replace batteries immediately ! They are much more durable than batteries, a capacitor can be charged millions of times, a battery cannot. For backgrounds,

I could say a lot, but if an image is worth a thousand words, then a video is worth a million.

Here is a guy playing with four supercapacitors each rated at 2.6 kilofarads - so 2.6 times over your specs. 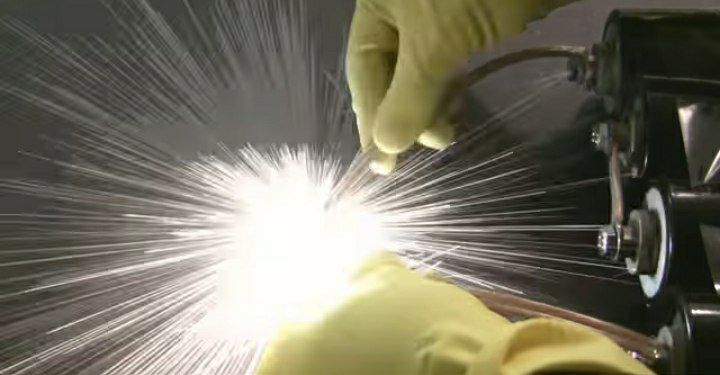 That was a nice coin

If you short one of those that is fullly charged, you get some sparks that look like what you get while soldering iron - nice stuff, could severely burn your hand and wrist maybe to 3rd degree, but nothing cinematographic. With four of those in tandem, though... watch as the guy connects those to random stuff, including a circuit board and a dime. Now that's where the fun really begins!

2
Would a person with high voltage outfit (or skin) be able to fly?
3
The Sleepless City
6
What would be the immediate effects of no electric current?
1
What would be the effects of losing the ability to dream?
6
What environment would be required for a species that communicates through electrodes?
4
Electrical grid based on devices in series using constant currents, not devices in parallel using constant voltages
9
A character suffers little to no injury from channeling electrical energy. What would voltage and amperage feel like?
0
Can someone with a better understanding of physics review or correct my design of a hypothetical fusion reactor for space vessels?
5
Whale-sized electric eel shock?