Why would a modern (well funded) military use technical & motorcycle based units?

Why would a modern, well funded military use mainly technical and motorcycle based units? They would be used alongside normal units. They are mostly intended to fight conventional warfare against well equipped opponents, but are often deployed in Counter Insurgency warfare. (Although, if it's not at least somewhat useful in conventional warfare, this military wont put money into it.) They have integral light tank & motorised infantry support like the soviet motorcycle units of WW2. Strategic airlift isn't of concern as common use of large ekranoplans making it relatively easy to get heavy forces around the world quickly; but tactical airlift is still difficult enough to be relevant. The technology level is near future but warfare hasn't changed that much.

(Note: no "drones make everything else obsolete" comments, the swarm is everywhere on the internet & its wrong due to reasons i can't explain without making this question twice as long)

Because they live in a location with poor quality roads or no roads, and lots of hills, mountains, and swamps.

Heavy vehicles like tanks can go through a lot of rough terrain, but they have a real problem with damp areas, and steep hills.

This military mostly operates in areas like that where tanks can't get around and sink into the mud a lot. Light motorcycles and vehicles find it a lot easier to move around in the few roads and poor quality paths.

First of all, "technicals" are any non-standard vehicles, most often civilian vehicles, that are converted to light fighting vehicles. This can be anything from a car that carries infantry to battle to trucks with artillery or anti-tank canons mounted on top. So while the Toyota war has given us the idea that a technical is a weaponized pickup truck it is actually broader than that.

Technicals are in use in Russia for example as support squads. I'll be using "technical" for a variety of civilian vehicles repurposed for warfare, from ordinary cars to trucks. Lets put some things in a row:

With that in mind such vehicles could be used in an extended war of attrition similar to WWII. After most costly and hard to produce cruise missiles, JDAM's and other munitions are depleted while access to the wide variety of required resources are cut or limited, you are going to need cheap and easier to produce vehicles.

The French for example had great success with an armored car mounted with a variety if weapons including a 90mm canon (the Panhard series). Which due to it being purposefully produced no longer counts as a technical but it is an indication of the potential that technicals can have.

While your (remaining) main forces create frontlines and area's that can't be easily penetrated your army of technicals and motorcycles will engage in maneuver warfare. They use their speed and mobility to pass through any opening in the frontline, such as after your forces have attacked the enemy frontlines. Then they seek out the vitals of an army: supply lines, command and control centers, communication equipment, radars, anti-aircraft sites, depots, specialist personell such as those that maintain tanks and perhaps even daring raids at production facilities before returning, possibly destroying their own vehicles when they run out of ammo and gas before receiving new sets of vehicles.

Otherwise such vehicles could simply create mechanized infantry regiments from regular infantry. The added mobility and firepower is useful at most points in time, especially if your armies are restricted by resources in the amount of advanced vehicles and weapons they can create.

Motorcycle troops do not intend to fight.

The electric motorcycles they ride are whisper quiet and the special forces that ride them use night vision. The motorcycle troops infiltrate deeply into enemy territory, riding cross country and zipping unseen up the roads.

They are individuals with special skills who cross enemy territory to perform specific functions. These are saboteurs who come in, plant bombs and leave. They are assassins and snipers who take out high value targets either personally or via traps and devices. They are scouts who reconnoiter and return, or receive intelligence from spies, or install themselves to mark targets with invisible lasers.

The majority of casualties suffered in modern warfare are as a result of fragmentation / blast weapons.

The vehicles described provide zero protection against these types of attack compared to armoured personnel carriers (APCs) or even more lightly armoured vehicles such as the Humvee and Bushmaster. Yes, a direct hit from a 105 mm howitzer will destroy an APC as easily as a technical, but the more likely scenario is a 105 mm shell impacting or airbursting some tens of metres away - the APC will protect its troops from the fragmentation but troops in technicals or on motorbikes are unlikely to survive.

Another reason for using conventional armoured vehicles is their capacity to evacuate casualties and allow them to be laid prone and effectively treated with some protection. This is very difficult at best with a technical and impossible with a motorbike.

There are some uses for technical / motorbike-mounted patrols, such as long range strategic patrols conducted in desert areas. However, this only requires a relatively small number of troops from an army.

In short, without the specifically excluded constraints of financial limits, military production limits or strategic shipping limits there is no reason to equip the majority of infantry units with these vehicles in a universe where fragmentation weapons are the primary threat.

During the Cold War, some military writers in West Germany worried about WWIII starting by a misunderstanding with conventional forces. So one proposal (that never went beyond professional journals, to my knowledge) was to put structurally defensive forces on the frontline, with heavy mechanized counterattack forces further back. Those defensive forces would have a high proportion of ATGMs, light MRLs, and some infanty to fight a delaying action. The Unimog would have been used to carry various systems.

It was acknowledged that these forces are somewhat less efficient than heavy mechanized forces in a general war, but more suitable for a stable deterrence.

In remote areas (as Nepene Nep points out) large millitary vehicles would perhaps not be practical. They would also be a rather conspicuous sign of an attack being imminent.

If some, with the right language, accents clothing and papers, can make their way to intended targets under cover of looking for work or attending a funeral of some long lost friend or other excuse. Motorcycles have the virtue of being easier to hide than larger ones and thus escape detection. Rural areas with targets (electric power-lines, gas, water supplies, food reserves) can be interfered with. Water supplies can be cut or tainted with disease/hallucinogens for extra effect.

This can be done as a coordinated effort to destabilize the civilian population in areas surrounding military targets, to put a greater strain on military resources in an effort to repair/prevent such things happening again and to create a burden on their healthcare and food resources. Or if you get lucky or plan well, cut the resource supply chain to the military-base itself - they're sure to have backups, but those will be limited.

In an occupied country, they might be of use to any resistance that you might wish to offer support to.

Because, it can be so much fun (until the shooting starts).
Trailer with extra munitions optional.
France, paratroop use, Algiers :-( 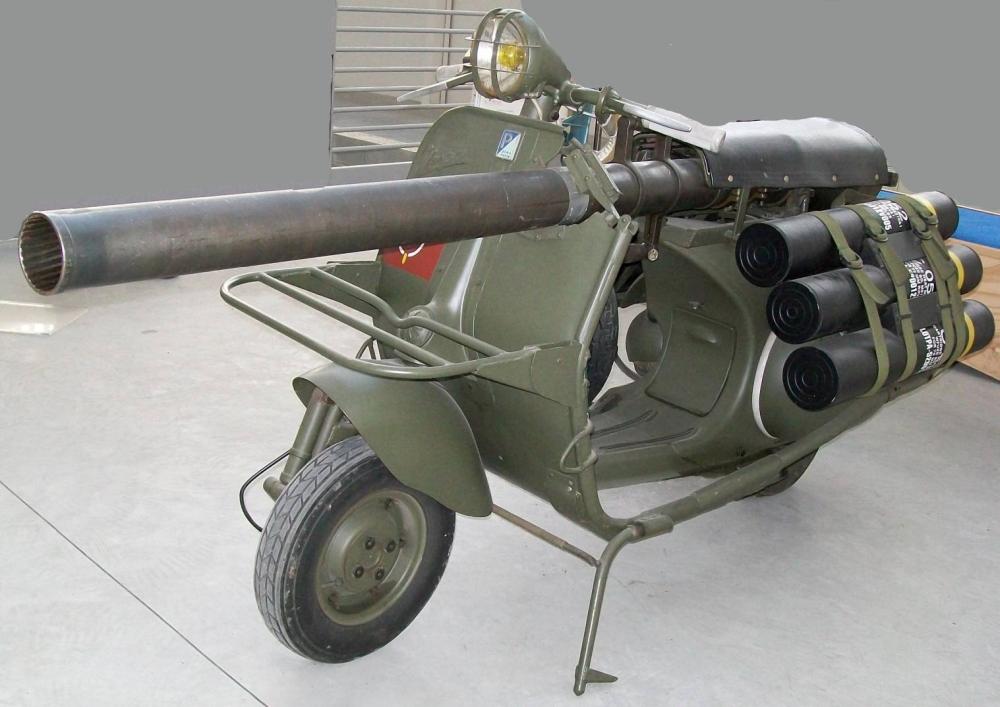 Not the answer you're looking for? Browse other questions tagged warfare near-future .

14
In a world with very common wizards, how would the military use them?
3
What choice of magic arrows would be most useful against modern military
46
Would modern age military skills be useful during the crusades?
12
Would submarines be well defended from space based lasers? What about railguns?
2
In this universe with these technologies would HUMAN infantry still be useful for the military?
9
Aside from scouting & message delivery, what roles would sapient parrots fill in an Early Modern military?
2
Why would a military use hybrid jet-propeller planes?