How far down into the ground is it practical to build?

How far into the ground is it practical to build? While cities go both up a lot & down a lot the down is mostly infrastructure, with nothing like houses, shops, factories, etc. down there. So how far down would it be practical to have humans inhabit. The technology level is near future. It doesn't have to be economically practical but it does have to be practical enough to get a government to build it in a semi-centrally planned economy. (The government allows corporations to exist but can do anything a corporation can as well & has enough money to put down as many subsidies as it wants) It would be preferable to have a solution that doesn't eliminate building significantly up as well. It doesn't have to resemble how things are done above ground but it shouldn't be a problem from people to move in from the surface without issue.

Edit: when i say practical i mean practical in an urban planning sense

It is almost always more convenient and cheaper to build cities on the surface rather than underground. However there are examples of extensive underground habitations that could be classed as cites such as the one in Montreal Canada which in part was built to provide some protection from the winter weather: https://en.wikipedia.org/wiki/Underground_City,_Montreal This is only a few tens of metres below the surface.

If finance is not a restriction then it would still be more convenient to build near the surface purely because that is where existing infrastructure, agriculture and transport links are most likely to be.

If you are determined to build further underground then it would certainly be possible. But the deeper you go the more expensive and less practical it would become. Within a few hundred metres of the surface it would range from a novelty to rather inconvenient nightmare.

Below that the difficulties would mount rapidly depending on the nature of the ground. Such things as ensuring that the structure was resistant to water pressure, the removal of waste heat, circulation of fresh air, lift capacity and stability to earthquakes.

Down at a thousand metres below the surface building a city would be totally impractical if not entirely impossible. Only deep mines exist at these depths and temperature becomes an increasingly difficult problem. The deepest gold mine reaches more than 4000m below the surface but has a rock surface temperature of 66 degrees C. Men can only work in such mines due to the use of thousands of tons of ice and forced ventilation on an epic scale. Even when cooled by such means the temperature is still around 30 degrees C. https://en.wikipedia.org/wiki/Mponeng_Gold_Mine

https://www.groundworkscompanies.com/about/articles/how-far-underground-are-skyscraper-foundations/ image edited by me.

Subways can be as deep as the foundations of these huge buildings.

But if you think these stations are rather like descending to hell, they are nothing compared to the Arsenalna underground station in Kiev (Ukraine). Its escalator will take you down to the centre of the earth in order to get on one of its trains, which run more than 100 metres below ground. It is the deepest underground station in the world.

These structures built for humans are puny in comparison to mines. Mines are more than ten times as deep, and really big. 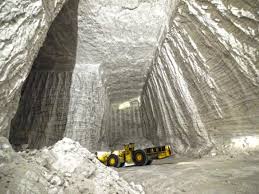 At 2,300 feet, the mine is the deepest in North America. That's deep enough, Wilczynski notes, to nearly stack two Empire State buildings, which has a roof height of 1,250 feet. The mine shaft is at Portland Point, on the eastern shore near the south end of Cayuga Lake, and the mine itself stretches north along the lake to a mile past Taughannock Point, the company's website says.

The mine stretches more than seven miles underground, tapping into a vast salt deposit that stretches from Pennsylvania to Ontario.

The deepest mine in the world is the Mpoeneng gold mine, which is working on becoming 4300 feet deep.

In sum, it looks like the deepest structures purpose built to house and move humans are 100m / 300 feet deep. Mines, though, are built because of different practicalities - miners are retreiving things that are underground and so go much deeper to where those things are. The farther down you go the trickier ventilation gets, but there is no reason why a city cannot use old mines that happen to be convenient for expansion - both Paris and Kansas City do.

If You not count economic then main problem will be temperature. Oxygen can be solved by hydroponic, electricity by nuclear/fission reactors. But temperature - heat is in and is produced and need to be taken out to somewhere. In average earth temperature rise 1' per 33m.Some places per more than 100m some even 1' per meter. In average on equator You need lots of cooling devices to have comfortable temperature even if close to surface. At Europe can dig up to 400-500m before need cooling. At South Pole can go down for 2000m with only basic devices. That may be bigger problem if put some heat emitting devices like generators or computers on same level as humans or even close to them.

You can have some of the advantages of an underground city by building a multistory surface city inside one large building. Thus the entire city can be covered by a roof designed to keep out danerous levels of radiation, for example, and people will not have to go outdoors and face the bad weather if the entire city is inside a single building,etc.

Not the answer you're looking for? Browse other questions tagged near-future cities construction or ask your own question.

17
Self-sufficient Ark
13
How could a monarch rule in a vast, isolated, medieval city
4
How to build a tower that reaches dozens of miles into space
20
Living in a Giant Swamp - Construction
12
Calculating City Size based on Population
18
How quickly could a country build a tall concrete wall around a city?
16
How long do you think advanced cybernetic implants would plausibly last?
3
How to design and build a fortified compound in a 12-hour daylight period?
2
What would a perfectly planned capital look like in a world with space travel?