I'm waving hands a fair bit here, and I am doing that because I believe that it is internally coherent, so if you accept these things, you shouldn't need the story to suggest answers. I'm including as much information as I think is relevant, but trying not to give more than is helpful to answer the question... Hopefully I did ok, lol. So...

There exists a species of creature that travels through spacetime by manipulating multiple dimensions. This creature was spawned into the three spatial dimensions on a near-mid-Miocene-Earth, matured into more dimensions, and left once mature. Like a salmon returning to its spawning grounds, the creature has returned, and is pregnant.

When this individual returns to spawn, it finds the current climate unsuitable for spawning, and so it engages in "nesting" behaviors that would result in a return to a climate more like the one it was spawned into.

I have posited that some nesting behaviors of such a creature may include triggering continental drift to change wind and temperature behaviors (like the ones that made the plains and deserts, the seasons and trade winds of today), similarly to contribute to seismic activity, to both trigger volcanic eruptions as well as earthquakes which could shift carbon deposits to the surface where they could be returned to the atmosphere more easily...

How could it make sense that the creature causing earthquakes, moving the continents, and changing the winds could also affect the perception and behaviors of the creatures alive on the planet?

What abilities might such a creature have that would cause animals, including and especially people, to engage in behaviors that would potentially cause disruptions (maybe like war, drilling, industrial manufacturing, making a lot of plastic, burning fossil fuels, etc.) that would potentially accelerate the nesting (that is, shift the climate towards a mid-Miocene-like climate) less directly than blowing up a megavolcano (like what occurred in the mid-Miocene).

I've thought of things like the fungus that causes ants to climb up high and hang on and then explode into spores, creating conditions suitable for its reproduction - and the brain parasite that reproduces in the digestive tract of cats causes mice to be less afraid but makes people more likely to be in a car crash, and even the extra-hand-wavey direct psychic manipulation.

NB: This entity should not be overtly malicious, it's just trying to make its nest, it is intelligent, but is either unaware or otherwise uncaring about the fate of the other inhabitants of the spawning grounds (in this case, Earth) in the same way the aforementioned salmon would be unaware or uncaring about what the other fish in the river are doing - they're either food, competition, a means to an end, or completely irrelevant.

Thanks for sharing your thoughts!

Absolutely nothing... or just add lead

If the Great Old One is changing climate patterns to increase desertification and Earth technology is unable to locate / identify the culprit due to its 11 dimensional nature then no further action is required to get humanity to make things worse. Given the responses by some sectors of human society to COVID-19, the sequence of events will go something like this:

However, if relying on normal human behaviour is too passive for the Great Old One, then distributing particulate lead (Pb) into the atmosphere will have serious effects on the mental capacity and stability of humans and (presumably) other animals. Lead poisoning is immediately detrimental to the brain before other organs, with disturbing long term effects postulated in the lead-crime hypothesis.

With regard to animals, lead can be used to disrupt ecosystems. For example, birds are notably vulnerable to lead poisoning, especially birds at the top of a food chain. Combine lead poisoning with plagues of mice or rabbits and the avian predators best able to combat the plague will be the first to die. (The linked articles are for Australia but the principle holds true elsewhere.) The brains of animals that don't die of lead poisoning are likely to be negatively affected in the same way that humans are.

TLDR - human stupidity and social media use can probably be relied to make things worse on their own, but adding lead will make both us and animals react even more stupidly to the crisis.

The Earth is a bower. 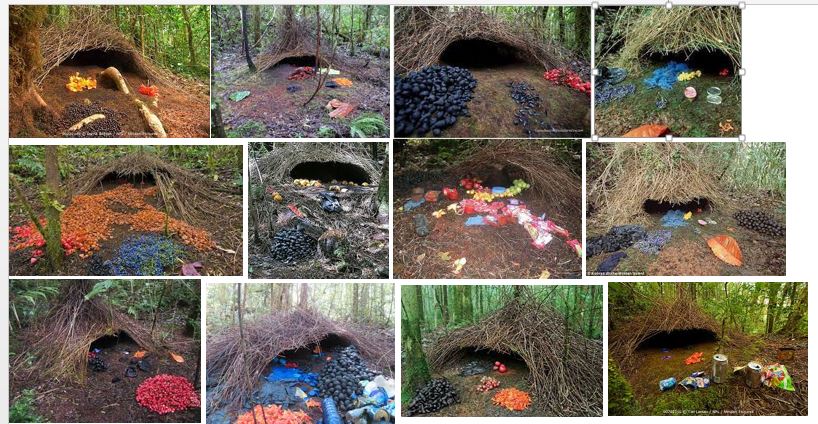 Consider the bowerbird. Here are bowers made by the Vogelkop bowebird. Each is made by a male to impress the female with his art. They are different but not radically so. The bowerbird male knows what a bower should look like. He knows the general color scheme that the ladies like. And then he improvises with materials he can find, and his own aesthetic sensibilities. He is moving towards a pleasing end result and he is flexible and creative in his methods.

Your multidimensional creature is making a bower out of a planet. It is flexible in how it accomplishes this. It needs to be a certain temperature but that is just one crude aspect - there are many, many other aspects, some of which human minds cannot get around. These creatures have godlike powers to affect planet inside and out, the creatures on it from microscopic to macroscopic. They can influence and change variables we did not know were variables. Your creatures do not just do one thing and get the end result: heat. It is like saying the bowerbirds make a mound of hay and a pile of stuff. The whole thing is meticulously arranged - for the birds and for your deity-level creatures.

It is doing it to impress and an artfully accomplished end result is more impressive. The Miocene earth bower worked well and reproduction happened. The current creature might be the same one as before, or its descendant and it is making another bower. It will work with whatever is available and in the present there are new things. Given the chance, real bowerbirds will readily incorporate man made items if they are the right color and shapes. In some places bowers might be decorated entirely with plastic. Your multidimensional creatures readily accept the human occupants of Earth as participants in the construction of its bower. Unwitting participants. The creature can influence humans and society in many ways and on many levels all with the same end goal: the beautiful bower.

It's the magnets, baby

This creature can not only sense magnetic fields directly, it can interact with them directly.

So, it experiences the planet as a solid surface above which lies a dense atmospheric soup, upon which is super-imposed an even deeper soup: the planet's magnetic field.

It is driven by deep-seated instinct and powerfully-felt urges (which it may or may not recognize as such) to create a comfortable space within this environment.

Imagine cleaning a standard metal kitchen whisk. A lot of whisks are constructed of a series of identical, long, metal loops, rotated around the implement's long axis: 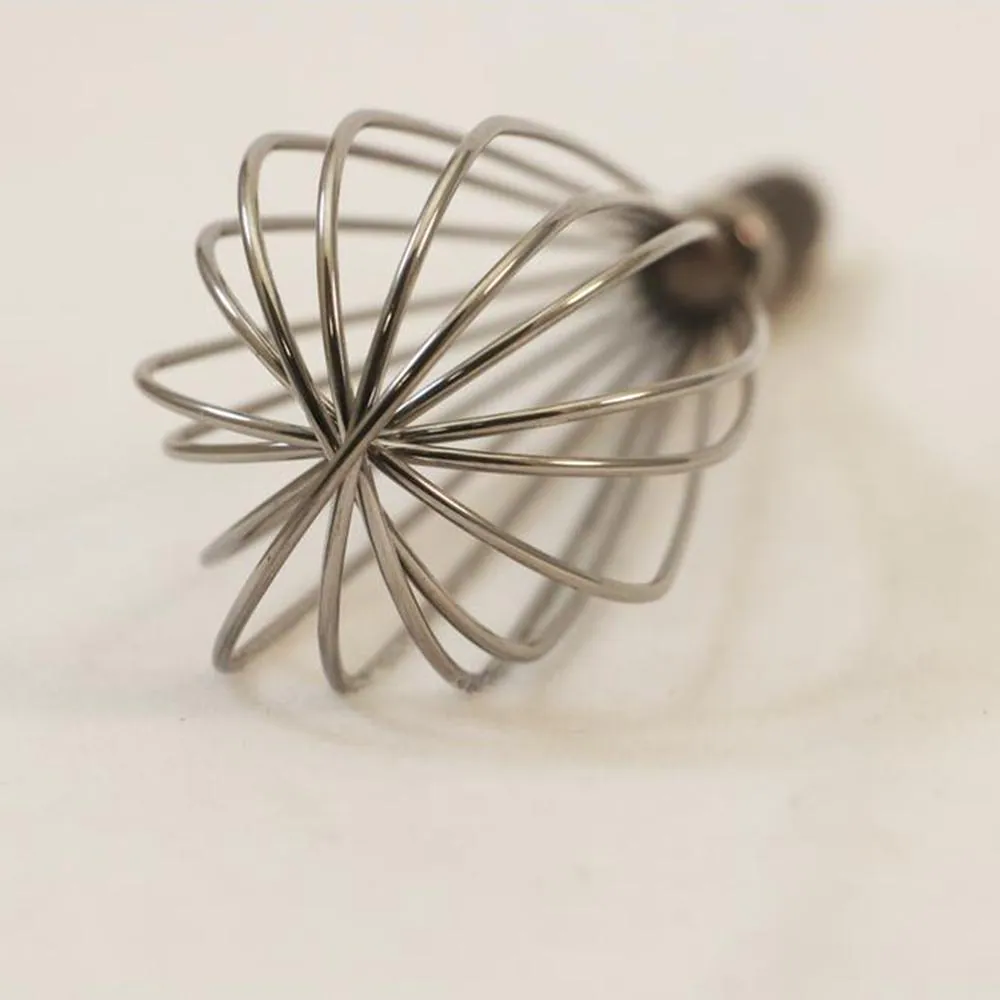 You can grab some loops and push them to the side to clean them (although they spring back once you let go).

That's kind of what the planet's magnetic field is like for this creature: first, it pushes some loops out of the way so it can descend to the planet's surface, where all nice warm soup is; the loops spring back into place. Then it starts pushing loops around, holding them in place with its strength and bulk, to set up a comfortable nest. This has some interesting effects:

Not the answer you're looking for? Browse other questions tagged science-fiction climate alternate-earth spacetime-dimensions climate-change .

7
How would a large arctic mountain range affect the weather?
6
What adaptations would be advantageous given a regular, but extreme variation in climate?
8
Why would a five dimensional creature need memories?
4
Climates of a Eurasia-like continent in the tropics
3
Is this fictional habitable exoplanet of Alpha Centauri A realistic?
6
How plausible is this volcanic eruption event? Dark Age without total extinction of Stone/Bronze/Iron Age people?