Can ferrets substitute for cats as mousers?

House cats are among the oldest domestic animals on Earth. They basically followed domestication of cereals in the Middle East; mice infiltrated human habitation to eat the stored grain, and cats came in to eat the mice. To this day, house cats behave, unlike other domestic animals, as though they are guests who came in of their own volition.

I'm writing about a world that can be considered an alternate Earth, where there is a civilization rising in an area whose biome is a mixture of prehistoric Europe and America. It turns out this biome does still contain a wild cereal that seems suitable for domestication: https://en.wikipedia.org/wiki/Aegilops

But it does not have house cats for when mice start eating the stored grain; it has the American bobcat, but that is not suitable for domestication.

So what to do about mice? Maybe they need to invent mousetraps early, though will mousetraps work in a grain storage building where the bait will be swamped by the local abundance of food?

Or: ferrets are native to Europe and America, and they eat mice! And they have been domesticated. But reading about ferrets, everyone talks about their use for hunting rabbits, but there doesn't seem to be a whole lot of discussion about their value in eating mice. Is that because ferrets have some disadvantage that I'm not aware of? Or is it just that this job in our world was already being satisfactorily done by cats, and ferrets would be valued for it in the absence of house cats? 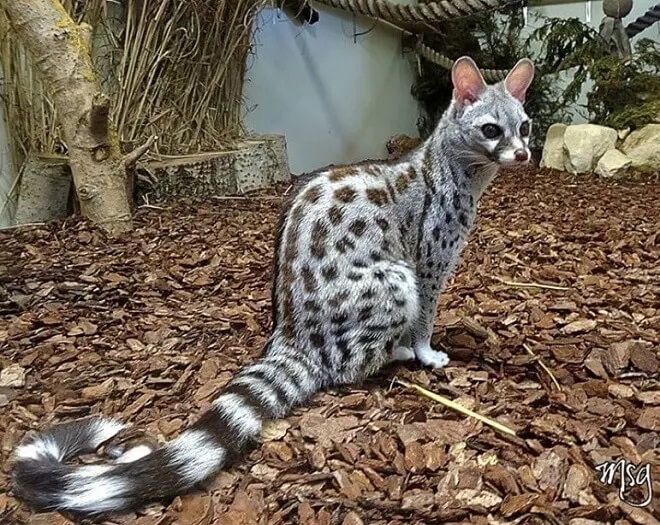 It was brought to the Mediterranean region from Maghreb as a semi-domestic animal about 1,000 to 1,500 years ago. It spread from the Iberian Peninsula to the Balearic Islands and southern France.[9] In Italy, individuals were sighted in mountainous areas in the Piedmont region and in the Aosta Valley. Individuals sighted in Switzerland, Germany and the Netherlands are considered to have escaped or been released from captivity.[10]

Genets are not felids or mustellids but viverrids - mongoose family. I read that the genet came to Europe with the Moors and was favored by them for its mouse and rat killing abilities. It has largely been displaced by housecats but some people still keep genets as pets. They are much more beautiful than ferrets and their semi-arboreal nature would be great for a fiction.

Not the answer you're looking for? Browse other questions tagged science-based reality-check alternate-history fauna domestication or ask your own question.

14
What makes an animal suitable for domestication?
2
Can swine be used as beasts of burden?
21
How could cats evolve toxic claws?
2
Marine Animals best suited for domestication?
5
Can fallow deer be used for milk?
10
Does charcoal fully substitute for coal except in quantity?