How many notes can devils play with their horns?

Everyone knows the trope of horned humanoids with a pointy tail on their back and two horns in their head.

''It's just not a person with a tail and two horns, it's something completely new and inhuman! believe me!''

Dungeons and Dragons has them, pretty much any fantasy Japanese cartoon or comic has them, same for European fantasy books, video games have them and sometimes even movies. They come by an embarrassing amount of different names but let's just call them Devils. The idea of their physical features offering more than just a cheap fetish is intriguing me. I want my devils to play their horns.

The horns evolved from hollow over-calcified keratin spots overgrown in the head, firstly the devil horns were kind of gross and randomly shaped but slowly they developed into more appreciable shapes aesthetically. The first horned devil was a guy like the Great Khan of our world, that famous mongol guy who killed, pillaged and raped such a huge amount of people that nowadays a good chunk of humanity shares his DNA. Thus, horned humanoids truly are in a sense devil's children. A few hundred generations forward, devils with more aesthetically pleasing horns where selected and some of them born with uneven or malformed bony structures had their horns and their airways connected creating an air chamber and tubes similar to those of blowing instruments, with the air coming from the mouth passing through the horn then bouncing back and existing by the nose. Obviously making music without any instrument is appreciable, and the same way children used to have their genitals mutilated for the sake of music, devils were forcefully bred for their horns.

I do not know anything about music, all I can do is play a dozen songs by memory on the guitar and piano but I've never understood the theory no matter how many times it was explained to me, all I can do is follow sheet music and memorize it.

Hence this question, can they produce only one type of sound and need more holes to be cut in the horns to allow for more notes? Or can the mouth and lung systems be used to create different sounds and notes inside the horn regardless of it's lack of holes? Does the material of the horns make a difference in the amount of possible notes, probably the answer is yes, but is it a big difference?

The idea started from imagining devil horns being similar to the parasaurolophus horn, which as far as I know was not the smartest animal and even if it was possible to use such horn as a musical instrument, well they didn't know music theory and they weren't as smart as modern birds, plus the description of dinosaurs changes every 5 years or so, so they aren't the most believable of sources, but still a cool idea. 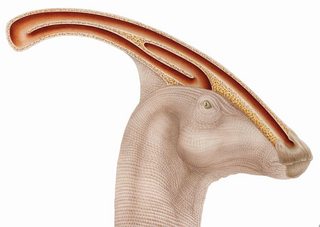 I'm going to jump in having blown enough air into a woodwind.

For a flute type horn: Wind instruments make sound by creating a "standing wave" in the instrument. For example, flutists make sound by blowing over the hole which starts the vibration and the rest of the flute shapes the wave. The length of the flute and where a hole is open determines how long the wave length is and that determines the pitch. The shape of the inside of the instrument determines what kind of harmonics and thus the "tone" of the instrument. (For example, the inside of a recorder is tapered while a flute is straight and that is part of the difference in the sound between them.)

So, for a horned creature to play different notes on their horns, they need a way to set the inside length. If there were some muscles that could squeeze the inside shut at different places, then the horn could have different notes.

Brass instruments have lips that set the initial vibration and those vibrate at different frequencies. (see https://www.smithwatkins.com/library/science.html) (Or if you want far more information https://newt.phys.unsw.edu.au/jw/brassacoustics.html) That allows for far more notes to be played with the same length of tube.

If your devil had some voice box or even some flesh flap with a muscle at the start of the horn, then that devil could play quite a number of tones. If the insides of the horns had different lengths, then you could do quite a bit.

The real question is: does the tail have any way of making "music" and if so, what is the source of the initial vibration?

Not the answer you're looking for? Browse other questions tagged reality-check biology materials humanoid music or ask your own question.

19
Anatomically Correct: 4-legged sapient creatures (“centaurs” etc.)
22
Music from the Stars - How would a star-sound-machine work?
30
What qualities could a hominid evolve to make it a better farmer?
6
Without making any changes to the human neck, how large of horns could a human being support?
2
How could can humans evolve to have reptilian attributes?
10
Never-ending string kebab for a dystopian future
9
Designing a somewhat realistic "Astomi": Filter-Feeding Humanoids?
4
Is it realistic to have a sound-based naval identification system?
8
Is my idea of Wyverns realistic?
4
Making a portable fire flute with thermoacoustics