How can I justify the existence of massive zombies?

In my world some kind of virus/mushroom/parasite infected most of the population transforming them into zombies (so original!).

I need to put different kind of zombies in my world, and while I can easily justify the existence of faster zombies or slightly larger ones, I can't find a plausible explanation for extremely large conglomerates of zombies that form larger creatures (tank sized monsters).

The story is set in an European country, so I don't have access to large animals that would suit my needs.

I'm trying to keep my world as realistic as possible (following real biology), but I'd really like to introduce these larger monsters without resorting to aliens or Resident Evil-like artificial creatures. What kind of explanation could I give?

This occurred in mass graves and other situations with bodies in close proximity. The fungal body spread from one to another without breaking, because they were so close it treated them as one.

They are built things.

From The Colossus of Ylourgne, Clark Ashton Smith 1934.

But a cold horror clutched his heart when he saw the incredible, enormous thing that occupied the central floor: the colossal human skeleton a hundred feet in length, stretching for more than the extent of the old castle hall; the skeleton whose bony right foot the group of men and devils, to all appearance, were busily clothing with human flesh!

This great monster was built by assembling many bodies. If you read the story you will see that the bodies were collected by animating them from a distance, causing them to dig their way out of their graves and assemble.

People have been reanimating bodies a long time but Smith's story is the first I know of that laid out a big huge thing made of reanimated dead that was built on purpose as opposed to happening by accident. Dungeons and dragons has had things like this for a long time. 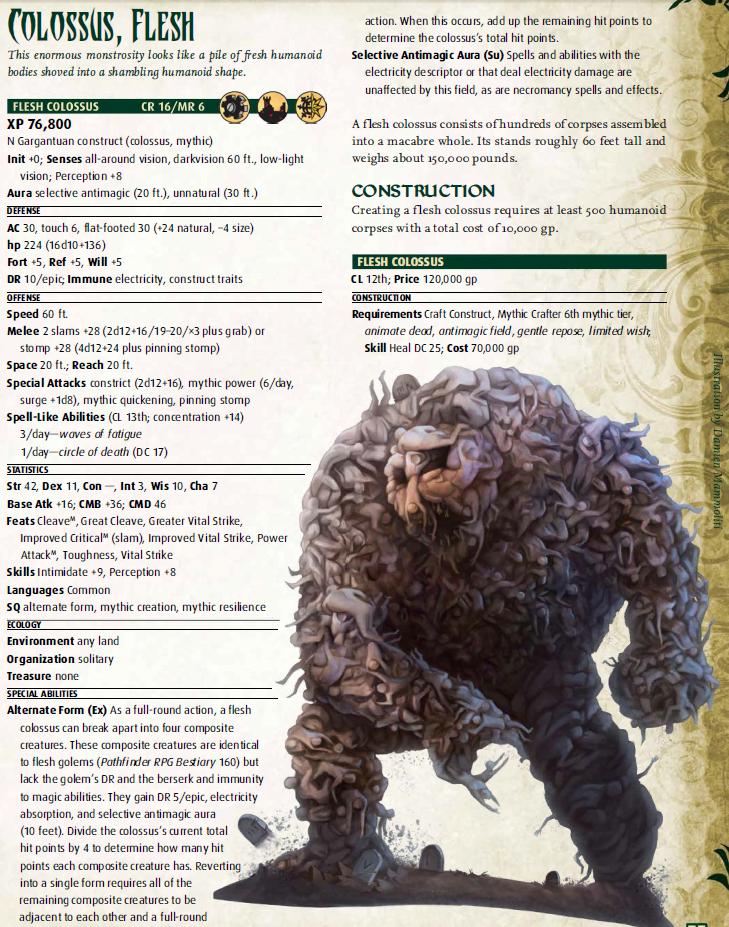 Image is from a previous answer of mine. I did not include link because it was doing sketchy stuff. You can google Flesh Colossus.

Why, one might ask, would someone with such skills make a thing like this? That is what stories are made of!

First, we need to determine what kind of zombie we're working with: 'live' or 'dead.'

Live zombies? Almost impossible. Not only do they lack the advantages of an undead (tireless, relentless, needs no food or water), but why on Earth would they link together or otherwise combine to make a bigger monster? What advantage would be conferred? Sure, with enough creativity, you could handwave zombie parasites, through chemical signals, communicating the need for 'something bigger' and making individual zombies weave their bodies together into one big zombie (or something similar) but...

Common sense dooms the idea. A tank-sized zombie, formed of human bodies, would likely collapse under its own weight. Instead of creating an effective vector/combatant, all that would result is a disgusting mass of gore. In my mind, I don't believe live zombies can do this unless...

With some sort of genetically engineered parasite or zombie, who knows? It's possible that a live zombie could either integrate cells from its devoured victims (sort of like a leaf sheep or blue glaucus) and mutate them into 'zombie' cells, therefore growing in size over time, making the big ones the smarter, more capable zombies of the bunch. This would mean that zombies would grow bigger and bigger over time, until they either die (if the zombie's too big, it could collapse or become unable to move or support itself via its vital organs) or reach some sort of biological cap on size. These zombies could possibly become tank-size, depending upon whether they can adapt for larger size, which depends on your zombie vector.

'Dead' zombies are dead bodies given a semblance of life through unnatural forces, like dark magic, demons, or evil spirits. For dead zombies, it make sense that 'destroyed' zombies could mass together into some sort of conglomerate monster, driven by resentment and malice, creating something like the Gravemind in Halo.

If you don't like that idea, maybe use a pseudo-science explanation or scientific magic. Magic in the Sword of Shannara series or ghosts and related supernatural phenomena would be the thing to research then. You might find some inspiration from that, you might not, but you never know!

Game Tactics: Please note, I may use this idea myself. Did you know cells can live outside the human body? Like, human cells? Thus, it's possible that as zombies are injured or destroyed in combat, their lost mass (ie. lost and infected cells) could mass together into their own organism!

If a parasite is the cause of your zombies, all sorts of monstrosities could result, or else gene transfer (which can and does occur between species) could be the cause. Slimes made out of green zombie flesh would be the most likely result, but what about chimeras? Rats, roaches, or even lizards eating creeping masses of gore could develop into horrific mishmashes of human and animal, the infected cells fusing with the native cells like they did for this pig.

So, hope it helps! (And that you don't have nightmares...)

A "hive mind" works by the individual entities communicating with each other, often using feromones, visual or audio communication, but dozens of biological systems can be found in nature of creatures that work in groups towards the same goal. Think of birds flying in formation and swapping pole position, bees in a hive, ant colonies etc.

When something in nature "controls" or "infects" people and makes them susceptible to this, they could work together as one hive mind.

You can have it that size of zombie is a product of time, so fresh zombies are regular size and the original zombies are now tank sized monstrosities.

You could justify whatever you want if you simply say that once the virus enters the host it starts expressing random genes while supressing others. In this case you could explain it by saying that statistically in one in every 1 million infected individuals the virus was activating growth hormone production to abnormal levels while introducing a myostatin defficiency which is responsible for genetic muscle hypertrophy in humans and animals. Both of those cases seperately are real but your zombie virus could combine them.

Its impossible to explain everything to the last detail because then you would have to become a doctor and a genetic engineer at the same time. For example, excess height makes bones and heart weak and a very big mammal has trouble regulating its temperature. You could find something that explains each individual problem that comes up but then i think it gets quite complex.

Tallest person to ever live

Not the answer you're looking for? Browse other questions tagged creature-design zombies .

27
How to import zombies into America?
11
How can zombies be explained without using magic?
13
Would a prion be the most likely cause of zombies?
2
How can zombies be made to race chariots?
9
How do I justify viral zombies not dying out?
12
How strong can zombies really be?