I have an ammonia planet that I want to have a desert spot. A hot desert. Can I tidal lock the planet to it sun and let that particular portion be hot? Or is there any other way? Or is it never possible with ammonia planets as they have to be freezing / frozen rocks.

Any help that makes the suspension of disbelief swallowable in this case...

EDIT: I am sorry for the way I phrased my question. The ice forms will be carbon based. So I am looking at ammonia to replace water. So ammonia will be the solvent supporting life. Oceans etc would be ammonia (in solid form when freezing and liquid when turned to liquid)

Based on how you asked your question, I'm assuming you're looking for solid ammonia (if that's wrong, please @jbh me in the comments so I can correct my answer). Ammonia freezes at about -78℃. The dark side of Mercury (which is tidally locked) is about -184℃, which if it weren't for other issues (like the world being too small to have the gravity needed for an atmosphere or the magnetosphere needed to protect the ammonia) is more than enough.

I believe a world the size of Venus or Earth having the gravity and magnetosphere needed to protect against the solar wind, tidally locked to the sun, would be more than enough to justify the suspension of disbelief needed to have a desert on an ammonia planet. In other words, the sun-side is a desert, the dark side is frozen ammonia. I'd hate to be standing at the terminator.

Note that a larger planet like could experience volcanism, which might be an interesting addition to your world. Volcanism would convert some of the frozen ammonia to liquid, and therefore rain. You're certainly going to have some liquid ammonia at the terminator where the hot sun-side and cold dark-side mix. That ammonia rain wouldn't constitute an atmosphere per-se, but it would add some cool interest to your world. In this regard, you could (suspension-of-disbelief) have almost any atmosphere you want. An oxygen atmosphere with solid ammonia on the dark side, little-to-no ammonia on the sun-side. Now, having said that, please note that ammonia oxidation leads to nitrification, or the development of N2O, which is a greenhouse gas. That might throw a bit of a spanner into the works — but don't let that stop you from having some fun. What it might mean is that the temperate zone around the terminator is simply larger than usual (if "usual" can be applied here).

Just work out the vapor pressure 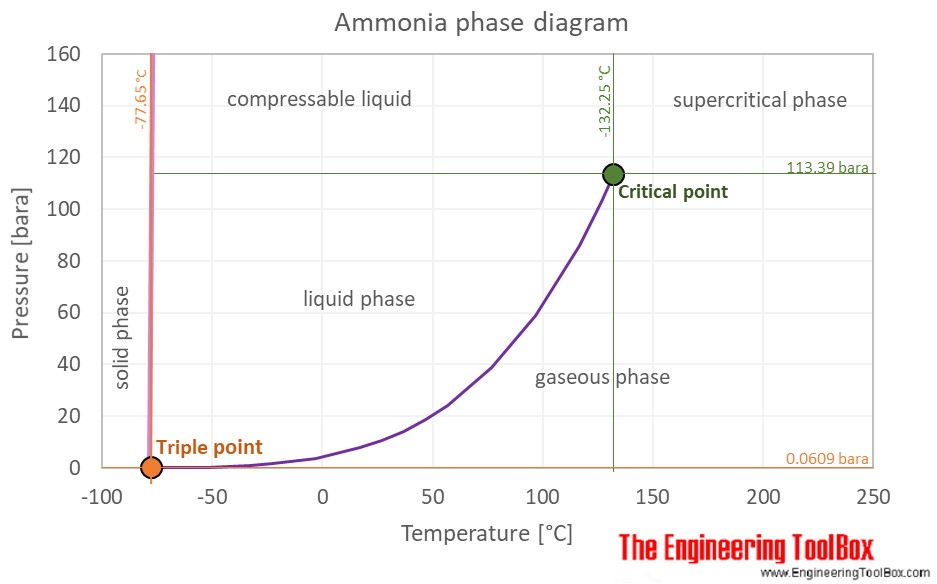 Above I've recycled an image from your other ammonia question, which tells more than you might realize.

Suppose your desert is a scorching 40 C. We look that up on this chart and it's maybe ... 16 atm. If your tidally locked planet has an atmosphere 16 times the pressure of Earth's, and there is a region over 40 C, it should be dry. At least, unless some perverse vagary of the world builder makes it lower than sea level - otherwise there could be a contest with inflowing ammonia, even a vast boiling planetary delta, but let's not get sidetracked.

The desert above isn't much like Earth's! On Earth we don't have a water atmosphere over water and dry land; we have an atmosphere with a slight amount of water over these. Our land is dry at far less than 100 C, and then we think a great deal about how dry. So how do we get there? Well, you'll need a second gas in your atmosphere. Nitrogen and hydrogen sound likely, though there are other possibilities. The point is, if your atmosphere is 100 times denser than Earth's, but only 16% is ammonia, then the ammonia will still boil away at 40 C. The vapor pressure of the liquid ammonia on the ground is the same, and if it's more than that in the atmosphere, it dries.

If that sounds like a lot of ammonia to have in the air for it to dry, well ... it is. If you look at water's diagram you see water starts off with a very steep curve, in log terms, so that the pressure at 373 K (1 atm = 101 J/L) is roughly 100 times greater than at 273 K. If we were using water at a high temperature near the critical point like ammonia, we'd have to have much more water vapor in the atmosphere to have an equilibrium of wet and dry.

Still, your planet can sustain wet and dry land. It can have deserts where the temperature is hot, or on high ground which reduces the vapor pressure of ammonia in the air and receives updrafts of expanding/cooling air from lower altitudes. (Frozen mountains are probably out of the picture, due to the red line on the left and the strong heat conduction of a thick atmosphere)

3
What are the limits on increasing atmospheric pressure on an ammonia planet to get liquid ammonia?

6
Can a terrestrial planet have a long lasting hurricane like the great red spot?
24
What effect would liquid sulfur oceans, sulfur dioxide in the atmosphere have on visibility, sound propagation and other environmental information?
6
Geography and Appearance of an nitrogen/ammonia planet
3
Terraforming an Earth-like Planet
4
Is an earthlike planet with ammonia oceans even plausible?
9
How could formamide lakes form on an exoplanet?
2
Is it possible to make a stable planetary system like this, and what would the orbits have to be?
1
how do you freeze an ocean to get a desert planet?
6
How can I get mostly-hydrogen-sulfide seas (with lifeforms in them)?
4
Habitable planet without oceans and with all rivers flowing towards the poles