Decelerating a relativistic, beam-powered starship at its destination without pre-established power-beaming infrastructure at said destination

As most of us know, accelerating to relativistic speeds requires truly astronomical amounts of energy. I have internalized that a ship carrying enough energy/fuel to accelerate to near-lightspeed by its nature also carries enough energy to destroy a planet several times over, even ignoring the fact that the near-C ship could just ram a planet to explode it rather effectively. The trick, though, is carrying enough stored energy onboard the ship to accelerate to those preposterous speeds, and then decelerate again at some point. Fuel has mass, and mass requires more fuel to accelerate it at the same rate as less mass, and so there is no way, in my understanding, to store enough energy aboard a ship to reach speeds like 0.5C, let alone 0.99C as is popular in these types of discussions. The answer to this problem is to not store the energy on the ship at all, but to beam it into the ship remotely. This is called beam propulsion, and is stupidly easy if you have something like a Dyson Sphere. I'm sure many of you are already familiar with this, but for those who are not, basically, a ship is built with large sail-like structures (think solar sails) that are targeted and fired on by intense and focused beams of energy that have access to astronomical amounts of energy, pushing the ship at a constant and high rate of acceleration for prolonged periods.

In the sci-fi universe I am building, Dyson Spheres, or stellar engines or whatever you want to call them, are common, albeit very expensive installations, and human civilization overall is very adept at beam propulsion, aided in no small part by their prodigious energy budget. Ships are sent between star systems at speeds often exceeding half of lightspeed (0.5C), and civilized space is formed into a network of these beam-powered routes that many of you might know as a concept called an Interstellar Laser Highway system. This works fine for traveling between systems with established infrastructure to speed you up at one end and then slow you down again at the other, but what about traveling to uninhabited systems where no infrastructure has been built yet?

In the setting, I have decided that energy can be stored as photons within chambers lined completely with a perfectly reflective substance, trapping photons indefinitely. This method of power storage would be extremely energy dense, and I have read that light confined in this way, at a certain point of energy density, will start behaving something like a gas, and exert pressure, establishing an upper limit to how much energy can be stored in these chambers. So, say we have a starship en route to an uninhabited system. It was propelled to about 0.5C by a stellar laser back in a nearby frontier system, and has been traveling for a few centuries now. I have been trying to figure out a way for this ship to decelerate at its destination, and have tried to avoid having it use the energy it has stored onboard, for fear that it will not be anywhere near enough, but I can think of no other way that does not involve magic or cartoon physics.

This question has multiple facets:

Your photon cage already gives you the most efficient thruster possible: a photon rocket.

Photons carry momentum (that's how lightsails work) so you simply open a hole in the photon cage and the outflow of photons creates thrust in the opposite direction. Specific efficiency depends on the mass of your photon cages and energy of the photons stored but if you want to do the math, see https://en.wikipedia.org/wiki/Nuclear_photonic_rocket for an explanation. The article cites a theoretical max efficiency of 300 megawatts per newton of thrust, which sounds like a lot of energy to store in day to day terms but possessing a means of directly storing photons (effectively 100% efficiency in photon generation relative to fuel stored) is maximally efficient compared to converting fuel to photons as in the nuclear photonic rocket or even an anti-matter powered equivalent.

[EDIT] So, here's some basic math to help you get started on your calculations.

Some of the incoming energy hits the sail you have left and pushes you, but the majority goes on by, hits the ring and is bounced back into your sail. You must decelerate fast enough that you're slowed to insystem velocity before the ring gets too far away.

Also, given that you are describing a system with many inhabited systems you could decelerate on beams from other stars that are able to bear on your sail. Better get the coordination right! 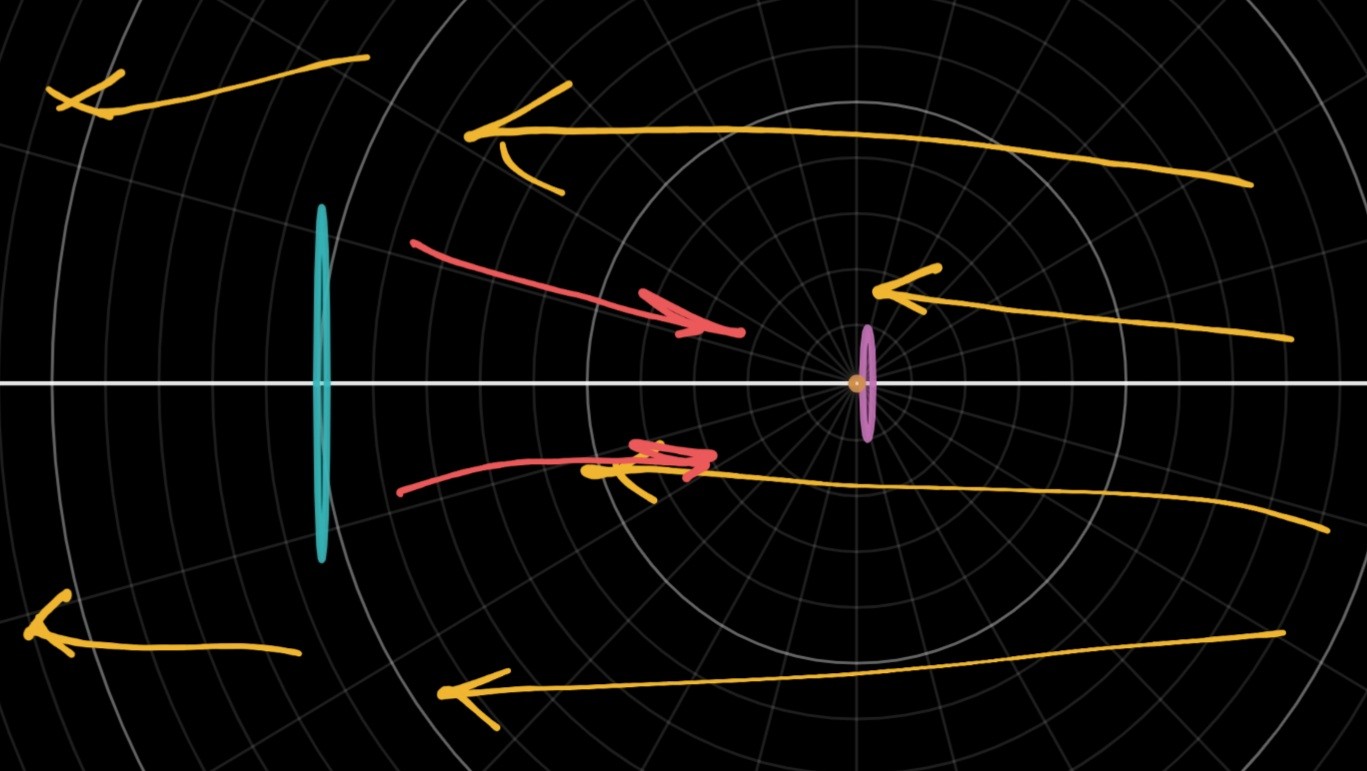 The pink sail receives light from both behind and in front, however, the blue sail is focusing more light down onto the pink sail's front, so the net effect is deceleration.

The blue sail, after detaching, will continue accelerating out into space. No way you're getting that back.

You don't have to have a photon cage at all.

So, say we have a starship en route to an uninhabited system. It was propelled to about 0.5C by a stellar laser back in a nearby frontier system, and has been traveling for a few centuries now. I have been trying to figure out a way for this ship to decelerate at its destination, and have tried to avoid having it use the energy it has stored onboard, for fear that it will not be anywhere near enough, but I can think of no other way that does not involve magic or cartoon physics.

Because the question about the photon cage's efficiency is motivated by this, I'm going to contest the premise entirely and open up the possibilities a little. Good news: someone did already think of one. It was called Valkyrie, and it centered on an antimatter beam-core rocket.

This kind of rocket carries big tanks of hydrogen and antihydrogen, and annihilates them to produce charged pions (and a lot of waste as neutrinos and gamma radiation). These pions are then ejected backwards; their change in momentum is opposite that of the ship, so the whole thing accelerates. While the acceleration is very low, you'll have years and years to slow down and eventually enter a parking orbit around your target star.

The biggest drawback of this design is that antimatter is expensive, but a civilization with multiple Dyson swarms for power should be able to create enough of it fairly readily through pair production. There are undoubtedly also engineering problems, such as how antimatter waste products will gradually transmute surrounding material. However, a one-way acceleration of 0.5c is tame compared to what Valkyrie or the multi-stage Frisbee designs propose for this kind of antimatter propulsion. It also violates no laws of physics, as your proposed electricity-to-velocity drive would, and requires no photon-trapping chamber at all.

in the science fiction book "The Mote in God's Eye" aliens used a laser to accelerate, then when they reached their target system, built up an electric charge on the hull of their ship. This caused the ship to precess around the galaxy's magnetic field. When the ship velocity had rotated by 180 degrees the aliens then fired another laser pulse to stop the speed all-together.

For something perhaps less reliant on undiscovered physics than a photon chamber, try the Bussard Ramjet: you generate a miles-wide magnetic field ahead of the ship that funnels and compresses interstellar hydrogen into your spacecraft. Due to the speed at which the hydrogen is compressed, it undergoes nuclear fusion, propelling the spacecraft forward. To decelerate you can use the magnetic field as a magnetic sail, and shape it so that it no longer causes fusion.

You send a decelerator up ahead.

The energy you have stored is probably not enough to slow down the entire ship. So you have modules that you shoot up ahead that slow down and begin shooting you with those same lasers that brought you up to speed in the first place.

Then you have that decelerator make more lasers and eventually you have set up a new branch of the laser highway on the go. This does mean you will need the ship to be specialised to include these decelerators. But you could also just have a highway building ship be sent up ahead of the main passenger ship.

Just make the light bend back on itself.

Not the answer you're looking for? Browse other questions tagged technology science-fiction hard-science space-travel propulsion .

22
What is the most effective way to brake from interstellar speeds?

16
Gravitational slingshots: could they be used to decelerate a spacecraft traveling at a small fraction of light speed?
15
How to “set” the lightsail?
6
Powering the interplanetary trade ships of the 23rd-24th century
3
Can midcourse flip pose danger at relativistic speeds?
6
Help cooling living H$_2$ fueled pulse jet engine
7
Is this a plausible interstellar propulsion system?
7
Are purely electromagnetic propulsion systems feasible at all?
10
Proper combat distance scaling for a sci-fi space opera tabletop setting
14
Does the sun provide enough energy to accelerate a large ship to a decent proportion of the speed of light?
0
How hard scifi is a graviton gravity drive?