I have created a tall mountain range and am creating a forest on one side and desert on another.

As @Willk suggested (blessed be), i will extend a bit on my comment.

What you described is a common phenomenon when an humid air mass from the sea encounters a natural barrier like a mountain range. The air rises, is unable to go through and falls in one side as heavy rains.

At the other side of the mountain range, zero or reduced rain ever falls. Forming a Rain shadow.

In places near the tropics, the high amount of rain in one side contributes to the formation of heavily forested areas, while the other side is prone to desertification.

The picture above is of the Tibetan Plateau, with the Tarim Basin being the deserted area, a subtropical forest area below and the Himalayas between them. This is an example of a combo for a colder climate like you described. Both the forest and the desert area are colder!

For another example, we have the division between the Amazon Rainforest and the Atacama Desert: 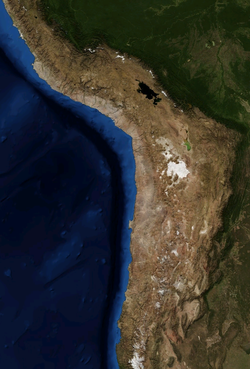 At one side we have the famously hot and humid Amazon Rainforest on Bolivia, while at the other there is the Atacama Desert, perhaps the most arid place on earth while being cold! The secret here is that the coastal Chilean mountains blocks air from the ocean also, creating a Temperature Inversion making the desert frigid.

In essence: Yes to both questions!

Here is a link to an exceptional article from Wikipedia detailing rain shadow. 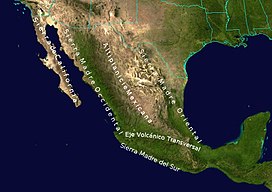 This is the Chihuahuan Desert (and surroundings), a hot region surrounded by stretches of forested area. In fact most desertic areas of North America are pretty hot and suffer from the effect of rain shadow from the Rocky Mountains. While I suspect the greens around are not rainforests per se, they could be in your world, no problems!

The natural rain shadow has been mentioned, but the science and magic tags suggest a more fluid answer. That could simply be created and then explained in passing, sometimes not even explained. In the Scorpion King, he make a pact with Anubis who suddenly creates a massive oasis for him, and it works because the plot doesn't depend on it. You can do most anything with god magic or alien tech if it is a feature of the setting not a plot point.

Not the answer you're looking for? Browse other questions tagged climate geography deserts .

7
How would a 30-kilometer tall mountain on an Earthlike planet look?
8
What is the tallest mountain possible in any gravitational environment?

10
A really (really, really) big cliff
7
Constructing a desert area
9
Are my deserts accurately positioned?
7
Can my land-mass realistically work?
2
Does my climate map work?
4
Are the deserts in this continent realistically placed?
5
Is The Climate Map for My Alternate Earth Accurate?
4
Climates of a Eurasia-like continent in the tropics
7
Can I eliminate a dry continental high pressure spot inland by adding a huge body of water in the middle of it?
3
Is my large tropical continent too dry or not dry enough?