Usefulness of a weapon based on throwing hot water

The people of my flat medieval fantasy world have found a rune that generates infinite boiling water, and they want to use it to kill each other. Sadly the water cannot be made with momentum included, so they have to find an effective way of throwing the water to the enemy.

In one of their attempts they tried putting it inside a hollow metal cylinder, link one end to a set of chains that is connected to a long stick and make a hole in the other end of the cylinder. Basically making a pseudo-flail that when spun would spray hot boiling water out of the far end.

Assuming they are fighting in a flat tropical environment, how effective would this weapon be? As in how far can this weapon reach and how much armor can it penetrate while still causing second degree burns?

Edit: The rune creates boiling water from nothing, so no water needs to be carried. The water is created continuously at a rate around 0.1 litre per second. For the size and weight of the weapon, it's similar to a two handed flail though maybe with a slightly bigger head.

Water doesn't penetrate armor. Your flail would be roughly as useful as trying to throw tubs of hot water at your enemy. Except you'd also get hot water on your own allies.

Use an enclosed space with a nozzle

Place your water making magic thing inside a sealed metal box, and punch a small hole through it. Water is generated at 0.1 L/s, which mean 0.1L/s of water has to go out of the box. With a small nozzle, you can create a fast stream of water.

Depending on the ability of your smiths to make good holes in boxes, you might be able to make a water-jet cutter.

Forget about the tactical value of this gadget and appreciate its logistic value.

Medieval armies did not encounter most of their losses during battle. Most losses were due to disease and starvation. If you can avoid that, then you can join every battle with more soldiers than you could otherwise, giving you an unique strategic advantage.

Medieval armies didn't carry many supplies while on the march. They were living "off the land". They ate and drank whatever they could find or take form the local population. This rune provides an army with an infinite source of clean, potable water. They can either use the still hot water to cook, which makes more sources of food available. Or they can let it cool down and drink it, which completely eliminate the need to acquire drinking water.

Not having to scavenge as much for food and firewood and not at all for water is certainly convenient. But far more importantly, it prevents any losses from water-born diseases like cholera!

Soldiers can wash themselves and their clothes with hot water every day. This improve in hygiene will prevent spread of disease. But it will benefit the wounded soldiers in particular, who will be at a much lower risk of dying from infected wounds.

And having a portable source of heat might with some creativity even enable you to do what most medieval generals tried to avoid whenever possible: Marching during the winter.

This logistic benefit will save more soldiers than it could save if weaponized. So no smart general would ever risk using such a valuable device in battle where it might fall into enemy hands.

There are several approaches to this problem.

Hand weapon: Probably not worth it

There is a history of pouring hot water and other substances over the heads of attackers during sieges, but that requires having the high ground. You mention that your world is flat. You can't throw water as far as a solid aerodynamic object, so an enemy with an atl-atl could kill someone without getting burned.

The weapon you describe could deny an area to an enemy, but you could probably do the same thing with a nasty set of spikes or by digging a trench. 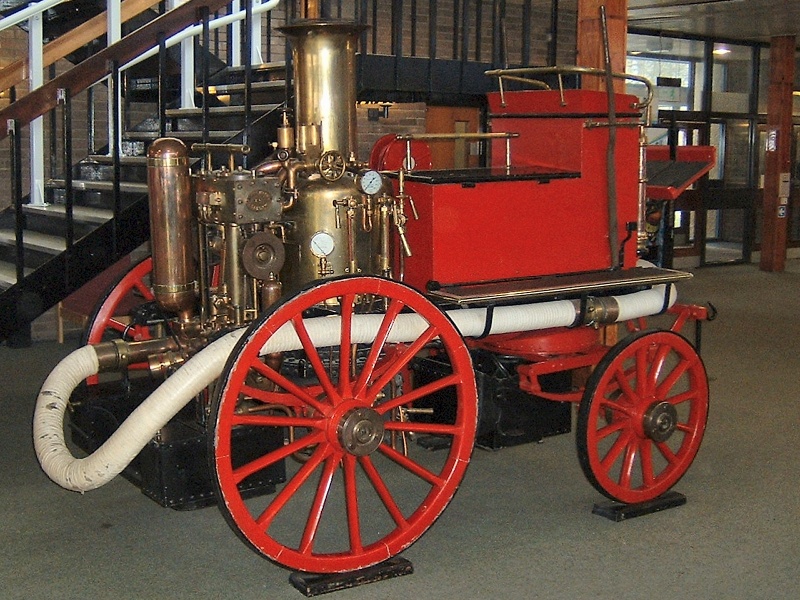 This is a picture of a steam pumper from around the turn of the 20th century. Steam is massively powerful. How powerful? Well, it powers modern aircraft carriers. If you had the ability to make machines, you could harness the power of steam. You could create a working steam cannon or maybe even steam machine gun. Using steam to push solid projectiles will be much more effective than using water as the weapon.

Suppose this rune can create boiling water at 0.1 liters / second on a particular spot. To kill a person with that, that spot must be near, or inside the body of that person. The temperature would be unbearable and when water is materialized inside the body, e.g. while penetrating, pressure inside the body would cause havoc, killing the enemy very quickly.

The rune can be engraved on the blade of a spear, sword, or knife and enhance the weapon's effectiveness. In this proposal no transport is needed. The tip of the blade starts releasing boiling water as soon as human skin is near, or contacted.

Note: I'm not a game expert. This application of your boiling water rune derives from the real world meaning of the word "rune" and a tradition of having magic runes engraved on weapons, like medieval blacksmiths did

This is likely to be a frustrating thing to use for attack, but as a defensive tool, I suspect it will be quite useful.

So how can this be made into a useful weapon? You have a couple big advantages, but they're both likely defensive.

A blacksmith's bellow seems like the perfect weapon assuming you could modify the accordion to withstand boiling water and can wait long enough for it to fill up between attacks. I think leather would work. 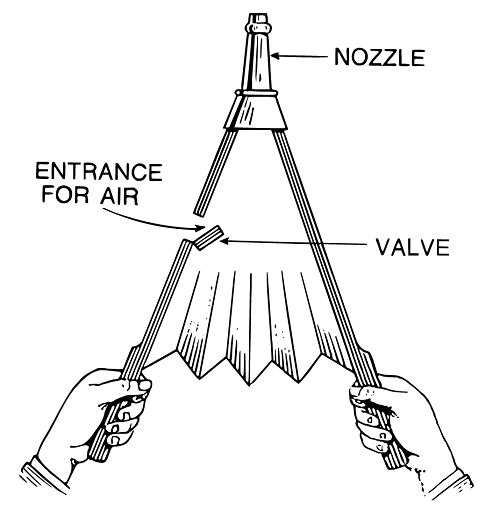 Fill a tank of air at ambient temperature, seal it tight. Then activate the rune, which applies heat externally to the container, likely through direct contact with the boiling water or indirectly using just the steam. The air inside the tank expands, creating a pressure within the tank.

Then you pull the trigger, opening the valve, which releases the pressure down the barrel of the gun.

As for details of the weapon, I'm not much of an engineer but I imagine the rune would be attached to a hose or a pipe which is wrapped around the air tank and then just pours the water onto the ground. The water will have imparted heat onto the tank as it travels the length of the pipe and the cooled water is no longer needed.

To not injure the operator of the weapon and to improve the heat transfer efficiency, this tank and pipe would be enclosed within an insulated outer shell.

Since this weapon is constantly spewing water (at least in my flawed design of it) it would work well as a mounted gun on a wall or vehicle, where drainage could be managed as part of the structure.

Other than weaponry, boiling water is the key to any number of steam-punk inventions.

Edit: After doing some math, you would need to hit 17000 degrees Celsius inside the tank for the pressure to be the same as an airsoft gun. Which doesn't even shoot at lethal speeds.

Using purely thermal expansion to create pressure isn't enough. Include some kind of hydraulic piston that compresses the air inside the tank.

It could be more effective as a personal weapon if you stored up a gallon of boiling water that you could throw at the enemy all at once. Perhaps the weapon would be a staff like a giant ladle, continually gathering boiling water in the cup that you can throw at enemies from melee range. You'd aim for the eyes to blind or disorient them, and to actually kill them the weapon would also need a blade or a spike at the end (or a buddy next to you with a warhammer). You and all your nearby allies would need to be well covered to protect against accidental self-burns, e.g. using fine mesh eye holes in your helmet to help keep the water off your eyes, and you'd have to hope your enemy is not armored in the same way.

Even a bad burn is not going to kill or even disable your opponent in the short term unless you get them squarely in the eyes. When burns kill, this is due to infection over a time scale too long to matter in a fight.

It might be most practical to simply attach the rune to the end of a normal warhammer or other weapon, while yourself and your allies are thoroughly covered up. You would fight as you normally do with your weapon, occasionally flicking some of the boiling water towards the enemy's face to make them flinch or shut their eyes for a moment. This at least would be a strict improvement over just the normal weapon by itself, even if the boiling water is relegated to a distraction role.

Not the answer you're looking for? Browse other questions tagged magic weapons low-fantasy .

2
Supernova Rifle
24
How to build a Blood Gun?
6
Short-term Miniature black hole weapon and its effects
4
What would be the ideal way to weaponize plasma?
10
Diving into water to escape lightning attacks
8
How effective would a pole-arm blunt weapon be?
4
What kind of wounds would a pulsed laser weapon really create?
2
Would this giant rotating shotgun weapon be effective?
3
Usefulness of Synergy Enchantment
6
ETCs, macron accelerators, and plasma cannons! Viable alternatives to the same old space weapons?