Hydrodynamics Question: What happens to water when you apply different extreme pressures?

I am building a magic system with a few components. One of them is built off a magical "touch stone" that interacts with an otherwise untouchable shadow race. I've decided to have a special quality about this stone be that it emanates a "bubble" when electric current is passed through it.

Inside this bubble, (while the electric current is still present) no physical material can pass through. The two exceptions are organic material; where organic material will "break" the bubble, and the shadow race; where they can be contained within a bubble.

This question is related to the properties of water. If water were contained within a bubble, and then the current were to lower, this would decrease the volume of the bubble but not allow any material from escaping.

The question is: assuming all else can fluctuate, what sort of pressure shifts would require the water to change phases? What pressure changes would cause the water to shift to gas or ice?

Also - what kind of temperature shifts could you expect from these pressure changes?

As explained by L.Dutch, at room temperature, you'll need a pressure above $10\ kbar$ to obtain ice VI (not your standard ice). This is indeed a high pressure, but due to the low compressibility of water (relatively to gas, that is), it does correspond to a quite small change in your sphere radius.

A sphere of water with an initial radius of $10\ cm$ will turn to ice when the radius reached $8.7\ cm$. We can have an idea of the energy required to do the compression:

For this same sphere with an initial radius of $10\ cm$, it is $W = 730\ kJ$ of energy. If all of it is suddenly released when the bubble is broken, it will be enough to kill everyone in the room.

What happens to water when you apply different extreme pressures?

The info you are looking for is contained in the phase diagram, which basically tells you what phase is a given substance in, given temperature and pressure. If you look at the one for water 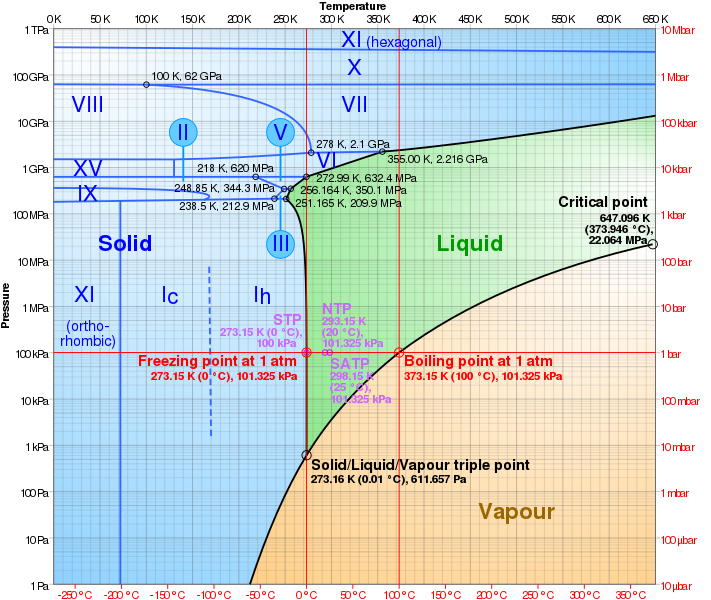 you will see that, at around 25 C you would need a pressure above 1 GPa to have solid water, while you would have vapor below 3 kPa.

Now this is beyond my Physics abilities, but I'll sketch out what extreme pressure could do.

This means if you take water and reduce volume, pressure goes up and work is done, and the pressure will resist the volume reduction.

The work done by the reduced volume will generate a lot of heat.

If you continue to compress water, the energy requires diverges, the temperature diverges, and you end up with not-water. If you reduce the volume of water by a factor of 500, you get a density similar to a stellar core; the oxygen and hydrogen will long be no longer forming conventional molecular bonds (ie, not be water). I haven't done the math, but the temperature is likely to be high; the result is likely to be fusion. This will in turn generate even higher tempuratures.

Continued application of pressure without regard to how hard it is will compress the matter further. Electron degenerate matter has a density of 10^9 kg/m^3 or 10^6 g/cm^3, 1 million times more dense than water. Normally this occurs after most fusion has ended (because the heat of fusion prevents further collapse); as I am assuming your magic is absolute, you end up with heat values that are simply ridiculous, as fusion "inflation" isn't able to stop continued compression.

Compression at this point results in electrons not having states to shift into, so they merge with protons to form neutrons. These neutrons will be unable to decay, because the electron states are all occupied (that is what "electron degenerate" means).

Further compression will reach neutron star density, which is 10^8 denser.

Beyond that there is no known process that stops before a singularity occurs.

Going to 1 mm^3 is another factor of 1000, which gives you some neutronium.

For less absolute cases, we can work out what the pressure-volume relationship of water is.

The pressure is force per unit area, the surface area of the compressing chamber is the area, the distance is determined by how much the water compresses. This gives a force times distance, which tells us how much energy is involved.

Here is Dr Joule working on that exact problem, experimentally, 163 years ago.

Not the answer you're looking for? Browse other questions tagged magic physics water .

3
How long would it take us to detect a Deimos-like object moving towards Sol from Alpha Centauri
26
You're superstrong but you still weigh the same. What happens when you hit things?
8
Magic: Reality check of effects of mass-altering magic
19
Is it possible to place a permanent probe on Uranus?
2
Could a habitable gas giant with an electropshere exist?
1
Changes to water worlds to make them habitable
3
How much sand is required to create a fluffy barrier?