This question is inspired by a comment in this video that the official war historian of the Battle of Cresson describing 140 knights attacking an army of 7,000 as "an experience that will turn black hair grey" FOR THE ARMY OF 7,000! (the knights were defeated, but in the eyes of the commanders that outcome had not been certain)

Or this video explaining how 400 knights and some rounded-up peasants slaughter 90 PERCENT of an armed force of 20,000 soldiers.

It seems to me that if you're getting 70:1 or 50:1 force multipliers for these kinds of soldiers in historic combat, then I need to re-assess what made this kind of amazing effectiveness possible.

I feel like D&D may have spoiled my understanding of fantasy adventure settings because it blends in several centuries of technology into the same setting.

How feasible is chain armor at it's peak (early 12th century before custom anti-chain weapons are developed in the 13th century)? What other misunderstandings might the average consumer of fantasy literature have about 12th century combat? 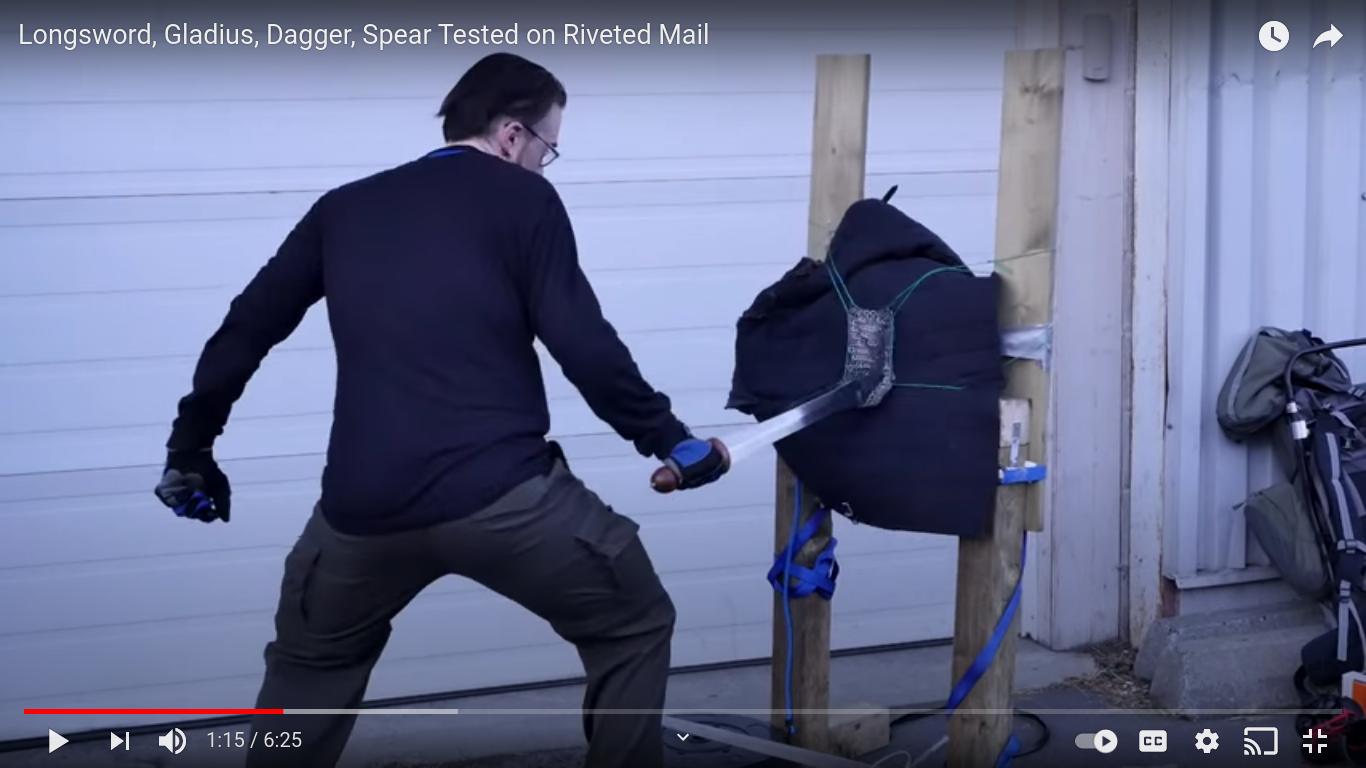 Here is a video of someone testing riveted chainmail against a variety of 12th and 13th century weapons, including towards the end weapons custom-built to defeat riveted chains. As you'll see in the video, nearly every weapon is ineffective. Even spears basically required multiple hard stabs to create the tiniest cut. This means, against an armored knight in combat, in order to kill someone wearing this kind of protection, you needed to hold them down and stab them repeatedly... like an awful lot.

Chain Mail is Prohibitively Expensive for the Poor Adventurer

According to some other articles, squires and knights alike (full time soldiers) wore the same level of protection. According to the Medieval Price List, a suit of chain cost between 1,200 pence (100 shillings / 5 pounds) to 1,920 pence (160 shillings / 8 pounds). This was equal to between 4 and 6 years wages for the common field hand!

Cheap weapons, at a few pence, were much easier to provide than good armor.

Your average "infantryman", then, has maybe held a sword once in a county fair. Maybe he bought one. He may know how to throw a punch or use a knife or bow to kill game. He's is unarmored, barely armed, and as far as morale goes only around for as long as he stays motivated to hang around.

There were other types of armor around in the 12th century: like scale mail which was tougher than chain head-on, but if you were trained, could be defeated easily with upward strikes only. Or lamellar armor of tiny plates all stitched very close together, which was best attacked in-between plates.

An army of 20 thousand hastily recruited volunteers who'd been assembled so quickly that you couldn't feed them very likely did not know these things. Or, even if instructed, probably had not really internalized what they needed to do when a certain kind of technology was up against them on the battlefield.

Oh, By the Way, There was No Special Stroke for Chain

Until specialized weapons were invented with long narrow points to go inside the rings, there was no up-stroke, or between-the-joints stroke to defeat chain.

In the 12th century most European soldiers that were provided it wore long waist-length and arm covering sheets. The legs and hands were unprotected on the average soldier, although some spared no expense to cover hands, feet, and legs.

In a short to not re-tread

The Simple Answer: Yes. First any armor is better than none. Second, it isn't just chainmail, it is chainmail with a padded gambeson giving two layers of armor (that was custom and well fitted), and Finally, if it wasn't feasible they would have not continued it. The reward was greater than the cost so it was well worth it, you could die.

The important thing to mention in Medieval warfare life this is that the vast majority were killed while fleeing. The side that broke first would take massive casualties afterwards. Hence a small disciplined force with good morale will always beat a bigger, undisciplined for with poor morale.

The killing might go on for some time after the 'battle' is over.

The weapons and armour count for much less than people think.

Not the answer you're looking for? Browse other questions tagged reality-check warfare medieval or ask your own question.

5
What kind of weapon would enable fairies to defend against the invading 13th century medieval army?
12
Widespread propaganda in a fantasy medieval setting
3
What are the priority plate parts to reinforce chainmail other than cuirass?
10
Knights vs elvish guerillas
1
How to go with "convert and convince" tactic in post-apocalypse settings?
13
Arrow proof medieval glass
26
With 12th-15th century technology, is a "vending machine" possible?
3
distances between communities/cultures in fantasy world, approximate to 12th - 13th century
2
Feasibilty of binary planet having life